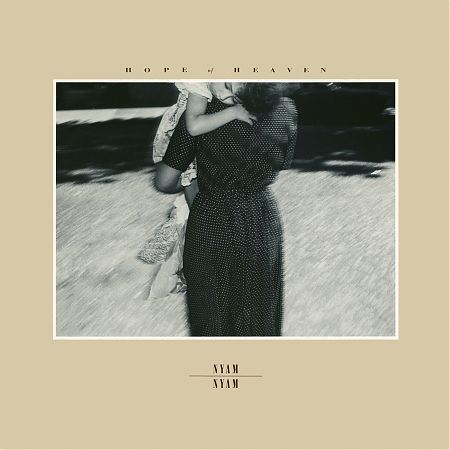 If you think that the sleeve from this album looks like a 4-AD one then you’re on the right track as Hope Of Heaven was originally released in 1984 on the Situation Two-label (which was back then owned by 4-AD). But that’s where the comparison stops as the music from the Hull boys can’t be properly described. That’s probably why Nyam Nyam never really made it, but because Peter Hook got hooked (hey, that’s a nice one!) on their self-released single When We Can't Make Laughter Stay the band could claim some cultfame.

As LTM picks up everything that has a Factory-connection the godlike label has now reissued this forgotten longplayer added with The Architect EP, the 12”inch Fate/Hate (released on Factory), the rare debutsingle When We Can't Make Laughter Stay and even a brand new song Doubt.

If you hear this album you’re struck by the fact how many classics (that never became classics anyway) Nyam Nyam wrote. And To Hold sounds like a perfect John Cale-track, while Mining Different Seams is as splendid as a The The-song, and be honest: if that aren’t good references then we don’t know! And we even haven’t mentioned This Is The Place which is the best song Microdisney (in case you know ‘em) forgot to compose.

Difficult music which is probably created by difficult people, but there’s also some Factory-pop in Fate/Hate to be heard which is their best known track, and of course it sounds a bit like New Order. Soon after the band disbanded while vocalist Paul Trynka became an editor for the musicmag Mojo.

All what’s left now are memories from something what could have been. But still, we thank LTM as they reminds us of that. Great reissue from a band that deserves to be heard, even if it’s 30 years later.