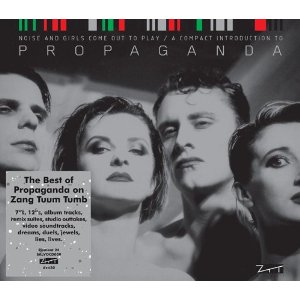 Noise And Girls Come Out To Play

It seems like only yesterday that this writer was assessing a Propaganda reissue (Wishful Thinking, the band's long-forgotten remix-partner to their hugely-revered debut A Secret Wish) - in fact it was a few months back, but that hasn't stopped Ian Peel and his insatiable passion for all things ZTT, in particular Brucken, Freytag, Dorper, Thein and Mertens, colluding for more vault exploring and compiling.

Noise and Girls is essentially a round-up of previously-unissued snippets from the many different variations of Propaganda's stately singles, as well as familiar full-length and half-length versions of the obvious, such as Duel, Jewel and several extracts of Dr Mabuse that does smack of overkill by about the sixth take. Of greater interest to collectors are the so-far unre-released treasures on here, such as Lied, originally included on the Duel double 7", a few mixes of their lush militaristic cover of Velvet Underground's pretty Femme Fatale and an outtake variant of another cover, Josef K's excellent Sorry For Laughing.

Interspersed are short extracts from various sources, including a handful of Testament splinters from the Mabuse archives, plus a couple of video mixes for Mabuse (again) and perhaps their biggest Euro-hit, P Machinery, basically edits not far removed from the radio or album versions, with added dialogue or intros. A rare take on Frozen Faces also makes an appearance, giving an element of depth to a compilation that stretches even the ZTT ethos of remake, remodel and remix.

Overall, completists will revel in the detail, but the casual and the curious may shrug and head to that classic debut album instead. Don't bet against another collection rearing its head in due course....