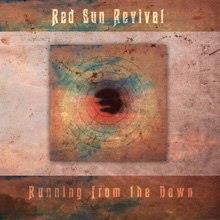 Running from the Dawn

Im not the first one and I won't be the last one to say that Red Sun Revival has at least been inspired by Fields of the Nephilim and The Elusive (not only because of the nice voice, the retro sound and the synths).

The album has been mixed by Steve Carey (The Eden House) and mastered by the greatest of all: Andy Jackson (who produced the Pink Floyd album 'The division bell'). I was fast keen on this album, for sure once I was able to forget the ressemblance with Fields of the Nephilim (and I love the retro guitar sound, just as the violin).

People who know me also got the picture: i love melancholic music and here I feel like homecoming and yes: it got me hooked!

'My child' will always be one hell of a good starter! Oh so retro, but oh so efficiently good! A few songs later I even hear one of my favourite bands coming back as a certain influence: The Elusive in the song called 'Lost for words'.

'Last chance' sounds more like dream, with a nice sliding guitar and a hypnotic sound. 'Wide awake' has a funky guitar in it, but the lyrics are keeping it bloody and icecold, so no mistake on this one!

'Miracles' has, despite the title, more of despair than having faith in a good ending. The Elusive took me away and it wasn't an illusion. I know for sure that this band has a great future!

Next reviews
BLUTENGEL • Save Our Souls EP
LEGEND • Fearless
LINGOUF • Terre De Pierres
2012 REVIEW • Chris Konings: Organic in the best albums of the year
• On The Road
!DISTAIN • 20th Anniversary
2012 REVIEW • Phil Blackmarquis: Full review with comments and links
2012 REVIEW • Peter Mastbooms (BORG): And the winners are.....
AI WEIWEI • Never Sorry
PORTION CONTROL • Review of the concert at the BIM Fest in Antwerp on 14 December 2012