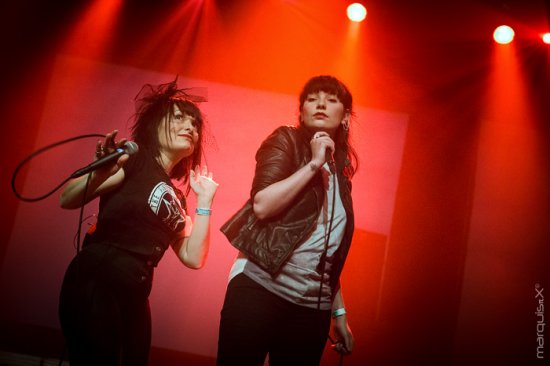 Third band on the bill on Day 2 of the BIM Fest was Simi Nah, a female French musician, songwriter & vocalist from Nice and ex-bass player with Praga Khan. Her partner in crime is Kenny AKA Scuzzy, a musician, songwriter & producer from Oostende. He also was a DJ, drummer and guitarist (in the '80's) and engineer at Samurai Studio’s London with various artists like The Mission, Boy George, etc... The third member of the band at the BIM Fest was Safyée, aka Alice, the daughter that Simi Nah had with the late Micky Mike (Snowy Red). The project "Simi Nah" was started in 2003 and released two albums, “Cherchez La Femme” in 2004 and "5" in 2012.

It was Simi Nah's second show in Antwerp this year as she supported OMD at the Rivierenhof in August. On the stage of the Trix, the three musicians gave a more alternative show than the previous one. As Simi told us in an interview after the show (see video below); "Here we chose the songs which fit better for the BIM Festival". Scuzzy also slightly adapted the arrangements and the sounds to make the music more punchy, more 'dark'.

On stage, Simi Nah presents a very wide spectrum of music styles: you think about Absolute Body Control, Kraftwerk, Gainsbourg, Mylène Farmer, Miss Kittin', Vive la Fête but also more darkwave-EBM bands like DAF. Simi has a passion for fashion, old movies and cabaret and it shows! You get nice looks, stylish visual art, luscious vocals and a lot of fun and humor! The band started with "Coco ChaRnel", a title that says it all, followed by "Sans Se Voiler La Face", an electro killer song that made the audience move.

But the biggest highlight of the show was a complete surprise: Safyée (Alice) sang a cover of Euroshima (Wardance), as a tribute to her father, Snowy Red, who died in 2009. It was the first time the band was playing this. The band was very faithful to the original song; only the sounds, esp. the drums, were a bit adapted to sound more modern. A very touching moment! Watch it in the video below...

Note that the son of Snowy Red, Michael (Weyrd Son), who was in the audience, is currently preparing a tribute CD to Snowy Red with acts like Animal Bodies, Bestial Mouths, etc... Can't wait for this!

To close the show, Simi Nah played "100 Visages" and during the encore, they beautifully covered "Alice" of The Sisters Of Mercy. Here again, the sound was amazing, very clear and powerful and Simi's vocals, impressive. At the end she managed to grab a very high note! This cover can be found as hidden track on the band's first album. As a whole, this was a very cool show both musically and visually! A nice surprise!

The band gave us an interview after the show: check it below. (sorry but the video camera broke down in the middle so the 2nd part is only audio)