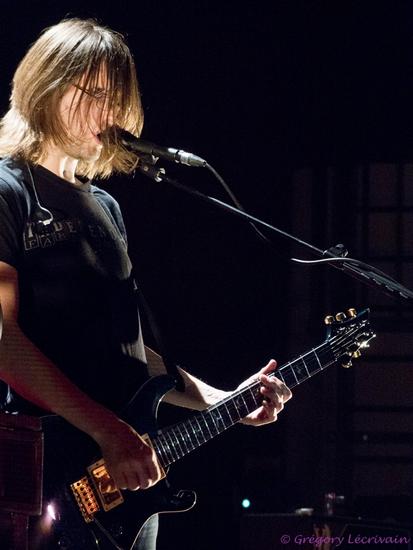 Steven Wilson, founder and mastermind of the English prog-metal band Porcupine Tree, obviously likes Belgium! It was his second concert in our country in 6 months! The previous one took place in Antwerp and was part of a tour to promote his new album "The Raven That Refused To Sing (And Other Stories)". In Leuven, he gave a somewhat similar concert but with novelties like a new, unreleased song and several changes in the show.

The venue, "Het Depot", was sold out and packed with a wide variety of people. Funny how Wilson has extended his audience from a pure prog-metal following in the Porcupine Tree period to a fan base now of different ages and styles, from the old prog-fan to the young dream-pop lover.

The introduction of the concert was weird. You could hear the ambient music of Bass Communion, one of Wilson's numerous side projects and on the stage, there was a projection of a film showing the life of an ordinary street in England. Very slowly, the long film (which lasted more than 20 minutes) showed a busker, i.e. a musician who plays in the street, drop his guitar case, light a cigarette and finally take his guitar to start playing. At the same time, you heard the sound of a live acoustic guitar and Wilson appeared on the stage playing the chords of "Trains", the famous Porcupine Tree song. The acoustic version was very nice and loudly acclaimed by the audience.

Then the other musicans took the stage and started the first 'tour de force' of the evening: "Luminol". Like in Antwerp, the band was composed of former Kajagoogoo bass/stick player Nick Beggs (he also played with Steve Hackett), keyboardist Adam Holzman (who played with Miles Davis!), flautist / saxophonist / clarinetist Theo Travis and the new (brilliant) guitarist, Guthrie Govan. Marco Minnemann, on tour with Joe Satriani, was replaced by Chad Wackerman, who played with Frank Zappa and Allan Holdsworth.

With "Luminol", we were plunged back 30 or 40 years ago, in the times of King Crimson, Pink Floyd, Yes, Rush, Todd Rundgren/Utopia and other Van der Graaf Generator. Barefoot as usual on stage, Steven Wilson was standing with his guitar in the middle of his new super-group like a conductor, highlighting the major impulses and stimulating musicians.

Before the second song, Wilson welcomed everybody and said he had never heard of Leuven before but "it's a most beautiful town"! He then played "Postcard", a very conventional pop song, followed by "Holy Drinker", a second progressive masterpiece with strong guitars, different sequences including an incredible chorus with psychedelic minor chords played on mellotron and a tragic ending with dark drones and guitar licks: a great moment.

Then Wilson explained to the public that he can't read music (he plays by ear) and is far from being a technical specialist of effects and gear. So, to communicate with trained musicians like the guitarist, Guthrie Govan, he created a vocabulary to describe sounds, eg: "A lonely Suede lost in the forest", a very soft, jazzy guitar sound à la Camel (cfr "Ice"), which, he said, is extensively used in the next song: "Drive Home". A great introduction for this beautiful ballad but as usual with Wilson, the ballad evolves into something else, in this case a break with jazzy guitars and a clarinet which made me think of Sting and Branford Marsalis, followed by a fantastic guitar solo by Guthrie Govan, who has a very fluid style, a bit like Allan Holdsworth, UK's legendary guitarist.

The last song of the first set was a new, unreleased song, which Wilson called "German Bite" but apparently, he changes the name and the composition of the song with each concert. It began like a trip-hop-ish, Massive Attack-like theme and then transformed into a prog-metal piece reminiscent of Opeth, all this combined with jazz-fusion interruptions on the piano and the flute. Nice!

At the break, a transparent curtain came down between the stage and the audience and a video with the face of an old man was projected: it was "Watchmaker". Acoustic guitar arpeggio's reminding us of early Genesis music led us into this soulful composition, which developed into a jazzy improvisation and ended in a prog frenzy à la Yes. After "Index", they played "Sectarian", an instrumental evoking clearly Rush ("YYZ"), during which the curtain fell on the floor, provoking a loud cheer in the public.

Then it was the beautiful "Harmony Korine", a song named after a famous American Director that Wilson describes as "twisted"... The public showed enthusiasm, and not without reason. This a very accomplished, nearly 'mainstream' song: a guitar intro à la U2 and a melody reminiscent of "Exit Music For A Film" by Radiohead, but with Wilson's indelible trademark.

After that, Wilson talked about the 50th anniversary of the mellotron, the ancestor of the sampler. He asked Adam Holzman to give examples of famous mellotron sounds: the flute sound with "Strawberry Fields" (Beatles) and the strings sound with King Crimson. For the choir sound, he said he couldn't think of a good example (he could have mentioned 10CC's "I'm Not In Love") but his own song "Raider II"... This song is probably the most ambitious song he ever wrote. A musical kaleidoscope devoted to the American serial killer Dennis Lynn Rader (BTK for "Bind Torture Kill"). Some very low notes on the piano, horror noises played in quadriphony in the room: the atmosphere is dark as hell and you could hear a pin drop... Awesome. Then the song unfolded for 20 minutes in a succession of moods ranging from jazz, heavy metal, prog, doom and dark ambient, ending in a staggering noisy explosion.

In contrast, the last song of the set was the soft title song of the last album: "The Raven That Refused To Sing..". Wilson said in an interview that it's probably the most beautiful song he ever composed and I'm tempted to agree with him. During the song, the fantastic animated film by Jess Cope depicts the heart-breaking story of an old man who lost his little sister when they both were young. The atmosphere in the hall was simply magic and after the final piano notes, everyone jumped from their seat for a standing ovation that lasted more than 5 minutes.

During the encore, Wilson's band played the cover of the old Porcupine Tree song "Radioactive Toy". In the introduction, Wilson explained he feels he has the right to cover it as it dates from a period when Porcupine Tree was still a solo project.

In drawing conclusions after this fantastic concert (it was even more than a concert, it was an audio-visual journey), it is clear that the "Wilson King" has created a new style of music, a quintessential blend of 50 years of rock/prog/jazzy music. Even more, he managed to give this "old" musical style a very modern edge by integrating alternative (trip-)pop elements. Can't wait for his next album!

Wilson has just released a Blu-Ray/CD with one new song ("The Birthday Party"), an orchestral version of "The Raven...", the video's of "Drive Home" and "The Raven", both directed by the beautiful and talented Jess Cope and four live video's. Watch the trailer: