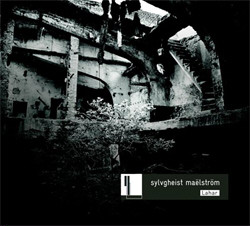 Sylvgheist maelstrom’s Lahar is an excellent release which has been in creation for more than 10 years. This debut album is an evocation of the 1980 Saint Helen volcanic eruption, this was repeated two years later. The project of Julien Sylvgheist aka Sylmalm, Sylvgheist Maelstrom creates lengthy electro-noise constructions from an array of synts and other electronic sources and samples. A lahar (English pronunciation: /ˈlɑːhɑr/) is a type of mudflow or debris flow composed of a slurry of pyroclastic material, rocky debris, and water. The material flows down from a volcano, typically along a river valley. The term is a shortened version of "berlahar" which originated in the Javanese language of Indonesia.*

However when you look at the track listing several other natural disasters have been used as sources of inspiration, most of these related to seismic activity. The CD starts with the opener 'Pompei' followed by 'Katrina', 'Lahar Mont Saint Helens', 'Lisbonne', 'Xynthia', 'Lothar', 'Eyjafjöll Chicxulub' and 'Kobe'. Even the 'Tougouska' disaster site is used for one of the titles on the CD, the later was probably a meteor but many say it was alien vessel crashing it’s way into our atmosphere. Oddly enough, this is also the most outlandish track, mind sweeping drum and base inspired vibes. Another track 'Lahar Mont Saint Helens' sounds like a muffled stream of sounds splashing their way through the listeners ear, an auditive 'Lahar' experience.Thus one could say this is a real disaster CD.

However despite the dreadfull titles, this CD is far from dreadful, it is one of the finest releases I have heard in years. Most of the time CD’s which take that long to make are either over the top or some are excellent, like this one. Despite the fact that the average length of a track is more than 7 minutes, it never bores. The easiest description on the level of a genre would be Electro/Power/Noise/Industrial. If you want to know which artists inspired or have in some way contributed to what it sounds like, I can only say listen to your Ant-Zen releases and related artists like Empusae, Tzolk’in , Flint Glass , Dither, le Diktat and much more. Lovely digipack, well illustrated with some information in the booklet.