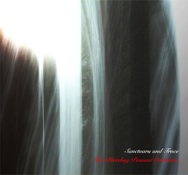 You can always blame the reviewer for making his essays far too short, but in this case I want to defend myself. The band is named The Bleeding Peasant Orchestra and according to the label they’re a group of anonymous individuals from obscure backgrounds. And no, there is no further information available, not even a tiny YouTube-clip so we can convince you that we’re dealing about some real quality.

But good, for those who are interested (and you better be) can always click on their Bandcamp-page as hearing them is loving them.

This debut features eight songs and in some way their music reminded me of the pagan sounds of early Virgin Prunes as they capture the same mystique and there’s even a voice similar to Gavin Friday. Some tracks (the epic Ignorance for instance) has echoes of the Middle East and then bands like C-Cat Trance or even Muslimgauze comes to mind.

The music you’ll hear doesn’t sound difficult at all, or you are blinded by its beauty or caught by the addictive rhythms. A tip for fans of ethereal music who love a bit industrial as well.