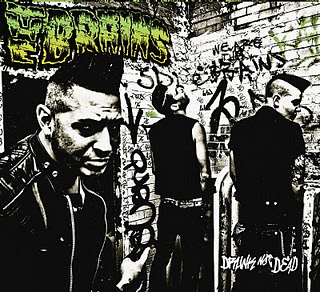 There's nothing around that we can predict, but if you force us to come up with something we'd swear that rock 'n roll will never go away. (or at least, let's hope so!)
For some it's a lifestyle, for others adrenalin and for some people it's their daily needed vitamins to struggle through a dull day, but whatever it might be: you'll have to hear The Brains!
You don't have to be that smart to note that a band whose front-man's name is Rene de la Muerte and whose album's called "Drunk not dead" are not taking themselves that seriously. This is what makes this album a hell of a party.
These Canadian rockmeisters are not the most original punks that walk upon this earth but their psychobilly slash horrorpunk (or whatever it is called) is meant to shake your hips... thirteen tracks long!!
Not one second left to get a grasp of breath as this is pure energy where in it feels like you've landed for 30 minutes in some crazy Roberto Rodriguez-movie, where the lunatic outsiders have taken over the power.
Combine Elvis with the speed of Motörhead and mix this with some good tequila and look: we gave you the recipe of a Brains-song.
Intelligent? No way!
Funny? Hell yeah!