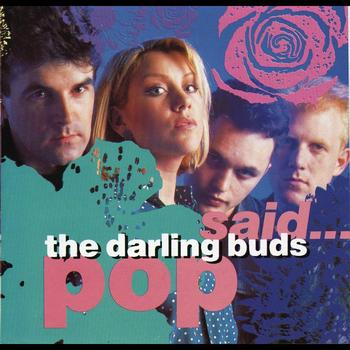 Of course it has something to do with my age, but I clearly remember those times when I bought my weekly Melody Maker. Apart from some nobodies, it were usually people like David Gedge from The Wedding Present who were gracing the cover. And then in the beginning of the 90's, there she was: Andrea Budd. A gorgeous blonde who was the frontwoman of a band named The Darling Buds. They did nothing knew, as all by all it was already done by bands like The Flatmates, The Primitives or even Transvision Vamp as this was nothing but bouncing indiepop with lovely female vocals.

Perhaps they were just lucky, as back in 1992 I easily could sum up 40 bands (or more) who sounded like them: The Popguns, Delicious Monster, The Hearthrobs to name a few, and of course hundreds of other bands I totally forgot. Yeah, we had a huge pile of indierecords back then and yet, "Pop said!" by The Darling Buds is one I kept playing, and I'm not saying this because of the looks of Andrea.

This mighty debut by this South Wales-indieband contained classics (well, at least it were classics in some rooms!) like  ‘Let’s Go Round There’, ‘Burst’, ‘Hit The Ground’ or ‘You’ve Got To Choose’. As this mighty gem is rather hard to find these days and because it's a good time to rediscover their music, Cherry Red has  reissued the album and expanded by nine tracks including all the B-sides.

An indie (re) must-have!