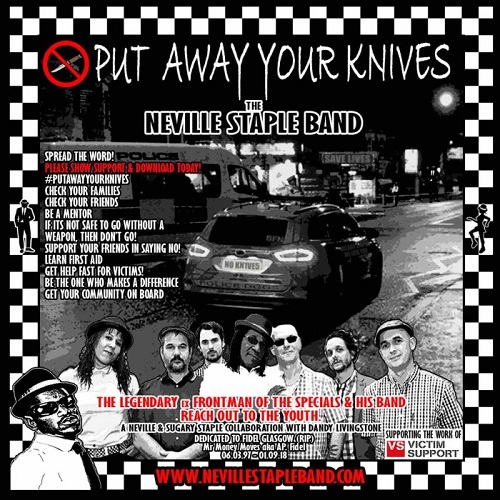 Put Away Your Knives (Aka: Take Heed)

This year sees the fortieth anniversary of Two-Tone Records and of course The Specials who are still riding high in the charts with Encore. But the influential figure of Neville Staples who once steered that band along with Fun Boy Three, is still very much active in music, creating songs with his own band and now he is on a very personal mission.

The current wave of knife crime in the United Kingdom has reached epidemic proportions.
In the midst of all this, Neville Staples has manifested and returned with a politically charged plea to disarm, directed straight into the ear of Britain’s youth culture.
This latest release, the single “Put Away Your Knives -Aka Take Heed”, proves the Original Rude Boy has not lost any of his incendiary delivery. A blend of punk, Ska and reggae is front and center from the start. The track is the original music of musician and producer Danny Livingstone and his original “Rudy, A Message To You”, though reworked and a hit for The Specials as “A Message To You, Rudy”. Indeed Livingstone joins Neville and Sugary Staple on the track, the same original message of The Specials is still relevant today in a politically uncertain climate.

However, all this goes beyond the spectrum of raising awareness and vital funds as it is something that has affected Neville Staples personally. In September 2018 Neville’s 21-year-old grandson Fidel Glasgow was fatally stabbed, so the emotional intensity of this has seeped into the track and it’s message.

Order The Track Via;
https://itunes.apple.com/us/album/put-away-your-knives-feat-sugary-staple-dandy-livingstone/1456682714
Direct to Victim Support Via;
www.victimsupport.org.uk/get-involved/donate