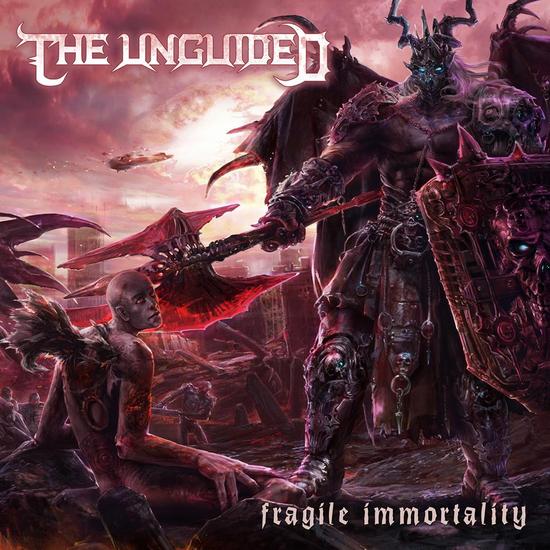 The nice thing with this one is that I first got the extras and only later on received the full album. So I’ll put the first review underneath this one...

The Unguided present their second full-length album, they play a style of metal fusing modern melodic death, metal core, and a heavy use of electronica strewn throughout. Three members of Sonic Syndicate broke away from the project and decided to form a band that melded the similar ideas of the members. Brothers Richard Sjunneson (harsh vocals) and Roger Sjunneson (rhythm guitars and keyboards) had separated from Sonic Syndicate at separate times, but ultimately joined up with Roland Johansson (clean vocals, lead guitar) to begin the process of forming The Unguided. Henric Liljesand (bass, Cipher System) joined some time later along with Richard Schill (drums), who had replaced John Bengtsson (Sonic Syndicate) who helped out for a short time.

So far this little informatic piece, as I felt it was needed...

One of the things I absolutely adore is the combination of modern melodic death metal and metal core, just to start with!

“Inception” starts the album off with energetic keyboards and simple metal core riffs. When Richard Sjunneson jumps in with his demonic harsh vocals it reminds me a bit of Johan Van Roy (Suicide Commando). The chorus comes in with the clean and melancholic vocals of Roland Johansson. It's a great angelic/demonic combo that has become quite popular in the previous decade the world of Metal. I absolutely love the groove, the drums and the great melodic sound. It's almost like an earworm when I re-listen to the song

. 'Defector DCXVI' has a nice solo in the middle of the song and one guitar sounds as if the 4 horsemen are coming in fast! Love the energy and the riffs! 'Granted' plays in the same style as the previous one, but with a more melancholic sound. 'Eye of the Thyla' has a more epic and ballad minded sound, but still fast enough to rock you! 'Unguided Entity' also received an electronic treatment, but this more guitar and grunt driven song is really great! More power metal comes with 'Carnal Genesis'! Heavy grunting and high tone screaming with a great riff and great drums! 'Enforce' starts slower, with more electronics, a piano before the guitars burst in and the melancholic sound gets a bit more worked out backed up by the harsh voice. 'Blodbad': the name says it all: harsh & heavy!


'Only Human' & 'Singularity' are great ones, real pearls! You have to listen to them and figure it out for yourself!
'Oblivion' is the last song of the regular stuff (see the link underneath, for the lucky bastards that got more)! This song is for sure of the kind to make you hit the repeat function and start all over!

I'm more than happy that I could review this one! Sometimes I feel like a little child that can go and play with the superheroes and in this case it is true: I'm a little child in his childhood heaven! See for yourself!