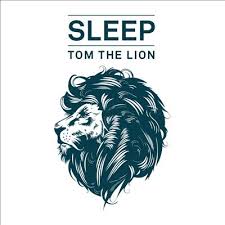 Remember when music sounded otherworldly without being confined to dullards in bedsits wanking away unwanted songwriting weight? Let's pipe up with Mark Hollis' Talk Talk, David Sylvian's Rain Tree Crow and solo work, that first James Blake album, Radiohead's In Rainbows and anything Billy Mackenzie drenched his vocals with. I'm not saying Tom The Lion hits those heights but he's not far off on much of Sleep. Recently acclaimed by the Rough Trade shops as their album of the month and the follow-up to his double 10" E.P.s (boxed as The Adventures Of Tom The Lion), Sleep is brimming with invention, intent and intensity and straddles the void between bedsit-pop and overblown stadium-rock that taints our scene today.

Warm, resonating, slightly left of centre songs that build into something worthwhile, rather than sputtering to an abrupt halt, there is much to commend on Sleep. Beholden, Motorcade and the title-track all show Tom's ability to weave a colourful tapestry of melodies that demand repeated listening, with much of the album strong enough to warrant a knowing nod and a press of the repeat button at least once or twice. Get your head around his unusual diction that could best be described as 'affected' and you'll be seeing out the old year and welcoming in a few more with this effort.