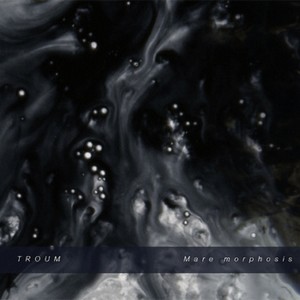 This is the third and final part in the “power romantic’ series (part I was “Mare Idiophonika“ and part II was “Grote Mandrenke“). It‘s a fine way to end the series. “Mare Morphosis” is a one track album and was recorded and assembled throughout the years 2009 - 2013. The first part is based on recordings made by the “Bach eingeschaltet Dritter Band”. What makes “Mare Morphosis” more than the typical drone, dark ambient album is the fact that this album is completed with instruments like drums, guitars, bass, accordeon, voice and mouth-organ. The result is sometimes mesmerising and dreamy but still threatening music. It’s like waves calmly crashing against the beach, but always feeling the threat that they will create a real danger when there’s a storm. Musically TROUM found a new dimension. At some points even reminding of a dark twisted version of Sigur Ros, especially when the drums and other instruments are kicking in. The first part of this CD is truly amazing. The mix of old classic tunes with dark ambient synths/ techs is absolutely stunning. The transition between the different moods during this song is absolutely brilliantly done. Listen for instance to the dark, heavy middle piece, the breathing (under water?) after that and the slowly built up from quiet music to heavy drums, voice and electronics. It’s all masterfully done. “Mare Morphosis” is maybe TROUM’s best work ever.