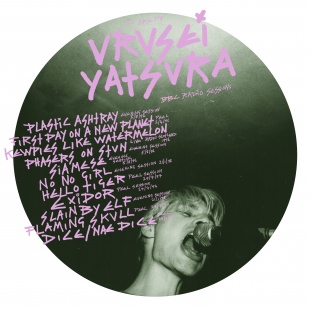 You Are My Usurei Yatsura:

Ear-bleeding recitals of singles such as Kewpies Like Watermelons, Slain By Elf and Plastic Ashtray are just a few of the highlights on this must-have document and despite not hitting the same commercial heights as some of their peers, UY garnered love and attention from the like of John Peel, Marc Radcliffe and a young Steve Lamacq. As well as finally capturing the imagination of the record-buying public with the Top 40 banger Hello Tiger and its attendant hit album Slain By, the band recorded FIVE Peel sessions from where much of these tracks have been culled.

Impulsive, compulsive, somewhat chaotic and yet stoned out and cathartic on the odd occasion, Urusei Yatsura put the 'go' in Glasgow during the mid to late '90s and left a trail of sweet aural destruction in their wake. It's been 15 years since the band originally folded - this sounds like it was made 15 minutes ago in just 15 minutes. And that's a compliment.