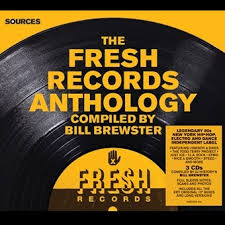 Part of the NYC Sleeping Bag empire, Fresh Records began as an offspring outlet for upcoming soul and rap artists with more material than its parent label could handle. Responsible for some classic electro cuts and hip-house monsters, Fresh had its finger firmly on the urban pulse from word go. Hardly comprehensive and not chronological, this triple-disc set is nonetheless as definitive as it gets. Disc one concentrates on the feet with tracks from Todd Terry, Chandra Simmons and the label's debut choon Tonight by Hanson & Davis, the second disc concentrates on the contrasting lyrical-kings T La Rock and Just Ice (many mixed by Mantronik) while the final set focuses on later recordings from EPMD, Stezo and Nice and Smooth. Misprinting the 12" of Back To Burn is a bit unforgivable but overall you get over 40 prime slammers such as Strictly Business (EPMD), Breaking Bells (T La Rock) and the under-rated To The Max (Stezo).