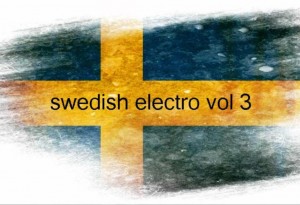 Swedish Electro Scene has released a 63 track compilation, a really extensive one. It presents Swedish electro bands and solo projects, and as the Swedish scene is a flourishing one, we were eager to hear the tracks on this compilation.

When listening further, at this point I conclude that I am really in a particular landscape of sounds that depicts the Swedish electro scene of today, that is so well presented both by Modular Passion with the track Frekvens and Patrik Pistol‘s What’s the Meaning, where we can hear the voice of Lisa Englund, which is such a nice refreshment after hearing only male vocals up to now. Lisa’s voice perfectly combines with the atmospheric synths, singing almost in a whispering manner, making you surrender to this release already by the sixth track.

A bit of a more up tempo track awaits you at the seventh place with another female voice. 2nd Happiest offers a bit of a dance sound with their Little Stars, which flirts a bit with the retro synth vibe. A more optimistic tune comes from Mechatronic, proving that not all is melancholic in Sweden, giving us a song to dance to with their Rewind. Dance beats continue but Cold Connection shifts the mood to a darker note on Memories, still holding that melodic course that runs from the beginning of the compilation.

As far as Presence | Of | Mind is concerned, the first thing that pops up to my mind is a clear Depeche Mode influence, which I can hear in vocals and song construction, and definitely stands out with heavier beats and a melody that is mainly formed by the vocals, which are the core of their Brittle Bones. To put Cold Blue Fire, performed by Denormal, is a perfect choice, since it continues in a bit minimalistic manner, with beats and vocals leading the story, and then developing into indeed a catchy but darkly painted chorus with a touch of industrial elements. Then back to electro pop with Red Cell‘s Taking Back The Crown that is one contemporary piece of electro sound, offering a mixture of feelings, varying between positive and melancholic feel, nice way to merge it into one track.

Hearts Of Black Science is a true revelation, as I was hearing them for the first time. They are clearly flirting with many influences, at least on Icon,which brings them close to the dark wave and gothic rock; this makes me want to investigate this band more for sure. There are some more 'goth' vibes on the next track, he solo project Walk With Anything, as you can’t escape the 'goth' vocals and overall feel of Gothic Princess. The Department brings us a minimalistic synth song Slow Down, again painted darkly and by the 15th track, I must admit the songs were very cleverly chosen and listed.

Dpoint presents the remix of This Is My Time, in which the dark beat is stressed with little melody. It sounds minimalist, albeit violent and dark at the same time. M-LINC brings the more industrial/ebm track The Piper, and in Afraid, Elke Machine combines ebm and synthpop. The ebm/industrial beat of Deadweight by Finkseye delivers what is needed to get your body moving, because the track has heavy beats and radiates power.

Sta Emot by SPARK! is for all the ebm lovers, as this is a track for waking up some old school ebm souls. Some more raw and powerful sound with a more martial rhythm can be found on The Iron Sky from Chaos All Stars. Besides a catchy chorus, it is really interesting how male and female vocals can work together on a track, and my attention is really drawn to the powerful female voice. And we are back to some very danceable and optimistic synh pop from eleKtroFish with Shaky, which is a nice change of feel on the compilation (after those darker and more ebm tracks), just in time not to make it monotone. Delaykliniken continues that synth pop feel with their Holy, but with a bit more melancholic version where we can hear even some trancy moments. And a wakeup call comes from Train to Spain with their electro pop tune Blipblop. The perfect sequence to this would indeed be a track from Vogon Poetry as their Hyperspace Bypass is again an optimistic and dancy electro pop tune. Another electro pop song Dark Side of The Earth from Love in Progress is the first instrumental track so far, but is a really nice refreshment and provides us with a bit of the retro vintage moment. Aeld sweeps you away with La Lux, not only with the great melodic synth sound but with a very versatile female vocal performance that varies from gentle to more daring, adding greatly to the song texture. Another female voice can be heard on the next track Fear of Truth from Libra, a bit of a darker electronic track with rather melancholic chorus. It seems there is now a nice sequence of female voices on the compilation, but the voice of Herself performs “Diseased” in more of an r n b style, and the song has even a trip hop feel to it, that makes this song stands out instantly. xxxxx

Anna Oberg, another female performer delivers an interesting track titled I Morgen, both vocally and musically, as she is a bit more experimental in her expression that is not easy to label, but I think we are hearing one exceptional artist here. I was afraid I wouldn’t hear enough of female voices on this compilation, I was totally wrong. KAOS! presents another strong female vocalist with their song Puppet Dance, a darkly painted electro track, and combination of languages makes it even more intriguing.

And finally a switch back to male vocals with Hem Igen from Hyacinthuset, a really mellow and dreamy pop song. Why Care from solo project named Camelot, reminds me again of Depeche Mode as far as vocals are concerned, but again is a nice melancholy and emotional track. Strand delivers a change of pace as it is a bit more of an up tempo track called In Your Head and Salvation provokes an association with Peter Heppner vocals, and even a bit of Wolfsheim sound, and is overall a danceable and catchy song. True Love is yet another synth pop tack from Petition For Mercy that gives a bit of a retro 80s and even italo disco feel but The Livelong June provide their own electro statement on That’s Why I Love Weekends. Some real synth pop can be heard again on Do You Want to Dance from Electric City Cowboys, a danceable tune as a modern halfbreed of OMD and Erasure. Obsession of Time offers truly powerful female and male voices, as I am (sorry guys) a fan of solid female voices, again I must pay a compliment to the female vocals, but both female and male vocals work together just perfectly on this vibrant track Obsession.

Frontadero shows us that synth music doesn’t always need to be rigid or serious as he is experimenting with electronica and some techno elements that I especially like, giving it a trancy feel, on the third instrumental called Sebababa. This track I would name as another highlight of the compilation for me. Zyntetix is creating the robotic minimal electro sound on Analogue Man and even there is a voice present I would consider it to be more of an instrumental track. Another minimal electro track Damage comes from Asfalt. The track is an excellent mixture of minimal electro-ebm-experimental style. Viral Stealth for some reason gave me some goose bumps while listening to their Flesh In Command, which is again a minimalistic electronic-ebm experience but I consider this track to be the darkest point of the compilation despite this.

But what’s to come is even more minimalistic, as I will stop right there at that description, minimal electro, and as a title suggests Not Human, I can hardly imagine this voice coming from the human being, but Musik For Lik made their point. It is surely not for everyone, but I guess for the likes of me. By the time I got to My Own Sorrow I really didn’t know what to expect from the last two tracks, but Rats In The Walls makes you feel just like that, like a rat in the wall, a powerful dark electro-industrial experimental track filled with feels of anguish and claustrophobia, so whoever dares to listen, get ready. Last Cermonia as the last track, closes the compilation in a very dancy manner, EoV saw to it that you don’t get to sleep after this 63 tracks voyage and that it ends on an uplifting tone.

To my personal feelings, I consider this compilation cleverly put together as it presents various projects, names and bands that you might never have heard of before but are definitely worth checking out. This proves once again that Sweden has a lot to offer musically and that the Swedish electro scene is indeed a great and diverse one.