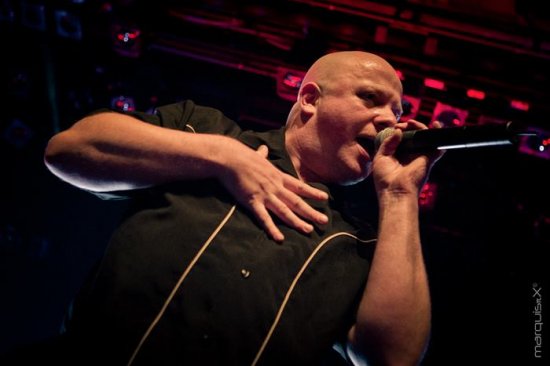 Concert at Botanique in Brussels on 26th January 2012

"This was no concert; it was better: it was a party with friends!" This remark made by Ronan Harris at the end of the concert summarizes perfectly the feeling of this incredible evening. A lot of fans had come from all corners of Belgium and even from abroad to witness the kick-off concert of the second leg of VNV Nation's Automatic tour. The venue of the concert was the "Orangerie", the largest concert room of the "Botanique" complex, the impressive cultural center located in Brussels' botanic garden. The room was packed for what was likely to be one of the best concerts of the year in Brussels, at least in our scene.

The German band Destroid started the program with a short but powerful show. Destroid is a project of Daniel Myer, who is also the leader of Haujobb and Architect and one of the new pillars of Covenant. The music of Destroid is mainly EBM and synthpop oriented, less experimental and more accessible than in Haujobb or Architect. On stage, the band played tracks from their 3 CD's/EP's: Future Prophecies (2004), Loudspeaker (2007) and Silent World (2010). Daniel Myer is a good showman and gives a lot of energy during his performances. The music and the sound were very good. As a whole, the audience reacted well but it was clear that everybody was waiting for the next act.

And what an act! Since its creation in 1990, this English/Irish band has combined elements of synthpop, EBM and trance into a whole new musical genre: Futurepop. The "VNV" in the name stands for "Victory not Vengeance". Released last year, "Automatic" is already their 8th full-length CD and I was eager to find out how the new tracks would be fitting in the band's live setlist. I was also eager to see how a band that's usually headlining the biggest darkwave festivals would perform in a new show of its own, especially here in Brussels, where they never played before.

After the "On Air" intro, the band took the stage. The founding members Ronan Harris (vocals) and Mark Jackson (drums) were accompanied by two keyboard players, Tom Lesczenski and André Winter. Immediately, Ronan started interacting with the audience, saying "Hello, ladies and gentlemen" both in French and Dutch, much to the delight of the crowd. The track "Chrome" was the perfect kick-off song. Ronan walked all across the stage, engaging the audience to participate and to have fun. Behind the musicians were 5 vertical LED screens projecting abstract frames and letters in function of the music.

"Space And Time" was the first track from "Automatic" to be played and it worked perfectly. People in the public were already shouting and dancing like crazy. The band went on with two other club songs until it was time for "Illusion", a slow and beautiful song dedicated to Sophie Lancaster, the girl who was murdered in a park in England in 2007 simply because "she was gothic". The feeling during this song was magical, very touching, with the audience singing along: "Please don't go.. I want you to stay..."

After this, the band pushed on the accelerator and played a series of dancefloor hits, like "Standing", "Honour 2003" and "Legion". Ronan really held the audience in the palm of his hands and, as he usually does, he engaged people not to take pictures or shoot films for Youtube but to focus on the show and have a good time. The atmosphere reached its climax. on the last two songs of the set, both from Automatic. In the chorus of "Resolution", Ronan made sure that everyone was applying the lyrics of the chorus: "Raise your hand up high...". Finally, in "Control", the electro/techno progressions made the audience literally scream and the show ended on an extremely powerful note.

In the encore, the band played three songs, "Beloved", "Nova" and "Perpetual" and the interaction between the band and the public became really incredible. Ronan asked to "shine a light on the audience so that he could see the faces". He made fun of "these Belgians who are so happy because they finally have a government after all this time" (laughs)... During "Perpetual", Ronan managed to have the audience sing the keyboard riff during the song but also long after the song was finished, giving the rhythm only by tapping his microphone with a finger. Before leaving the stage he announced that VNV would be playing at the SHADOWPLAY festival in July, which provoked a cheer in the audience and he concluded: "This was no concert; it was better: it was a party with friends!"

In a nutshell, it was a indeed great show, a bit like a religious celebration with Ronan as the high priest. Both the sound and the light show were perfect and the audience's reaction was simply stunning. Again, Ronan Harris proved to be one of the best performers in our scene, deeply human and really caring for his fans. A big thank you to the teams of Bodybeats and FantastiqueNights, who jointly organised this event.