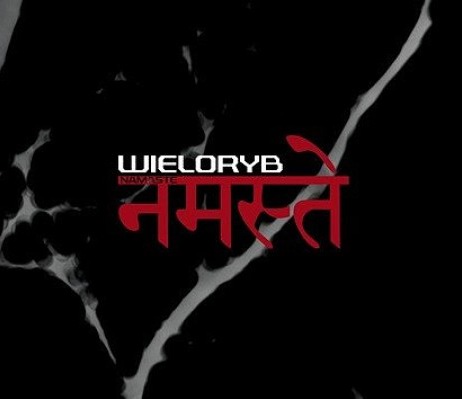 I was rather enthousiastic about "Empty", the 2011 debut of this Polish band. Myroslaw Matyasik en Pawel Kmiecik are the driving force behind this band and now they unleash their new album "Namaste". That means I bow for you and you'll surely bow your head too if you hear their industrial stompers on the dancefloor.

As before, you get a good mix of rhythmic beats filled with noise, added with lots of ethnic vocals that really add something original and fresh. There's a whole range of ethnic singing involved, taking you all over the great country that India is. I LOVE the ethnic singing in "Goa" and after that there are even some mutilated guitar riffs, combined with more ethnic singing and ambient. Yes a strange combination but the song flows smoothly between those moods in "'Haryana".

Deep religious chants, pounding beats (Moga)... what more do you want? Sludging rhythmic industrial maybe? There also enough of that with "Punjab" and "Ramu-Ki". Fancy a "Walk In The Himalayas" along an ancient pilgrim route? No need for instruments, pots and pans are more then enough to reach a religious experience.

Next reviews
GUIDO BELCANTO • Zo Goed Als Alleen
SONIC AREA • Music For Ghosts
SAVAGES • Review of the concert at the Botanique in Brussels on May 13th 2013
GEISTFORM • Data Transmission
CHELSEA WOLFE • Review of the concert at the Trix in Antwerp on May 6th, 2013
THE DEVIL & THE UNIVERSE • Evoking eternity ep
FRIENDS OF ALICE IVY • We Are As Ghosts
EX_TENSION • Le Seuil De Tolérance
• Review of the REWIND Festival in Ghent (DAY TWO) with VNV Nation, Diary of Dreams, Vomito Negro,.. (Ghent, 13 April 2013)
RADICAL G • Wasp EP