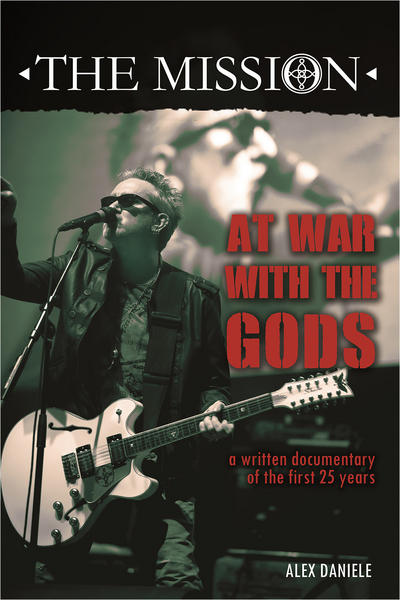 A book about The Mission

The Mission - At War With The Gods (book)

a written documentary of the first 25 years

AT WAR WITH THE GODS tells the story of the first 25 years of The Mission, from the speed-fuelled beginnings in Leeds to the tour which in 2011 saw the band reform and tread the boards of some of the most important venues in the world once again.

During the 1980s, in a music landscape that was learning to build new trends from the rubble left by the punk storm, The United Kingdom confirmed its role as an inexhaustible source of artists of every kind. In the north of the country, far away from the din of a metropolis turned into a Mecca for millions of visiting rock music lovers, new ways of interpreting new-wave and post-punk developed, and bands were formed which would thoroughly embody them. Here, between Bristol, Liverpool and Leeds, began the musical mission of guitarist and singer Wayne Hussey; a story painted in the romantic hues of gothic rock and which crossed paths with the exploits of Led Zeppelin, U2, The Cure e The Cult, rich with prestigious achievements as well as tumultuous chapters.

Alex Daniele, lifelong Mission fan and fairly well-known promoter, DJ and independent music critic in Italy, devoted several years to completing ‘At War With The Gods’, exchanging numerous emails with Wayne Hussey and all the other musicians who over the last quarter of a century have been part of the band, as well as producers, managers, roadies, various “missionaries” scattered across the world, and other fans – from Craig Adams to Simon Hinkler, from Mark Gemini Thwaite to producer Tim Palmer, from Miles Hunt to Billy Duffy, from Julianne Regan to Mike Kelly…

Along with the history of the band and a detailed breakdown of the individual careers of its members, as in a documentary, the book includes first-hand accounts from its protagonists and a fascinating set of photographs taken from Wayne Hussey’s private collection and the author’s own archives.