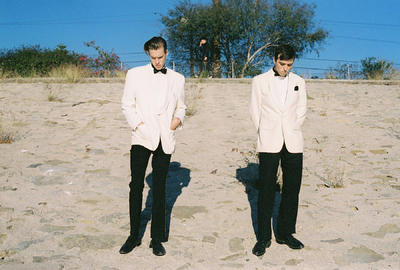 Sacred Bones Records is proud to present International, The third full length LP from Copenhagen's Lust For Youth. To put it bluntly, International is unrecognizable as a Lust For Youth record on first listen. Hannes Norrvide’s previous solo albums under the Lust for Youth moniker have been described as “dark, cold, atonal, tormented, lonely, and lower than lo-fi.” The approach on International has shifted dramati- cally. Writing as a three-piece now, with longtime live collaborator Loke Rahbek and new band member Malthe Fisher, who produces and plays guitar, LFY have entered a completely new territory. The result is stunning. International is a buoyant synth masterpiece in the vein of early Depeche Mode, Pet Shop Boys and New Order. Norrvide’s work has always had pop sensibilities buried deep in the reverb, but the hooks are front and center on International, and there is nothing lo-fi about it.

That is not to say the record is without substance. There are still some deeply introspective moments as well, notably the instrumental passages “Ultras” and “Basorexia,” which evoke the morning-after loneliness that a lot of earlier Lust For Youth work has explored. According to Rahbek, “the record sort of happened by chance. Hannes and I had talked about recording some stuff together for the fun of it, and Malthe offered to help us record. Initially, we were just going to do a song or two, but within a few weeks it was obvious that it was a combination that worked. The period was strange, terrible things happened in everyone’s life outside of the studio, so as a result many hours were spent in the studio, like a safe zone.”

“As the title indicates,” Rahbek adds, “the record deals with the rootless, sometimes almost inhuman, nature of traveling and touring. Hotel rooms and strangers’ beds, drugs and clubs, and the impossibility of living a regular life.” It may be an irregular life, but nothing could suit them better. International is Norrvide’s magnum opus, and with Fisher’s production and Rahbek’s co-writing skills, the potential this band has always shown has been fully realized. The album features additional production by Elias Bender Rønnenfelt of Iceage as well asAdrian Toubro of Lower

The deluxe edition of International, exclusively available through Sacred Bones mail order will ship with a bonus cassette featuring remixes by Silent Servant, Total Control, Helm, Chelsea Wolfe, Cult of Youth, Marshstepper & more. This bonus remix EP will also be available as a deluxe edition of the album available from digital retailers.

Album art, track listing, tour dates are below as well as a stream of "Epoetin Alfa", the first engrossing taste ofInternational.

The track showcases the growth that Lust For Youth has experienced over the last year, you can hear it in the production, you can hear it in Norrivide's voice, you can hear it everywhere. It's the opening track on the record and is a great example of the shape of LFY to come. This track also features beautiful guitar work by Elias Bender Rønnenfelt of Iceage.