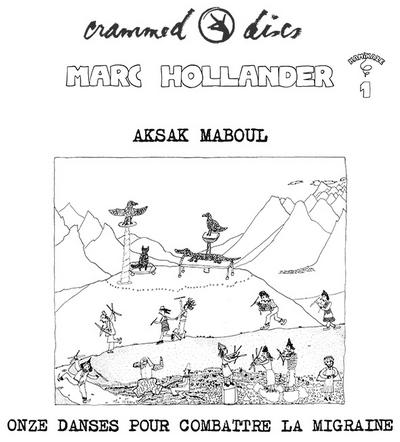 Here's at last the vinyl reissue of the seminal album, recorded in 1977 by Crammed founder Marc Hollander with Vincent Kenis (a.o. producer of the Congotronics series), and originally released on Marc Moulin's ephemeral Kamikaze label. The reissue is already creating quite a stir (the initial pressing sold out immediately, a couple of weeks ago, and the LP will again be available in a few days).

In the spring of 1977, two young Belgian musicians who call themselves Aksak Maboul (Hollander & Kenis) set out to record an album in which they playfully fused and deconstructed all kinds of genres to create their own musical world. Three years later, Hollander founded the Crammed label.

"Onze Danses…" became a cult album, and can retrospectively be viewed as a manifesto for the Crammed aesthetics, a blueprint for some of the directions which the label went on to follow during the next few decades.

Audience interest in the music of Aksak Maboul has been constant over the years, and has significantly increased since last year's release of the band's "lost" avant-pop opus, Ex-Futur Album, which was enthusiastically welcomed, and led Marc Hollander and (Honeymoon Killers singer) Véronique Vincent to form a new band and play shows for the first time since the 80s.

Onze danses pour combattre la migraine is reissued with its original 1977 artwork. It contains a double insert with texts and pictures, as well as a digital download code for the album plus three bonus tracks.