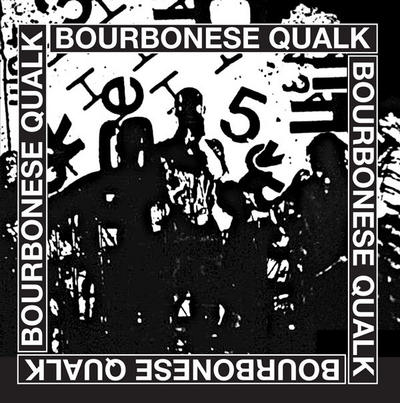 Mannequin Records is proud to present a compilation of one of the most important Industrial bands active during the 80’s in the UK.

Bourbonese Qualk were an experimental music group from England who where active from 1979 until 2003. Throughout this period they had a number of different line-ups but this album concentrates on the period from 1983 until 1987 with the trio of Simon Crab, Julian Gilbert and Steven Tanza. During this time the group released five albums: ‘Laughing Afternoon’, ‘Hope’, ‘The Spike’, ‘Preparing For Power’ and the self-titled ‘Bourbonese Qualk’ on their own Recloose Organisation and New International Records labels.

The group were always obsessively and uncompromisingly focussed on controlling their work – they ran their own record label, recording studio, tour organisation and music venue (the notorious ‘Ambulance Station’) – they refused to integrate into the commercial music racket turning down publishing deals from major labels – stubbornly opting for total independence.

The group are known for their political activism which was formed in the crucible of the 1980s Britain: The Miner’s Strike, Falklands/Malvinas war, Anti-fascism, Thatcherism, Moneterism, squatting/housing, local government corruption, anti-capitalism, and Anarchism – which was further re-enforced by touring Europe and meeting like-minded groups and organisations.

Bourbonese Qualk saw their music as a revolutionary cultural force – a belief that radical musical forms must be part of positive social change. Despite this position, the group avoided dogma, cliché and propaganda, preferring to let their audience come to their own conclusions – their work was often ambiguous and directly critical of cynical power-politics of any color – often irritating members of the traditional ‘organised left’.

In 1984 Bourbonese Qualk occupied a large empty building on the Old Kent Road in South London which they turned into a base for their activities and a co-operative for artists, musicians and writers as well as a centre for radical political activism – specifically as a co-ordinating centre for the ‘Stop The City’ anti-capitalist riots of 1984-1986. Most of the recordings on this album were recorded in their studio at the Ambulance Station.

The group never record in a ‘proper’ studio (not that they could ever afford to), choosing instead to work with their own extremely basic equipment (at a time when home studios were very unusual – the unique raw sound of these recordings is the result of their choice – which now, ironically, is in vodue due perhaps to the overwhelming obliquity of ‘clean’ audio digital production tools.

If Bourbonese Qualk have a legacy, it is that ‘culture’ should be reclaimed, re-defined and owned by the people, wherever they are, however small and not by the state or the market and that ‘culture’ is a vital vehicle for debate and radical change.

B1 Return to Order

C1 God With Us

C5 To Hell With The Consequences

D7 This Is The Enemy

03 To Hell With The Consequences

21 This Is The Enemy