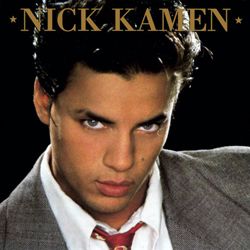 This 2 CD - 25 track Deluxe Edition features Nick Kamen's debut album plus 15 related remixes and rarities as bonus tracks dating from its original release back in 1987.

This is the definitive collection available of Nick Kamen's eponymous debut album.

Nick Kamen first came to the public’s attention as a model, and is probably best remembered for his role in the

infamous Levi’s advert, where he walks into a launderette and takes off his jeans. However, it was music that was

charting in the UK, US and across Europe.

CD 2 includes many 12" versions, remixes and B sides

All the bonus material appears on CD for the first time in the UK.

This collection includes various versions of the four singles taken from the 'Nick Kamen' album.

music charts. The single was written and produced by Madonna and Stephen Bray - the writer / producer team

behind Madonna's "Like A Prayer” album. Madonna also unmistakably provides backing vocals on the track. This

Loving You Is Sweeter Than Ever - the 2nd single from the album was a cover of the old Four Tops classic, co-written

by Stevie Wonder & Ivy Jo Hunter. It reached #16 in the UK charts. Three versions are included across this 2 CD

‘Nobody Else’ - didn't replicate the success of the first two singles. There are five versions featured including

The album in large part was produced by Stewart Levine, the man responsible for many hit records over the years

including Simply Red, Curiosity Killed The Cat and Lionel Ritchie amongst many others.

There are contributions from remix giants - Arthur Baker, Jellybean and Shep Pettibone

All the tracks have been sourced from the original production master-tapes.

2. OPEN THE DOOR TO YOUR HEART

5. COME SOFTLY TO ME

6. LOVING YOU IS SWEETER THAN EVER

7. EACH TIME YOU BREAK MY HEART

14. NOBODY ELSE - ARTHUR BAKER DANCE

2. LOVING YOU IS SWEETER THAN EVER -

3. NOBODY ELSE - SPECIAL ARTHUR BAKER

9. LOVING YOU IS SWEETER THAN EVER -

*DENOTES RELEASED ON CD IN THE UK FOR THE FIRST TIME