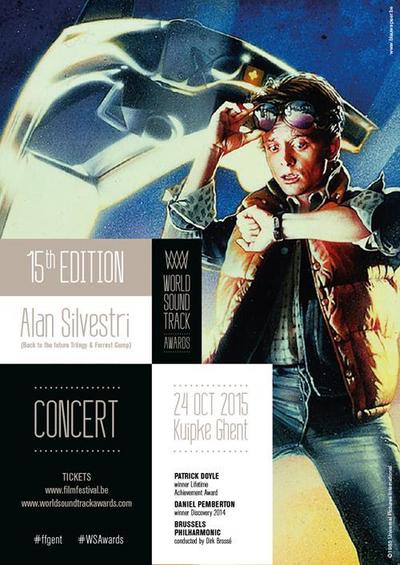 The World Soundtrack Academy aims at supporting film music, sound design, composers and their worldwide promotion. In fifteen years time, the membership of the WSAcademy grew into a group of 370 international film (music) professionals deciding on the nominees for the annual World Soundtrack Awards through several rounds of voting. Besides these first nominees, the Academy will also select five nominees for the Discovery of the Year 2015 by the end of August. Finally the public can also nominate their favorite score by voting for the Public Choice Award on the website until 5 September 2015.

The nominees for Film Composer, Original Film Score and Original Song of the Year are:

Alexandre Desplat ‘Unbroken’, ‘The Imitation Game’, ‘Everything Will Be Fine’, ‘Tale of Tales’

Michael Giacchino ‘Dawn of the Planet of the Apes’, ‘Inside Out’, ‘Jupiter Ascending’, ‘Jurassic World’, ‘Tomorrowland’

Johann Johannsson ‘The Theory of Everything’, ‘The 11th Hour’, ‘Sicario’

Best Original Film Score Of The Year
‘Birdman: Or (The Unexpected Virtue of Ignorance)’ by Antonio Sanchez

‘The Imitation Game’ by Alexandre Desplat

‘The Theory of Everything’ by Johann Johannsson

Best Original Song Written For A Film
The Apology Song from ‘The Book of Life’
Music by Gustavo Santaolalla, lyrics by Paul Williams, performed by Diego Luna

Grateful from ‘Beyond the Lights’
Music & lyrics by Diane Warren, performed by Rita Ora

The World Soundtrack Awards will celebrate its 15th anniversary with one of the most brilliant film composers of his generation, Alan Silvestri, known for his scores of 'Back to the Future', 'Who Framed Roger Rabbit' and 'Forrest Gump'. Film Fest Gent will also be recording and releasing an album with the scores of Silvestri. The recording will take place on 19 – 20 – 21 August at Flagey Studios in Brussels, recorded by Galaxy Studios and conducted by Music Director of Film Fest Gent Dirk Brossé and performed by Brussels Philharmonic & Flemish Radio Choir.

Following Film Fest Gent’s focus on British cinema this year, the Lifetime Achievement Award will be presented to composer Patrick Doyle at the World Soundtrack Awards. In addition to Doyle’s oeuvre and in line with tradition, Discovery 2014 Daniel Pemberton will also be performing that evening.

The 15th World Soundtrack Awards & Concert will take place on 24 October 2015 at Kuipke in Ghent. All info & tickets: can be found on worldsoundtrackawards.com. You can listen to the WSAwards playlist and much more on the Spotify account van Film Fest Gent.