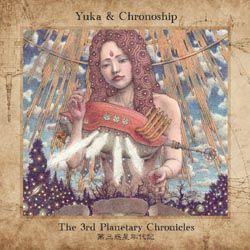 The 3rd Planetary Chronicles - Yuka & Chronoship out on Cherry Red

Yuka & Chronoship was formed in 2009 by Yuka Funakoshi (one of the most distinguished female prog-rock artists in the world) and three experienced session musicians (Shun Taguchi, Takashi Miyazawa, and Ikko Tanaka). Via MUSEA (France), the band have released two albums in 31 countries.

The setting of the band’s third album is the Earth or the third planet from the Sun. "The Third Planetary Chronicles” is a grandiose concept album themed with scientific/technological revolutions in the human history: stone-age, Copernican theory, industrial revolution, and theory of relativity.

"Water Reincarnation”, the band’s first album released in 2011, is centred around the theme of perpetual and cyclic transmigration of water.

Their second album in 2013, "Dino Rocket Oxygen”, is comprised of three suites, and the album cover was designed by Roger Dean.

1. BIRTH OF THE EARTH - COLLISION

5. BIRTH OF THE EARTH - MERGER

9. BIRTH OF THE EARTH - MAGMA OCEAN

12. BIRTH OF THE EARTH - EMBRYONIC PLANET