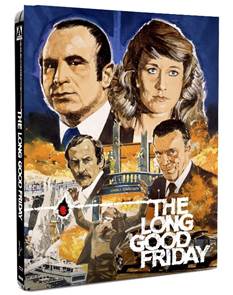 Arrow Video is thrilled to announce the definitive release of The Long Good Friday, John Mackenzie’s iconic thriller which is often cited as the best British gangster film of all time. This newly restored version will be available on dual format Blu-ray & DVD as a Steelbook from 4th May 2015 and also as part of an exclusive limited-edition 3,000 run box set which will include 1986’s Mona Lisa alongside a 100-page hard-back book and an exclusive bonus disc featuring the Blu-ray premiere of John Mackenzie’s notorious farm safety film Apaches.

This brand-new restoration, which was scanned from the original camera negative, with framing and colour grading supervised by the original cinematographer Phil Méheux, will feature a host of extras, combining the previously-released John Mackenzie commentary and making-of documentary Bloody Business with several brand new interviews.

Arriving on Blu-ray and DVD in a choice of two editions: either the Steelbook of The Long Good Friday on its own, or as part of a bigger box-set which includes Mona Lisa and an exclusive bonus disc featuring John Mackenzie's notorious farm safety film Apaches (Blu-ray premiere) with an archive Q&A with him and Bob Hoskins and extended interviews.

The upcoming Arrow Video restoration of The Long Good Friday and Mona Lisa is a fitting tribute to Bob Hoskins, a year after his sadly premature death, being that it features two of his greatest performances.

Harold Shand (Bob Hoskins) is a businessman with great ambitions. Spotting the development potential of London’s derelict Docklands area years before the Thatcher government, he tries to broker a deal with his American counterpart (Eddie Constantine) that will make them both millions. But who is killing Harold’s other associates and blowing up his businesses – and why?

Universally regarded as one of the greatest British gangster films ever made, The Long Good Friday rocketed Hoskins to international stardom. He’s given sterling support from Helen Mirren (as his upper-crust mistress), Paul Freeman (Raiders of the Lost Ark) and Derek Thompson (Casualty), and there’s even an early appearance from future James Bond Pierce Brosnan.

This special limited edition also includes Mona Lisa, Hoskins’ return to the gangster genre – although the kingpin here is played by a mesmerisingly slimy Michael Caine, with Hoskins merely George the chauffeur, transporting high-class prostitute (Cathy Tyson) from client to client. But when she enlists his help in tracking down an old friend, George finds himself exploring a hellish underworld that he never imagined existed.

Optional English subtitles for the deaf and hard of hearing