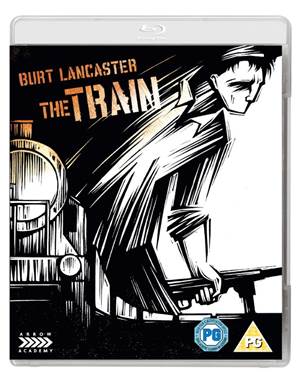 Following the success of Brute Force, The Killers and Sweet Smell of Success, Arrow Academy is delighted to announce their latest Burt Lancaster title, John Frankenheimer’s classic war picture, The Train. Often hailed as the film which set the template for Die Hard and that particular brand of action movie, The Train will arrive on Blu-ray from 11th May 2015.

The high definition presentation of the film will be accompanied by an audio commentary with John Frankenheimer, an isolated score option and a newly-filmed interview with Burt Lancaster’s biographer, Kate Buford, tracing the actor’s career throughout the decade.

Also present are a French television news report on the making of The Train, containing interviews with the locals of Acquigny who assisted in its production, an archive interview with actor Michel Simon, footage from the film’s gala screening in Marseilles and the theatrical trailer.

The Blu-ray will also come with new artwork by Vladimir Zimakov and a collector’s booklet with new writing on the film by Sheldon Hall, illustrated with archive stills and posters.

Directed by John Frankenheimer at the peak of his powers, The Train was made during a tremendous run of top-class pictures that also included Birdman of Alcatraz, Seven Days in May and The Manchurian Candidate, withSeconds soon to follow.

France, 1944. Art lover and fanatical Nazi Colonel Von Waldheim has plundered a Paris museum for its masterpieces, including works by Van Gogh, Picasso and Cezanne. His intention is to have them transported by rail to Berlin, but one man stands in his way. Aware that the Allied forces are fast approaching the French capital, Resistance fighter Labiche need only stall the train for a few more days, but he’ll have to use all of his wits and skills to do so.

Featuring two Oscar-winners in its lead roles – Burt Lancaster as Labiche and Paul Scofield as Von Waldheim – and Jeanne Moreau and Michel Simon in support, The Train combines star power with spectacular action sequences to produce a classic war movie.

· Burt Lancaster in the Sixties – a newly-filmed interview with Lancaster’s biographer Kate Buford, tracing the actor’s career throughout the decade

· French television news report on the making of The Train, containing interviews with the locals of Acquigny

· Footage of The Train’s gala screening in Marseilles