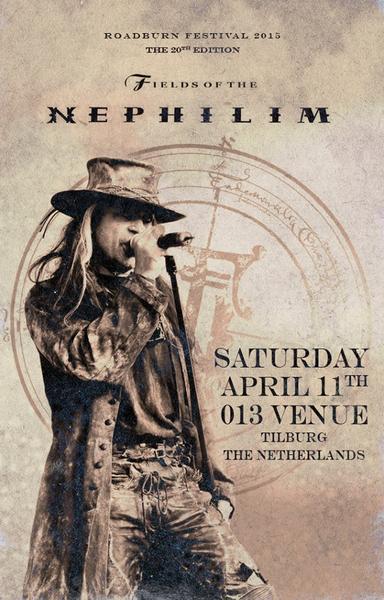 FIELDS OF THE NEPHILIM at ROADBURN festival

First festival headline announcement of 2015 for Fields Of The Nephilim plus an exclusive special guest appearance. Full statement from promoter below:

We are honored to announce that British gothic rock innovators Fields Of The Nephilim will be gracing the stage twice at the 20th edition of the Roadburn Festival at the 013 venue in Tilburg, The Netherlands. In addition to serving as the Saturday headliner on April 11, 2015, the band will perform a different set as special guests at ‘Houses Of The Holistic’ on Friday, the special Roadburn event curated by Ivar Bjørnson (Enslaved) and Wardruna's Einar "Kvitrafn" Selvik, which will be held on Friday, April 10.
Currently 30 years into a groundbreaking career, Fields of the Nephilim have had a major impact on an entire generation of musicians and music fans. Led by singer Carl McCoy, the Stevenage, England band fused the darker elements of post-punk with more overtly American sounds such as blues and outlaw country, creating a sound that was gritty, grandiose, and menacing, unlike anything that was made before or since. Such classic albums as Dawnrazor, The Nephilim, and Elizium helped shape the goth subculture, but at the same time played a profound role in influencing a wide array of today’s music, ranging from indie, to occult rock, to metal. Such contemporary bands as Watain, Katatonia, Horseback, and Enslaved cite the Nephilim as a major influence.

"Fields of the Nephilim has accepted our invitation for our "Houses of the Holistic" at Roadburn 2015. Bleep! Anything I say after that sentence is going to seem insignificant in comparison, so no pressure for once,” says Bjørnson, "I've been a avid fan of Carl McCoy and Fields of the Nephilim since I was introduced to them during the early years of Enslaved; and they have remained a constant source of inspiration ever since (check out the song ‘Nordlys’ from our Scion-EP ‘The Sleeping Gods’, for instance). Having these absolute masters of sublime Music from the Shadows as very special guests at our curated event is as big as it gets; April 2015 just can't come fast enough! Aaaaaarrrrggghhh!"

Comments Selvik: "The basic idea of our ‘Houses of the Holistic’ is of course about inviting bands we find interesting and would love to see perform but it is also about creating an event that at the same time says something about what shaped and inspired us on our own creative path - AND - since the authors of the poetic Edda are long since gone I personally have difficulty thinking of a more fitting band than Fields of the Nephilim to give voice to that idea."

We at Roadburn have been huge supporters of Fields Of The Nephilim since the Dawnrazor album in 1987, and with their influence looming large over so many acts that have played at our festival over the years, hosting these two special performances at Roadburn 2015 couldn’t be more appropriate.

Roadburn Festival 2015 (including The Heads as Artist In Residence, Wardruna and Enslaved among others) will run for four days from Thursday, April 9 to Sunday, April 12 at the 013 venue in Tilburg, The Netherlands.