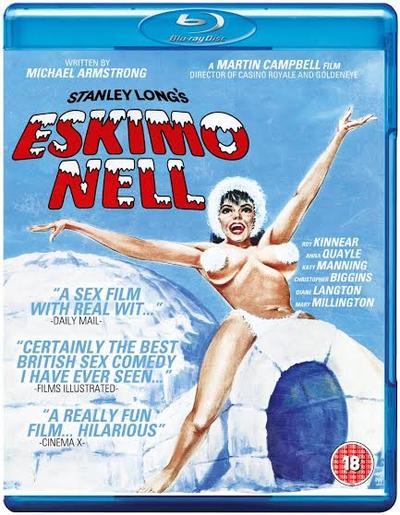 A quadrilogy of cult classics on 88 Films

THE MONTH OF VALENTINE’S LOVE JUST GOT EVEN HOTTER!

88 FILMS BRINGS YOU A QUADRILOGY OF CULT CLASSICS!

FROM A FLESH-FLAUNTING FAVOURITE TO THREE FEAR-PACKED POT BOILERS, FEBRUARY IS AN EXCITING MONTH AT 88 FILMS!

Now in our third year, 88 Films is looking towards 2015 with the hopes of bringing our fans yet more in the way of under-looked genre gems, certified masterworks of marginal cinema and an array of slice and dice standouts with our Slasher Classics sub-label. This month, 88 Films drives their proverbial movie machine into top gear with four famous popcorn flicks that we believe few fans of cult craziness will want to avoid!

First up is ESKIMO NELL - one of the most celebrated British sex comedies of the 1970s. Featuring a witty script from MARK OF THE DEVIL’s Michael Armstrong (who also stars) and directed by a young Martin Campbell - years before he helmed the James Bond gems GOLDENEYE and CASINO ROYALE – ESKIMO NELL is a hilarious satire on the low-budget British skin-flick industry of the time. The story focuses on three inexperienced filmmakers (Armstrong, Christopher Timothy and Terence Edmond) who attempt to make a movie version of the notoriously rude poem ‘The Ballad of Eskimo Nell’, with disastrous results. This classic British rib tickler features a cast of famous faces including Roy Kinnear (THE THREE MUSKETEERS), Katy Manning (DOCTOR WHO), Christopher Biggins (THE ROCKY HORROR PICTURE SHOW), Diane Langton (CARRY ON ENGLAND) and a cameo from the decade’s premiere sex kitten Mary Millington in her début movie appearance. Digitally re-mastered from the original film elements, and with a host of special features, ESKIMO NELL makes its way onto British BluRay for the very first time.

Next up is the continuation of our Slasher Classics line with three timeless terror totems.

Leading the lacerations is one of the most notorious and controversial horror shockers of all time: 1980’s matriarchal masterpiece MOTHER’S DAY. In this frequently censored frightener, we are introduced to three twenty-something women who are about to embark on a camping trip to hell. Our helpless heroines are stalked and snatched by a pair of psychosexual brothers and their insane parent - but oestrogen proves tough to overcome and MOTHER’S DAY ultimately provides us with a chair-gripping, sanguine- stained battle of the sexes. Prepare to be disoriented and disturbed by one of the true greats of eighties independent terror! Considered to be an essential entry in the backwoods-slasher genre, MOTHER’S DAY debuted in 1980 to critical confusion - but gained a fan following that includes such Hollywood heavyweights as Eli Roth (HOSTEL) and Brett Ratner (RUSH HOUR). Indeed, Ratner would eventually produce a lavishly budgeted 2010 remake, starring Rebecca De Mornay, although - as in most cases - it is the original which is most potent and powerful! Thirty-five years after its premiere, MOTHER’S DAY has lost none of its knife-sharp satire and this influential splatter outing remains recommended to the most seasoned of scary movie fans.

Also arriving with a bloodstained bang in February is 1987’s SLAUGHTERHOUSE! And if you loved THE TEXAS CHAIN SAW MASSACRE and THE HILLS HAVE EYES then you are sure to pig-out with the sicko-shocks of eighties fright-favourite SLAUGHTERHOUSE. This corpse-ridden classic introduces one of the screen’s most memorable madmen in Buddy a cleaver-wielding backwoods baddie who, along with his father Lester, doesn’t take kindly to trespassers. Buddy was brought up killing and packing meat, but now his rage turns to teens and market-capitalists seeking to buy-out his dad’s property. The end result is a tongue-in-cheek terror totem that returns from the dusty VHS vaults to BluRay in this great new worldwide premiere HD master - scanned from the original negative by director Rick Roessler!

Last but certainly not least we come to one of the original UK video nasties: 1981’s DON’T GO IN THE WOODS. This delirious camper-crippling offering doubtlessly attracted the attention of the anti-horror brigade due to its misanthropic madness and non-stop splatter action. A must-see slasher shocker, DON’T GO IN THE WOODS is a Utah-lensed, limb-lopping bout of slice and dice lunacy which also packs in plenty of comedic carnage and a natural park setting that provides a touch of creepy claustrophobia. Once banned but now available in all of its uncut outrageousness, 88 Films is proud to present DON’T GO IN THE WOODS with a new HD transfer overseen and approved by director James Bryan!