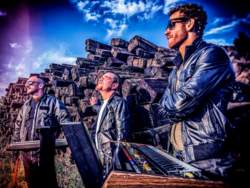 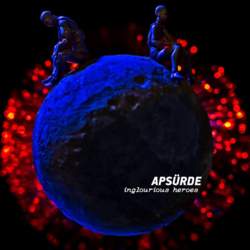 No Matter What We Do, We Will Always Sound Like Depeche Mode

Set up in 2006 and hailing from Budapest (Hungary) Apsürde last year released their official debut full length entitled “Inglorious Heroes” (ScentAir Records). The previously released EP “See Me Coming” was an interesting teaser revealing a talented synth-pop formation inspired by Depeche Mode. The album only confirmed their talent… and their main source of inspiration. The trio Gábor Csontos - Ádám Szakács - Ákos Szénási will appeal to lovers of ‘classical’ electro-pop music. We had a chat with Ákos.

Can you briefly introduce us to the sonic universe of Apsürde? What have been the main purposes and accomplishments so far?

Back in the 80s, I grew up as a child in the Eastern Block and Depeche Mode had a real big impact on me. Then, when Alan Wilder left the band, I felt emptiness, which I was trying to fill in with the creation of Apsürde - as a therapy… (lol).

Your music indeed clearly sounds inspired by electro-pop and more especially Depeche Mode. What fascinates you in the electro-pop genre and what makes the magic of Depeche Mode?

Generally speaking I think when you’re about to deal with a music genre, you’ll get influenced by that sound giving you the greatest feelings in life or that can get you away from the greyness of the daily life. I personally think electronic music has these aspects; and particularly Depeche Mode could influence me in that way. I’m getting in the mood instantly, even today when I listen to their earlier records.

80s electro-pop music was characterized by the magic of analogue equipment, which also is an important aspect in your composition. What can you tell us about the importance of this equipment in the writing of your music?

This question is more like one for Gábor as he’s experienced for decades now with the world of analogue equipment; additionally he has numerous analogue synthesizers. However, we all agreed from the very beginning, that in order to get this warm, but extremely dynamic sound, we would need analogue instruments and had to use samplers for the guitar sound while VST plugins were out of the picture.

Your last year released your debut full length “Inglorious Heroes”. How do you look back at the composition of this opus, was there a main focus and what is the title all about?

We’ve been working on this album for 5 years. None of us are music professionals, I mean it’s not our daily job. We also had to face many challenges like one of the band members who left the band, another one lost his job, one of us got a child or is building a house etc. Next to this, we didn’t have a manager or a record label that could give us a push to finish the album but at the other side we also were lucky because this way the album expresses our real sound and spirit. Deadlines often makes the process go a lot more smoothly.

In terms of the content, the album is very ‘colourful’; the songs are moving from playful synth-pop (cf. “Endless Race”) to the ‘dark’ technocratic “Intro”, but there are also meaningful and mutual ballads on it. That was our way to express those 10 years of moods, feelings and the golden age of synth-pop. Relationships are one of our frequent topics. The title of our album reflects it all. We were aware of the fact that what we were going to create would more likely to be hitting a particular scope of people.

“Inglorious Heroes” is a well-crafted and mature production, which I really enjoy listening to, but sometimes I get the feeling the Depeche Mode influence is too explicit and maybe suppressing a more personal sound and style. I would like to get your opinion about this point?

I agree you can definitely link our sound with Depeche Mode but I think this is because of Ádám’s voice. He’s not trying to sound like Dave Gahan but he indeed has a similar timbre of voice. And when it comes to record the backing vocals in a higher tessitura, he sounds like Martin; amazing isn’t it?!

This said and no matter what we do, we will always sound like Depeche Mode but, we think this is just fine. Nevertheless we agreed to go in search for a different sound. It’s a process of experimenting to one day find our way.

As a matter of fact, it is a great trap to start making music as a Depeche Mode fan. To give you an example, if someone plays the guitar and gathers a drummer and bass player to make music, they’ll rarely perceived as ‘they totally sound like Metallica or Guns’n’Roses’. And what really makes this dilemma interesting is that I think that rock- or metal music are a lot more restricted than electronic music. In other words, if you make music by using ‘particular’ synths and samplers plus additionally you have snares in your drum track and you spice it up with a male baritone singer who is an introvert melancholic type of person; you’ll be sure to get as feedback: ‘oh, this sounds very much like the Depeche Mode’.

Our aim is not to copy the music or the sound of Depeche Mode with the exception of “Endless Race” as this is our way to honour and show respect to Vince Clark and that special decade. These songs were like born in us, obviously hugely influenced from our childhood as we used to listen to Depeche Mode on our walkman all day and night long.

How difficult is it for an Hungarian formation to reach a wider audience and what’s the importance/impact of social media, live shows and the clips you’ve made?

Early in the beginning we wrote our songs in Hungarian. Then Gábor joined us and we instantly realised that with his skills and his marvelous synth collection we could consider making an international career. Thanks to one of my friends we got in touch with Ádám. We heard his Depeche Mode cover version of “Home”, which was featured on an official ‘tribute’ album. When I heard him singing the first note of the song I knew we needed him and with him on board we can start to dream. Then we met Linda, our songwriter, who excels in English while she’s experienced writing lyrics in English, in fact, she’s also singing on our album, a duet (cf. “Going On”) with Ádám. She’s involved with soul and jazz but I thought it could be interesting having her on board.

The music videos shown at our performances and in the video portals are my work and I’m also responsible for managing the band’s appearances on social media. I think social media enables the bands to reach out a larger audience however it’s kind of ‘full’ now and does not really help to distinguish your music, your band from the others. If you don’t have a massive record label and financial support behind you, it is extremely difficult to reach a wider audience.

Due to the fact that I’m a Depeche Mode fan, it was nearly inevitable for me to have a vision similar to Anton Corbijn’s one during these years. I don’t think that I’m copying him but I’m simply expressing myself with the help of his styles, visually. It just happened you know…

Hope to speak you soon and don’t forget - “Back To The Future!”

VANGUARD • We Had The Concept Of Doing Something That Ties Man And Machine Together
ANDY GILL (GANG OF FOUR) • 'You never expect Gang of Four to be very optimistic.Do you ?'
KILL SHELTER • There Is An Inherent Darkness And Sadness In The Music I Create
GNOSTIC GORILLA • WAKE UP! We are really in deep shit if we don’t snap out of this siege mentality and we need to stop killing the earth!
ERNEST MOON • “Our interest in the literary arts is equal to that of music.”
SHANE EMBURY • 'The one thing I try is still make the projects unique to themselves'
LAIBACH • 'In reality, nobody really wants to solve a Korean problem.'
JO QUAIL • 'I guess I’m a bit difficult to categorize!'
51 PEG • Breaking A 14-Year Absence: An Interview With 51 Peg
BORGHESIA • Like Every Style Of Music, EBM Also Had A Limited Period Of Duration