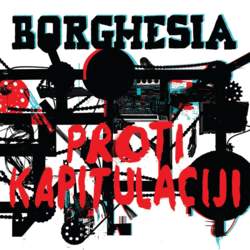 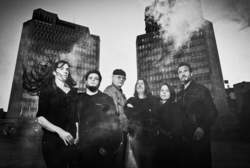 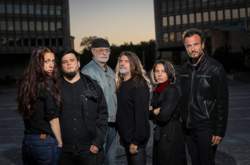 Like Every Style Of Music, EBM Also Had A Limited Period Of Duration

Set up in 1982 in Ljubljana (Slovenia) Borghesia became a so-called pioneer in the electronic-underground scene. Early albums such as “No Hope No Fear” and “Escorts” both released on Play It Again Sam became EBM-icons. They next went on releasing noticeable productions such as “Resistance”, “Dreamers In Colours” ao, but the influences progressively evolved. The band finally stopped their activities in 1995, but came back alive in 2009. Core members Dario Seraval and Aldo Ivančić got joined by new members. The band released a new album entitled “And Man Created God” (2014) on Metropolis Records. And now they’re back again with the opus “Proti Kapitulaciji” released in their homeland on the independent label Moonlee Records. The work reveals a very own approach mixing elements of industrial- and rock music. I had a chat with Aldo Ivančić. For this interview I would like to thank Side-Line and Peek-A-Boo for their interest to each publish this interview as a kind of ‘collaboration’ between both Belgian online platforms.

How would you introduce Borghesia ano 2019 while reflecting items such as line-up, sound & influences, production and live performances?

The line-up is: Dario Seraval (vocals), Irena Tomažin (vocals), Jelena Rusjan (bass guitar and vocals), Ivo Poderžaj (vocals, bass guitar and guitar), Sašo Benko (guitar), Aldo Ivančić (drums), Lina Rica and Boštjan Čadež (video), Primož Vozelj (sound engineer) and Igor Remeta (lights). So, quite a big project with a lot of people. We like every kind of music and for this project we explored music from the beginning of 20th century, artists like Luiggi Rusollo, Marinetti, Kurt Weill, Russian constructivists... very interesting stuff ;) Our new performance is kind of multimedia with prepared computer graphics with live processing and live performance combined with back tapes from computer.

“Proti Kapitulaciji” is your newest full length album. What kind of work did you want to accomplish and how do you look back at the writing and recording process plus the multiple contributors (mainly singers) of the work?

We worked for 3 years on this project. First we selected 12 poems by Srečko Kosovel and it was very hard to make a decision, because he has a lot of good poems. His poetry is timeless and a lot of people were surprised when they discovered that these lyrics where written 100 years ago. Can you imagine that he wrote 100 years ago: ‘The phone lines are all dead, Oh, but this one is cordless’.

Very visionary. So, the central point of the record is definitely the lyrics and we built the music around them. Most people think that W. Burroughs is inventor of cut - up technique, but we think, that Srečko Kosovel had invented it 50 years earlier. He called them ‘Kons’ (Constructions). Our approach was in a way cinematic in editing the lyrics like the film is made of different scenes. That is the reason why we used a lot of different vocals in one song. It is not very often that you can hear it in ‘pop’ songs. Maybe Frank Zappa, but this is another story;)


You just mentioned Srečko Kosovel as main source of inspiration. While he’s a kind of Slovenian icon of poetry, I guess he remained unknown for a lot of readers and people. Tell us a bit more about him, his work and the influence he had on your work as musicians?

Srečko Kosovel was a strange bird. He died at the age of 22 and as a radical anarchist he was not popular in his time nor is he today in petite bourgeoisie society. Even today he does not have a single monument in the capital of Slovenia and still after four months, our record was not presented on National Radio and Television. No review at all.

From the song “I Protest”:

Everyone of you, sitting in theatres,

and other haunts of pleasure:

Janez the Humble, the Craven, the Grandiose.

(Janez is common name in Slovenia like John in GB)

but Europe is lying.

The dead is Europe!


So we easily can consider “Proti Kapitulaciji” as an ‘engaged’ work; a reflection about the social-, cultural-, artistic- and political situation of the ‘great’ Europe! What did you try to express?

After the fall of the Berlin Wall, we thought that better days were coming for Europe. But we witnessed a war in Yugoslavia in which 140 thousand people were killed, we saw the lies about WMD in Iraq (courtesy of Tony Blair and other bandits), then Libya, Syria, now we have Brexit, the rise of right wing nationalists in almost every country, xenophobia, hate fake news, egoistic, competitive selfie narcissistic culture, stupid reality shows, uninterested pacific hipster youth promoting stupid values, corporative ‘truth’....

You often have been considered as a ‘controversial’ band because of your imagery and themes, but in the end it was all about artistic freedom. I can imagine it hasn’t been always easy to handle and do you think things have changed today when it comes to artistic freedom and controversy?

We think that today is even worse, since Thatcher/ Reagan neo-liberal politics occupied everything, media and political floor. We were always fans of critical artists like Woody Guthrie, sixties music, punk, The Clash, Sex Pistols, Test Department... Today it would be impossible for such artists to reach the wider audience. You just have to compare top charts from the past and today.

The EBM community recently celebrated the international EBM day (-24/2 - February, 24th). What does EBM mean to you today and what did you keep in mind from the early years of EBM when you were considered as ‘pioneers’?

Like every style of music, EBM also had a limited period of duration. First comes the innovative, creative period, then the commercial one, and then the decline, just repetition of itself. We are very proud that we were part of this innovative period, but after so many years we are not the same persons anymore and the world has changed. EBM in some way become EDM and 95% of music today is made on computer. We were one of the first musicians that had an Atari on stage.;) Today a smart phone is 1.000.000 times more powerful than Atari and now you can make music on a smart phone on the beach and this is very nice. In a very near future there will be Artificial Intelligence composing music to suit your personal taste, Artificial Intelligence will write books to suit your tastes... Most people will just be good consumers controlled by multinational corporations ;)

JAPAN • Anthony Reynolds, Author Of Cries And Whispers- “A beautiful, rare bird trapped in amber.”
STEPHEN PERKINS(JANE'S ADDICTION, PORNO FOR PYROS, SUMMER MOON) • 'Today, we can play with tomorrow!'
STEVE IGNORANT (CRASS) • 'I think what drives me is the endless injustice that goes through life.'
SYNAPSCAPE • A Fascinating Challenge About Bringing New Life Into Old Tracks
BIG JOHN DUNCAN • 'I don't like to copy things, I like to try and be original and always happy!'
DEAN GARCIA - SPC ECO + CURVE • “..I love recording, it's one of the only things that is completely absorbing for me..”
HOT PINK SATAN • “Squirt” is a true story. “You better work, if you want to see me squirt”. I mean, we shouldn’t have to explain that one...'
MISSING IN STARS • 'This music is for everyone, even my closest metal friends support it...'
DAVID THOMAS (PERE UBU) • “When you achieve that timelessness, even for a few seconds – it’s beyond description!”
MICHAEL CIRAVOLO - BEAUTY IN CHAOS • 'I am forever indebted to everyone involved in Beauty In Chaos. We are friends, and now family with what we all created'.

Other reviews from BORGHESIA
BORGHESIA • Today we live in a smart world where every kid has studio in his smart phone. More than 90% of top chart music is electronic. But there is still a place for innovative music.