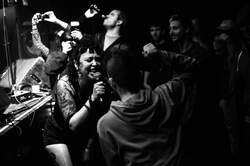 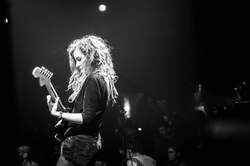 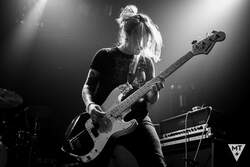 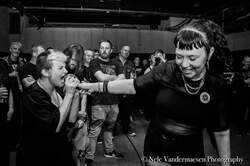 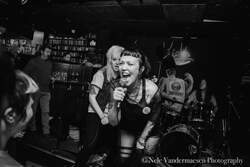 We all work with homeless people on a daily basis and we try to be actively involved in their struggle.

Punk is not dead. The Breaking Barriers festival in Leuven - founded in 2016 to celebrate the 40th anniversary of punk - continues to keep its finger on the pulse. They will have a new edition on May 20. We don't need to introduce the main act Pussy Riot the the anarchopunk veterans of Hägar The Womb. Hetze – Dutch for agitation – on the other hand, is still very young. They have been around since 2017, but they already have a great reputation. Malcolm Nix spoke to the ladies (and gentleman).


Hetze is still a quite young band. Did you have any past in other bands before you founded this band?

Not that much. Viktor had the most experience, because he's been playing in various bands for fifteen years. He's also the drummer of Bones, an excellent death metal band worth checking out. Carla had a bit of stage experience and Dorien sometimes played bass in Travolta. For most of us, Hetze was the first real experience with a band.

What drives young people to start a punk band? Didn't your peers tell you it's trendier to make hiphop, dance or sensitive ballads?

No. Actually, we're not that young any more, but thanks for the compliment. We don't know a lot of people who listen to dance or sensitive ballads. We like it hard, harder, hardest, although throughout the years we started to appreciate more genres. A bit of hiphop in the car or dance during an afterparty are definitively options. What genre you play doesn't matter, as long as you do it with conviction. Put your heart in it, because otherwise it will remain hollow. The cool thing is we get to see bands who don't fit our genre, but who we appreciate because they perform well. Being blown away by a band, no matter what the genre is, is the most beautiful thing there is. Hetze is a way of showing our discontent with various societal issues. Screaming at the top of your lungs and producing noise are the best ventilation valve in a world that looks increasingly indifferent. There's no age limit on punk. We know people bordering on 60 who still manifest the punk spirit with conviction on stage.

The punk scene has been around for a few decades now. To which extent do you consider yourselves the heirs of a tradition? Which older bands have influenced you the most?

It's brilliant that a lot of young bands make very good music. We do our best to keep up with new music and not just listen to the classics. The radioshow Wangedrag is a good tip for those who want to be up-to-date. Just like other bands, we try to do our own thing, but in the contemporary music scene it's all about certain nuances or influences that differ from the rest. In our case, it's a mix of traditional hardcore, powerviolence and, because of Viktor's background, an death metal edge in the drums. If we have to drop some names, bands like Health Hazard, Disrupt, Despise You, Spazz, Seein' Red and Dropdead have been a big inspiration.

I wouldn't dare to claim you're motivated by financial gains, but a bit of recognition is always nice. Does the racket you produce get some positive response from young and/or older music lovers?

Money and recognition are definitely not the same. Getting recognition is a nice thing. In this regard, Hetze is a bit spoilt. In a short period of time, we've become a stalwart of the punk scene in and around Belgium. Our shows and our records are doing better than we had dared to hope in advance, leaving us feeling absolutely blessed. The fact we're invited to perform during the Obscene Extreme festival, for instance, is just crazy. The best response we can get is a wild moshpit and everybody in the crowd going bonkers.

The previous question obviously referred to the era before the pandemic overturned all our lives. How did you survive this period without live concerts? Do you have any tips for musicians to hang on to their motivation, so they won't lose the joy playing music brings them in times like these?

In the beginning, this forced time-out was a bit of fun, but by now it has become almost impossible to maintain. We really miss the contact with people and the energy of live shows. We released a split EP with Trappist. We didn't wait for the pandemic to end to release new music. Because there weren't any live shows, people wanted to support the bands and bought their music. This motivated us to keep going. We're currently writing songs for a new full album. During the first lockdown, when we weren't allowed to rehearse together, we had some fun making Hetze mouthmasks and selling them for a worthy cause. We are blessed with an extremely creative singer, who also knows how to sow and to tinker. Each member of the band also recorded some footage, which we turned into a promo video. That way we weren't just being idle and it also gave us an opportunity to promote our new split EP, which was released right before the lockdown. This might be a tip. Where does your band want to stand for? It doesn't necessarily always have to be music.

In spite of all the positive experiences, something's bound to go wrong sometimes. What's the worst or the most depressing you've experienced on the road so far? Which lessons can we learn from it?

For now, we've been mostly blessed. Something that could have been depressing, was the fact that a member of the opening band had died shortly before our concert in Trier. The audience then listened to their album and the whole night was dedicated to this person. All that support and the community feeling, that's the beauty of punk. By the way: RIP Tommy.


In May 2022, you'll be playing live at Het Depot in Leuven, Belgium, with Pussy Riot, an ensemble whose criminal records are longer than their discography. The reason is, of course, that they live under a dictator who oppresses all forms of dissent. To which extent are you actively involved in protest?

It's horrible what Pussy Riot has been put through. You can find us at protest rallies regularly, but we don't go to every possible demonstration. If something really affects us, we'll be there. We all work with homeless people on a daily basis and we try to be actively involved in their struggle. As social workers, we try to defend their interests on the local level. That way, we try to generate some changes for the most vulnerable members of society. We've noticed the struggles at the bottom are getting harder and harder. An increasingly rightwing policy produces more and more exclusion and poverty. With Hetze, we try to participate regularly in fundraising activities. That way, we try to draw attention to various projects and try to draw attention to specific issues. In our opinion, protest also means standing up and opening your mouth if you're a witness of discrimination or injustice, ensuring the victim feels supported instead of isolated. These days, most demonstrations are organized by shady rightwing extremists, trying to use a general feeling of discontent to recruit new members.

What do you consider the biggest threat to society, if we can still use that word?

Intolerance and social media. All too many people just believe everything they read on social media platforms. The rightwing knows how to use this very well. They operate very cunningly, and a lot of their views have become mainstream throughout the years. They create fear and polarize, which is quite frightening. Apathy kills! Our shortest song summarizes it all in just 7 seconds. On the other hand, we still want to believe most people are decent. We see a lot of groups who try to connect people, civil movements defending solidarity, small-scale actions by ordinary people who organize themselves, etc. We also see lots of young people who organize themselves and organize actions related to climate, LGBTQ-rights, women's rights, etc. Maybe we should have a little faith in the coming generation.

It's never easy for a Belgian band to build up an international reputation. Our country is mostly known because of its beer. Ironically, your split EP with a Californian band with the unlikely name Trappist demonstrates this perfectly. Is there any interest for your music in other countries or do most of your concerts still boil down to a trip through the ten provinces of Belgium?

We played with Trappist in Het Bos in Antwerp. It's amazing that Trappist, featuring members of Spazz and Despise You wanted to release a split EP with us. The previous Split LP, with the German band Dismal Fucker, was the result of a legendary night at JH Sojo in Leuven, where we first met them. This led to a strong friendship and the decision regarding a split release came shortly afterwards. Next year, we'll be playing several concerts in Germany, The Netherlands, the UK and the Czech Republic. A tour of Germany and the UK are being planned now.

That's the beauty of the DIY-scene. It's a small, but international scene and people across all borders try to help each other by organizing gigs, offering places to sleep and share contact details. Each one of us, has at one time offered a band to sleep at his or her house, organized a concert or cooked dinner for other bands. Do you have any tips or suggestions for starting bands who are keen to produce punk or other extreme sounds without any commercial potential? Which errors should they definitely avoid? Go to a lot of concerts, have fun and support other bands. That way, you'll get to know a lot of new people, which will get a lot of things started.

Hetze at Breaking Barriers, with Pussy Riot and Hägar The Womb. 20 May 2022

NINO SABLE • I am not a friend of boxed content...
MARROWVOLTAGE • There is always a strong, dominating motif behind any of our songs. A feeling, a powerful association. For example, the gravitational force of an abyss underneath you. The movement of mighty and elegant creatures in the
LACRIMOSA • There were times when I could hardly believe that I would ever be able to finish the album.
ADULT. • 'We have worked and risked so much to make this tour happen, so pleeeeeease come get wild!!!'
ECHO ROAD • 'There was no easy way or any shortcut to be taken in terms of producing something truly representative of the human experience. We simply had to ‘just do it'.'
IRDORATH • I still don’t understand how participation in peaceful rallies can be repressed with prison sentences.
GOETHES ERBEN • Politics and society have generally used the arts and the cultural sector as whipping boys in the pandemic.
THE REBEL RIOT • Protests in Myanmar are scarier because they shoot with real bullets here
PANIC LIFT • 'I have been blessed with bands and producers giving me absolutely fabulous remixes.'
25 YEARS OF AHRAYEPH • Everything I do, right or wrong, is being determined by my autism