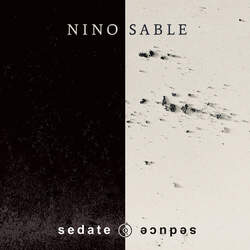 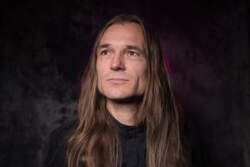 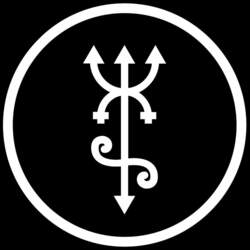 This ‘new’ project’s name is Nino Sable, which is also the name of Dark-Goth-Metal band Aeon Sable’s singer. With Aeon Sable Nino released seven albums but now he found the time ripe to produce his first Nino Sable solo album! Peek-a-Boo had a chat with the mastermind himself!


Some of us might know you from the band Aeon Sable with whom you released about seven albums so far. Why start this solo project?

Before the pandemic I was mainly the singer of the gothic rock band Aeon Sable. I sometimes wrote music, but my last record (Melanculia - Seventh Circle) had been released 4 years ago and the project was discontinued.
With the pandemic, the studio closed its doors and I had to manage my own affairs. Inspiration was everywhere, while the pressure of state and society spat into my face. I had a job to do. I had to conserve this atmosphere - this Zeitgeist. I bought a computer and some software and started composing and recording. During the inferno of 2020 and 2021 I finally got access to the Artsphere and wrote around 30 tracks. Everything that had to be said, had to be felt…

If I’m not mistaken you did compose everything by yourself on this debut album, music, lyrics … Is this by choice or rather by circumstance?

On the first pass, I wrote all the tracks on my own and as a second step I gave these raw demos to my friend Lars Kappeler (Sweet Ermengarde / OBB) in order to have them arranged in a professional way. Lars did a huge update on the tracks concerning production and also added some characteristic goth vibes by including and changing some instruments.

On the Nino Sable Bandcamp one can read it took you 15 years to release this debut album. Why did it take that long?

Well, it isn’t like I have never released an album before - but it never happened under my own name. I just had (and participated in) several projects. In 2021, as a matter of fact, I decided to sail under my own flag. I wanted absolute freedom in terms of creation.

But then, in 2021, you managed to release a new song each and every month? Was this planned like this? And didn’t it put you in a stressful position to continue to deliver month after month?

Delivering new creations wasn’t the stressful part, promoting them was. On the one hand, continuous hard work was necessary to be able to produce and promote at the same time, but on the other hand, I gave my all to keep my friends and fans entertained during those tough times. I did what had to be done.

Can you elaborate the title ‘Sedate ⊚ Seduce’ to our readers?

‘Sedate ⊚ Seduce’ is a hint to the duality that led me into Artsphere. Sedation is the initial ritual, seduction the second, while between both - art is born (symbolized by the ⊚ CD). If you take a close look at the CD design, you’ll see that ‘sedate’ and ‘seduce’ turn around the ‘⊚’.

Symbolism seems to have an important place in Aeon Sable as well as in this project. Can you tell us why and what some of the used symbols stand for?

What some people don’t know is that I am a media designer and in that function, I designed sigils for each member of Aeon Sable back in 2012. In Nino Sable I am using my old sigil originally designed for my persona in Aeon Sable. It stands for the “voice of the seventh son of moon and sun”and in my opinion, it perfectly fits my nowadays role.

Do you have plans of performing live with this project and how will you approach this seeing you are, so far, the only member?

We have a very motivated live crew and together we have already performed live last year. The feedback from the crowd was wonderful. So, yes. We will be performing Nino Sable live out there in the future - as soon as stages were available again for “small artists”.

Classifying your music as simply Goth-rock would maybe be too easy and straight forward because I think the album has so much more to offer so how would you describe your music?

I can’t. I am not a friend of boxed content. Of course there is the spirit of goth in each track but you can find so much more. This album also includes pop and psychedelic rock, synth-wave, dark-wave, electronic, cold wave, post-punk.

And finally the inevitable sort of question a band / musician creating “Goth-Rock” music can not escape from … Please rank The Sister Of Mercy, The Mission and The Fields of The Nephilim to your personal taste and tell us IF they had an impact on your music and why … If you ever heard of them of course. :-)

I have been mostly inspired by black metal in my youth. Later, with Aeon Sable, Gothic-Rock came into my life and so I got to know all the goth classics. Yes, of course the artists mentioned above inspired me but – I have never idealized any of them because there are also a lot of industrial, metal, drone, ambient, synth (…) artists ★ in my playlist.

MARROWVOLTAGE • There is always a strong, dominating motif behind any of our songs. A feeling, a powerful association. For example, the gravitational force of an abyss underneath you. The movement of mighty and elegant creatures in the
LACRIMOSA • There were times when I could hardly believe that I would ever be able to finish the album.
ADULT. • 'We have worked and risked so much to make this tour happen, so pleeeeeease come get wild!!!'
ECHO ROAD • 'There was no easy way or any shortcut to be taken in terms of producing something truly representative of the human experience. We simply had to ‘just do it'.'
IRDORATH • I still don’t understand how participation in peaceful rallies can be repressed with prison sentences.
GOETHES ERBEN • Politics and society have generally used the arts and the cultural sector as whipping boys in the pandemic.
THE REBEL RIOT • Protests in Myanmar are scarier because they shoot with real bullets here
PANIC LIFT • 'I have been blessed with bands and producers giving me absolutely fabulous remixes.'
25 YEARS OF AHRAYEPH • Everything I do, right or wrong, is being determined by my autism
SOPHIA LUCIA • Blurring Boundaries