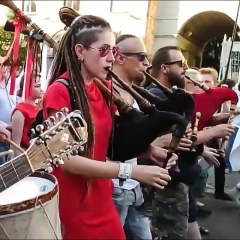 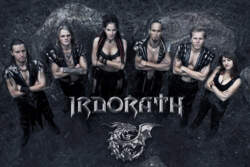 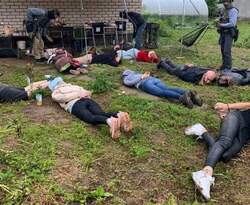 I still don’t understand how participation in peaceful rallies can be repressed with prison sentences.

With the current war raging in Ukraine, we could almost forget what is happening in Belarus, the northern neighbour of Ukraine. Five musicians connected to the Belarussian fantasy folk band Irdorath are currently in jail. Their crime? They protested peacefully against the election results of August 2020, which were broadly claimed to be rigged.

The protests were answered by the regime of autocrat Alexandr Lukashenko – who is in power since 1994 – with merciless repression. We had the chance to talk to Aliaksei Palauchenia, the drummer of Irdorath who also spent 15 days in jail after the violent arrest of the band members and their supporters at the birthday party of singer Nadezjda Kalach.

Aliaksei Palauchenia: In connection with the events in Ukraine, I am obliged to say on my own behalf and on behalf of Irdorath that right now there is a monstrous war going on in the country where our friends and relatives live. We beg to stop this crime against the people of Ukraine!

Thank you Aliaksei. Let’s focus on what’s happening in Belarus. How was Irdorath formed and how did you join the band?

Thank you for your interest in Belarus and Irdorath. Irdorath was born in 2011, when Vladimir and Nadezhda Kalach – the founding members of Irdorath – moved from Grodno to Minsk, where there were more opportunities to implement the project and find musicians for co-operation. Until that time, they had been playing together for several years: Vladimir on bagpipes, and Nadezhda on davul. They played at medieval festivals, street fairs, holidays - it was a good experience. But it was time to move on, there was an understanding that they were ready for more.

The first to join the duo was Anton Shnip, a talented musician and sound producer, and it was these three people who created the project and set its direction in music. In 2012 Irdorath presented the debut album ‘Ad Astra’ and then the line-up of musicians became wider and changed periodically. Concert activity in Europe began.

I had heard about Irdorath many times, but I did not see them at concerts until 2018. In December 2018 we participated together in the Christmas festival in Minsk. I came with my band Osimira and saw how they performed. It was a well-staged costume show with an explosive program! It was immediately obvious that Irdorath had a lot of experience on the European scene. Later I saw an ad on social media that they were looking for a drummer from Minsk. I live in another city 200 km away but still decided to come to the casting.

Not everything worked out right away but in January 2019 I started coming every week for rehearsals, and after a few months we played a big concert together in Munich! During that year we travelled to many countries for concerts.

Irdorath describes itself as a fantasy-folk band. The songs are often based on traditional folk themes but the songs also tackle fantasy themes and serious societal criticism. Can you tell us more about the subjects of Irdorath’s music?

The image of the musical heroes of Irdorath, as it were, take us back to fairy tales and legends. We use the images of mystical creatures to describe different human qualities, not from the side of magic, but more often from the side of real emotions and feelings, from joy and admiration to hatred and deceit. Everything you hear in music is a reflection of the modern world and what is happening in it. Some of the material we have is from Western European folklore but most songs are Belarusian and author's songs. Irdorath has songs in different languages and everyone will find something of their own. And, of course, there is enough instrumental music.

During the mass protests against the election results of August 2020 and the police repression that followed, musicians of Irdorath decided to participate and play music during the marches. Why did they decided to do so?

Good question. At that time, it was not a question for us. It seems to me that just everyone who felt that it was time for a change came out. There were so many people and it was natural. These were emphatically peaceful processions. I think you have seen these shots - they can be easily found on the internet. The musicians went out and did what they do best - play for people, cheer them up. For me, they are not guilty, neither are the several thousand people who are now deprived of their liberty.

Were they aware that participating in the protests was dangerous? Did they know that they faced the danger of long prison sentences?

I still don’t understand and the whole world with us doesn’t understand how participation in peaceful rallies could be dangerous. No one thought about prison terms. This could not be in the rule of law. Unfortunately, we still see new details of detentions and arrests in the news every day. We are waiting for the release of our friends and colleagues.

At the end of 2020, several members of Irdorath lost their jobs at the Viktoryia Children and Youth Centre due to participating in yard concerts in Minsk. Can you tell us more about this?

I can't answer you. But I really hope that people keep a record of all employees dismissed for conscience reasons since that moment. It's thousands and thousands of people. These layoffs are ongoing.

You were present during that fateful night of 2 August 2021 when several members of Irdorath were arrested. Can you tell us what happened?

It is very strange to detain musicians representing Belarus in Europe like this. I will refrain from commenting. I can only say that we planned to celebrate Nadia's birthday and half of the guests met there for the first time. Draw your own conclusions.

As a result, you and others were convicted to 15 days in prison for disobeying the special forces that made the arrests. Meanwhile, 5 people received long prison sentences: 2 years in custody for singers Vladimir and Nadezjda Kalach, and 1 year and 6 months for their fellow musicians Piatro Marchanka, Yuliya Marchanka and Anton Shnip. Do we have any news of how they experience the prison?

I can't speak for the guys, but from my experience I can say that the first thing is shock. Shock is everything. Emotional breakdown and depression. Imagine that they were imprisoned without a court verdict for four months. Four months of waiting... and what is it like for Vladimir and Peter to know that their wives Nadezhda and Yulia were in the same building and there was no opportunity to see each other. And how does Anton feel? His bride is waiting for him. There was hope for a different outcome but this did not happen. Recently, Nadezhda and Yulia were transferred to a colony in Gomel.


Where do you live right now? Can you still walk freely in Belarus or is it dangerous for you too?

I left Belarus with one suitcase of things. Now I am starting my life from scratch in another country. All over again. It's not easy but it's quite possible. I believe that we will definitely get together again and play at the best festivals in the world!

I thank you for the interview. Now and during the entire period in prison, my guys and their families really need support and help. You can write a letter without a political context or transfer money. All information can be found by hashtag #freeirdorath

The five members of Irdorath are recognized as political prisoners. You can write the at the following addresses:

You can donate for the prisoners of Irdorath through the Belarussian Council for Culture.

You can find all the information on Irdorath and the actions of solidarity with the prisoners under hashtag #freeirdorath.

GOETHES ERBEN • Politics and society have generally used the arts and the cultural sector as whipping boys in the pandemic.
THE REBEL RIOT • Protests in Myanmar are scarier because they shoot with real bullets here
PANIC LIFT • 'I have been blessed with bands and producers giving me absolutely fabulous remixes.'
25 YEARS OF AHRAYEPH • Everything I do, right or wrong, is being determined by my autism
SOPHIA LUCIA • Blurring Boundaries
MOVMENT • Finding Truth Through Dakness
JAH WOBBLE • 'Bass was considered being among dying instruments for years. Dub pushed it to the front...'
GRAVE JONES • Bringing Rock Back To The Charts
WHISPERS IN THE SHADOW • I’m not a conservative songwriter and I’m not interested in the status quo; I’m interested in progress.
WINTERSTILLE • There are two contradicting aspects of individualism: the promise that you can achieve anything and the blaming of the individual for not achieving it.