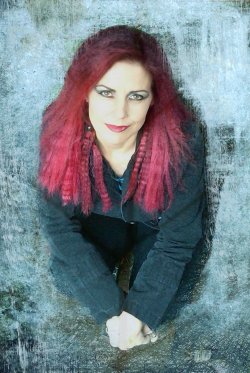 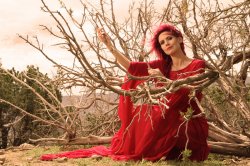 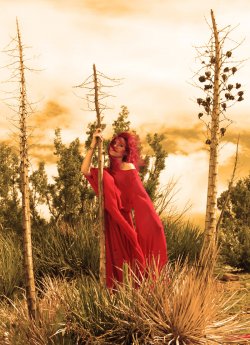 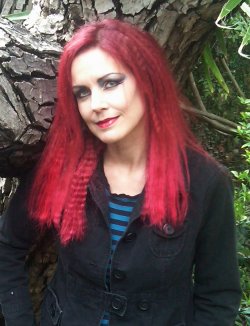 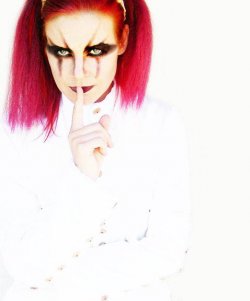 I am very much in a new stage of my life, to be sure!

It was in 1994 that Das Ich & Faith and The Muse toured together throughout Europe, with also a concert in The Steeple in Waregem. Undersigned was present and watched their show. FATM nailed me to the ground with their diversity and intensity. After the concert I raced as soon as possible to the merchandise stand to buy their CD and get to know their music (a bit better). Now, 17 years and many musical metamorphosis later, where FATM again and again managed to surprise their audience, frontwoman Monica Richards steps solo to the foreground with her great InfraWarrior project. So, high time to talk to this talented, friendly lady about her inspirations, past and future.

You are truly an all-round artist – music, writing, poetry, painting, jewellery, clothes. Where do you find the time for it all? What’s the common factor for you? How does the musical part position itself within all these art forms?

Monica: Thank you for that! I have my fingers in so many different pots!!! The common factor just seems to always be my Nature themes, it's in everything I do. I just can't help it. I've been this way since I was a child. Music is just one aspect - to me it's like painting, it's layering on a large picture, adding texture to the pallet. I am a bit visual about how I do my music, to be sure.

When creating a new album or a new tour, it always seems to be global concepts? Is there first a concept around which the work or show is built-up, or is this merely the synthesis of your different art forms?

Monica: All my work just seems to flow in and out of each other. I decided to demonstrate Women & Nature and thus the show was born.

Your lyrics are not always easy, not only by its vocabulary, but also if they’re getting poetic or cryptic. If English is not your native tongue, a lot of the beauty gets lost when you don’t find the courage to really study them. I guess a lot of non-native English speaking fans only understand your lyrics partially & focus more on the instrumental beauty & the beauty of your voice. Don’t you find that a pity?

Monica: Even those who speak English get from my lyrics their own definitions, so it's not too different. They may gravitate to the chorus, or a key word, not the big picture - like a painting that may mean different things to different cultures, it is all to be taken as it comes in.

Anafae, your graphic novels together with James Neely, accentuates your personal connection with Nature within a futuristic wasteland. Are you trying to convince people of the importance of (respect for) nature?

Monica: No, I am merely expressing my own intertwined feelings about it.

In the first part of this novel, “Anafae, Liber Prima, Awakening”, you mention the year 2046, which is in the near future. You expect our world to get this chaotic and catastrophic so fast? A pessimistic view of mankind?

Monica: I kind of think it's there already!

The latest novel of Anafae is called “Dreams of Dragons”. You’re latest FaTM album was also dragon related. Both seem to get some more oriental influences. Are you exploring nowadays other cultures/histories besides the Celtic one?

Monica; Yes, I delved into the Japanese shinto religion while working on ankoku buttoh, it's like another layer of world understanding. It's also all about the respect for Nature and the Otherworlds, so not unlike Celtic or Native American beliefs.

You’re music is so diverse. Nowadays, with FaTM & InfraWarrior, “Medieval, Celtic punk with ethereal voices” might be a good description in my opinion, however, I still forget the Oriental influences. How would you define it yourself?

Monica: I don't even know if I can anymore, ha ha! Possibly "pagan-electro-tribal-orchestral with some rock mixed in"…?

Monica: Infrawarrior is all mine and I think you can tell which FATM songs I wrote by now… Often people think I am just the singer of FATM but I am half of the songwriting as well. So I just work alone on my music, you may notice the guitar songs from FATM don't feature so much in my solo stuff… But that is changing now as I work with guitarists!

Where FaTM seems to me more story telling around certain subjects, mostly creating a coherent atmosphere for each album, InfraWarrior seems to me to be more like the explosion of your own soul, your personal thoughts, especially Mother Nature & Women (in general) seem to dominate the lyrics?

Monica: This seems to be quite a perfect statement!

You always have been keen to play some covers of other great bands. Songs like “Hollow Hills” (Bauhaus), “Running Up That Hill” (Kate Bush), “Soul In Isolation” (The Chameleons) or “Mesmerism” (Dead Can Dance). Mostly I don’t like covers, since they are often flawed. However, you always seem to get the proper interpretation? How?

Monica: Well, that's lovely to hear! I'm not sure, maybe you can tell we respect the artist we cover and try to do our own twist with that respect at the forefront. Sometimes, bands try and do a cover that's an exact replica, while others change it so much it doesn't sound at all familiar...

Someone I personally miss within this list is David Bowie…from whom, I guess, some songs could be fantastically interpreted by you…

Monica: Oh, I have often thought of doing Bowie covers!!! Who knows...

You might be considered a true cult hero from the gothic underground. However, the title nowadays seems to be torn apart from a secure income due to decreasing CD sales. How feasible is this lifestyle? How do you cope with it?

Monica: Most of my heroes are those who were struggling against all sorts of adversity, so I don't think being under hardship may tear that title apart, do you? But always keep in mind, FATM has been nothing but a very expensive hobby, always! There has never been a secure income from it, touring and upkeep always costs us dearly. Now it's even harder, that's all.

You’ve already had some musical episodes within your life. Hate From Ignorance, Madhouse, Strange Boutique, Faith & The Muse... and now InfraWarrior. Is this a new episode, or is it developing simultaneously?

Monica: I am very much in a new stage of my life, to be sure!

Monica: I knew Henry back in the day, when he was Henry Garfield and was pals with HR back then as well, before he became a bit… sporadic. My band Madhouse played with HR Band a few times! Haven't talked to either of them in 25 years or so…

With Anima Mundi you returned (kind of) to your roots, punk. In my opinion, a twisted kind of punk, where diversity of musical influences is still possible. However, this is (partly) for another audience than those who follow MR or FATM, not? You want to have this kind of diversity simultaneously? Was it just a one-time project, or can we expect something more?

Monica: One-time project. Brought on by the Bush era.

Small concerts vs. Festivals – I prefer small concerts, since the eye contact with an artist is so important, to see the expressions on their faces during a performance means everything to me. However, I can imagine that an artist prefers the platform of a bigger audience, that only a festival can give. What kind of performance do you prefer?

Monica: I love both! I love intimate surroundings but I also love putting on a big show! Right now I am experimenting, we'll see what the future brings!

To do a colleague a favor, I’ll (almost) end by asking his standard two questions as well. What’s your favourite record of all time and why?

Monica: The Damned: Machine Gun Etiquette. It was just an explosion of greatness to me that carries with it those great feelings every time I hear it!

Monica: Boudicca. I would love to hear her story.

(Boudicca was a Celtic queen, known as the leader of the revolt against the Romans in AD 61, ed)

What are the future plans? Live performances?

Monica: Right now just settling myself in with a new life and working away! I should be back in Europe in the Fall and possibly in the Spring as well.


Thanks for your time & this interview!

HYSTERESIS • We’d love to make heavy opera industrial avant-garde krautrock hardcore bossa-nova musicals, but we always get stuck in the first 5 minutes.
BIOSPHERE • I just got bored with beats.
PLASTIC NOISE EXPERIENCE • I don’t take the things too seriously, I will continue as long as I can enjoy it.
SAM • Honestly we don't know and we don't give a fuck what category our music fits in.
SAINTS OF RUIN • Without a doubt I would say Saints Of Ruin sounds like Saints Of Ruin.
TRAUMTAENZER • Living only in a dreamworld without facing the reality can`t be the meaning of live.
HEAVEN 17 • We always did take risks, sometimes to our detriment, but what is life without risk?
CRUISE [CTRL] • Cruise [ctrl] seems to be a UMO (unidentified musical object) for some people...
!DISTAIN • I can’t believe in a community based on lies while referring to God. And as this is really irritating me, I keep writing about it.
VELVET CONDOM • There will never be a song by Velvet Condom called “A New Morning”!