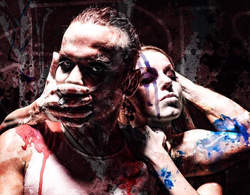 An Interview With THE DESIGNS

The Designs is the new project of Billy T Cooper (formerly of JTR Sickert) & Snovonne 'Sno' Drake. The duo combines electronic and metal elements but remains eclectic and at times, experimental. In fact, the music "is perfectly crafted to deliver the desired musical experience to the listener." The Designs are preparing to release their debut album. We'd like to thank them for their time in this interview.

You’ve both came from separate projects previous to The Designs. What brought you together and why the choice for the band name?

Sno: We’ve wanted to work together for a long time, but it wasn’t until about a year and a half ago that Billy asked me to direct some videos and sing guest vocals on a new album he was working on. Eventually I started working on lyrics too, did more and more vocals until it just became clear that we should make this our thing. And the album became what it is now. We love the band name, it really just rounds up everything we’re about, literally and metaphorically speaking. It’s a project with expressive visuals, very designed. Mentally, it’s intricate, yet to the point. Kind of how we would describe ourselves as people too.

In terms of focus or emphasis, what do you think separates The Designs from your previous projects?

Sno: Well, we were after blending the characters our previous projects. You have the creepy melancholy of Snovonne and the decadence and aggression of JTR Sickert. Stitched through with a lot more electronics.

Billy: But also the production side of things is new and fresh for us. We’re both very happy to finally work with a producer that we respect and trust as much as Eddy Cavazza. We let him take the ropes with this one and it’s been really exciting for us.

Is it more important for you to evoke an emotional “gut” reaction in your listeners or to get them “thinking” a new perspective, so to speak?

Billy: The gut feeling is definitely important, since that’s how we tend to write, by instinct... just throw up our thoughts into tones and words, without caring or worrying about a reaction.. then clean up afterwards in later stages :) But it would be nice to get people thinking too.

Sno: Like everything emotional, it’s all about points of view and perspective. We just might spark up some different thoughts in people.

(BILLY) I read in an interview that you were a criminal lawyer who councils psychopaths at mental hospitals. Do you ever find that inspiration for your song writing comes from specific patient situations? Care to give any examples without divulging patient info?

Billy: Well, without being too specific - some of them are artists too… their paintings and sketches reflect the experienced crime or disorder. And I feel like we’re not always so different from them - in terms of obsessions, addictions, secret desires, feelings of isolation and not being able to be a part of a world where everybody pretends to be normal without really knowing what normal is, or should be. Some studies focused on rage tell us we are all capable of something terrible, and I do sometimes get that feeling. Through studying these areas I learned that we need to find our talent, passion and use it to fight all the rage and sadness we feel. So in that sense, it is inspiring.

Speaking of mental health, for the both of you… what do you do to stay balanced and mentally healthy?

Sno: Well, for me writing and filming is a way of staying mentally healthy, I’s therapy, exorcism. It just gets hard to shut the brain up afterwards, so I do anything I can… Nature, books, mediation, workout. I love cooking too. Anything that keeps us grounded and feeling human.

Billy: Yes… music, always, writing and listening to different styles, being curious about art in general, I love books, sport inside the nature, and lots of good food and wine. And I appreciate basic simple things.

What would you say your most obvious and least obvious musical influences would be?

Sno: We both listen to so much different stuff.. Least obvious - probably my undying love for soul & RnB.. Mary J. Blige, Aretha Franklin, Aaliyah and so much more… Also love randomly listening to jazz funerals. And of course, classical music. For the obvious - Marilyn Manson, Nine Inch Nails.

What do you feel will separate you in your live performance from other artists?

Billy: Well, not to say that other artists don’t have this but we really hope to connect with the people on an existential level.. really take them through the show with us, kidnap them into our world. Both of our shows have always been very genuine and kind of visceral, so we hope the effect multiplies in this project.

What can you discuss involving the forthcoming album? Do the tracks revolve around a central theme?

Billy: I wrote these songs going through a pretty dark phase of my life. Obsessions, addictions, flashes of confusion and clarity. Sno’s been through her share of the same stuff at the same time, so that’s also what brought us together and made this album what it is. I think we’re both trying to say good-bye to certain things in our life with these songs and hopefully welcome new ones. To be honest, it’s a pretty dark record but with a light at the end of the tunnel. That light being for example the song “Choose your life”, which is kind of our personal anthem. It’s also the song that was supposed to be the only duet with Sno, before The Designs happened. That’s why we keep hashtagging it… it sums up a lot.

How do you feel the areas of management, public relations, labels and other business matters have changed for you now that you are a new entity? In other words, what’s your unified goal in these terms since the industry has changed a bit in recent years?

Sno: We just want to play, really… Do our thing, enjoy the process of expressing ourselves, creating something and then entertaining people with it… fame is not the goal here. It sounds easier than it is. Everyone involved in the band and the business partners have to be reliable and trustworthy in their areas. We hope and believe we have found that now with each other and with Music Gallery International as management.

Do you feel like you’ve ever written a song that perhaps came from such a place emotionally that you refused to release it or even so much as let someone else hear it?

Sno: No, not yet.. not that I wouldn’t feel uncomfortable with some of the stuff I’ve written, but I think it’s good to feel a little vulnerable and a bit stripped once you let people hear it. It adds to the catharsis.

Aside from the album, what further plans do you have for the forthcoming months into 2020?

Sno: We will mainly be focusing on the live band and the show now. Also have a lot more filming to do, designing merch, etc.

Billy: And also work on new music, just for us for now, to stay mentally healthy :)

Thank you everyone for your time and support! Our social media is pretty young, so if you like - follow us from the beginning - we will appreciate any likes, shares, comments..

MORE EPHEMEROL • An Interview With Los Angeles Synth Act MORE EPHEMEROL
JHNN • An Interview With Canadian DJ/Multi-Instrumentalist JHNN
COMMON EIDER, KING EIDER • ‘The Dreams Of Capitalism Are Being Revealed As Smoke And Mirrors...
DOUGLAS P. (DEATH IN JUNE) • 'Words/lyrics are continuously coming to me, everywhere and anywhere...'
ORDO ROSARIUS EQUILIBRIO • I never thought I’d live to see the day when Ordo Rosarius Equilibrio was mentioned next to Current 93 and Death in June.
AARON TURNER (SUMAC, ISIS, MAMIFFER...) • 'It’s like a dialogue between me and what I’m hearing...'
SYRENOMELIA • The drunk rural constable at the local pub.
DAVID SARDY • Producer David Sardy on his work with The Who, Oasis, Marilyn Manson and scoring work.
DEAD AGENT • An Interview With DEAD AGENT
IC 434 • find it amazing to live in a highly developed society and at the same time having to realize what a mentally mess it really is.