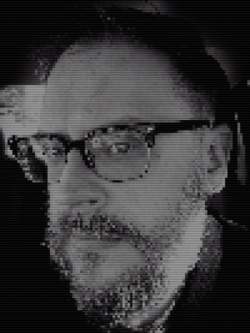 An Interview With DEAD AGENT

Ed Finkler has been making electronic music for 25 years – originally as machine rock project Cult of Jester in the mid-late 1990s. Since 1999, Finkler has created genre-mixing aggressive electronics as DEAD AGENT. DEAD AGENT was an instrumental side-project that became his main musical focus in 2009 with the release of Rehabilitation, a collection of tracks written in the previous 10 years. Finkler returned in 2014 with the Retina EP and 2016’s Fight Like A Robot. They return with 2019’s SGT_SLTR_MLN. We’d like to thank Dead Agent for the interview.

Can you give us a bit of a background on Dead Agent and the meaning behind the name?

Dead Agent is a project name I’ve been using for 20 years, all the way back to 1999. At the time it was for instrumental stuff I did on the side, outside of my old industrial rock project Cult of Jester. I became a lot less interested in doing COJ-type stuff, but liked writing instrumental pieces, so I’ve kept that name.

Back in the 90s when the Web was young, I read up a lot about Scientology. The Dead Agent doctrine is an approach to defending the Church of Scientology against critics by discrediting them, by any means. To “Dead Agent” someone is to destroy their reputation. Whether or not it is truthful is irrelevant. I find this both fascinating and abhorrent, which is certainly a theme throughout my work.

Your latest release is “SGT_SLTR_MLN.” What’s the idea behind the title?

It’s entirely based on Matt Wallace, aka “sgt_slaughtermelon,” the visual artist whom I collaborated with on the EP. My music is only half the project – the other half is his incredible static and video creations. The title is my take on it – his moniker as a file running on an old computer that doesn’t allow spaces in filenames. The music certainly exists on its own, as does his art, but they absolutely inform one another. If you purchase the album on Bandcamp, six high-resolution artworks are included, one for each song.

I don’t think it’s too out of line to say that your music sounds a bit influenced by video game music. Is this the case? If so, what have some of your favorite video game soundtracks been over the years?

Oh, for sure. The power of music is in the emotional associations we have, and I very clearly remember the sounds of arcades in the late 70s and 80s. At home, the Commodore 64 was our first computer, and the SID chip in that baby could produce otherworldly sounds that nothing else has ever matched. I love the distortion of low-bitrate aliasing, which anyone who ever played Wing Commander III on the PC with a SoundBlaster Pro sound card will recognize immediately. And I was a Sega Genesis (Mega Drive outside the US) guy, and was absolutely influenced by the music on that machine.

This is certainly not comprehensive, but four touchstone soundtracks from games that strongly influenced me would be:

Parallax, with music by Martin Galway. A tour-de-force of the SID chip. I listened to this for hours and hours while playing my (sadly pirated) copy of the game. The SID has this amazing detuned sound that can be so gorgeous in the hands of the right person.

Musha Aleste, with music by Toshiaki Sakoda. My favorite game on the Genesis, the soundtrack was just stunning. It’s basically speed metal played on the Genesis sound chips, so it is surprisingly aggressive and melodic. I’m a huge fan of melodic metal too, so this is right up my alley.

Streets of Rage 2, with music by Yuzo Koshiro. This is a well-known classic. What Koshiro squeezed out of the hardware was amazing. Definitely a 90s house/techno vibe to much of it that’s a little less present in my music, but incredibly influential on me nonetheless.

Mass Effect by Jack Wall. By this time (2007) music on consoles wasn’t restricted by hardware limitations, with full orchestral arrangements commonplace. But man, this is just an absolutely gorgeous, dark, synth-heavy soundtrack that predated the Synthwave/80s synth nostalgia wave.

There are lots of other things I could talk about, but these are some of the biggest ones for me.

Who do you cite as your main musical and non+musical influences?

It would be easy to go on and on, but I tend to focus on certain albums rather than a whole artist’s oeuvre. I’m old enough to still prefer listening to an album or EP and consider it a whole work, rather than individual songs. With Dead Agent, I bring the emotional impact I’ve felt hearing other music, and trying to recreate that for the listener. These are some of the musical influences that I think show up the most in Dead Agent:

Front Line Assembly – Flavour of the Weak and Artificial Soldier. How FLA balances all the shit going on in their songs and makes them sound so amazing is beyond me. When they bring breakbeats into the mix, all bets are off. It’s hard to understand how humans wrote these songs.

Ministry – The Land of Rape and Honey. Who doesn’t know this one? Certainly my favorite Ministry record. The percussion is unstoppable.

The Prodigy – Invaders Must Die and The Day Is My Enemy. Nothing makes me want to run through a wall more than these two albums. To paraphrase something I read once about the band: it’s a formula, but what a formula it is.

Metallica – Master of Puppets. Nowadays they call this the “progressive” period of Metallica. Back then it was just what they sounded like, and holy shit, these guys would take you on a journey. Sliding from the instrumental “Orion” to close out the album with “Damage Inc.” was absolutely majestic. Let’s just forget everything they did after 1989.

Beyond that, clearly there are things I reference and think about when writing Dead Agent material. I’m a programmer by trade, and the nature of computers and interacting with them is fascinating to me, especially machines like the Commodore 64 and the Amiga. That whole scene was a lot more fun before it became a Windows+Mac duopoly.

What do you think the mark of a good remix is from both perspectives of the artist and the remixer?

As a remixer, I try my best to take the elements of the existing song and apply my perspective to it. The choices I would make are often very different from the ones the original artist would make, but that’s why I’m remixing it – to find threads in the existing song and make something new with them. As the original artist, that’s exactly what I hope someone else will do with my work: take it and make completely different decisions with the source material. It’s very exciting, and the collaboration is inspiring for me.

You’ve been in the tech world for many years and have spoken at length regarding mental health in the tech industry. Could you expand on this and why it is so important to you?

I’ve wrestled with anxiety and depression for all of my life. It’s a chronic health condition for me, which I take medicine for and sometimes seek additional treatment. It’s always going to be something I had to deal with, in every aspect of my life. As a software developer, having a supportive workplace makes an enormous difference – I spend over half of my waking hours there!

In 2013, I started speaking at tech conferences about mental health in our industry. Between 2013 and 2017 I did about 50 presentations on the subject, all over the US. And in 2016 I founded Open Sourcing Mental Illness (OSMI), a non-profit, 501(c)(3) corporation dedicated to raising awareness, educating, and providing resources to support mental wellness in the tech and open source communities. Now I work with a team of volunteers to continue this work.

What I’ve found most essential is that we speak openly about mental health, and work to help each other understand the best ways to help ourselves and others. So many of us (about 20% of the US population at any given time) suffer with mental health disorders, and so few of us know how to help one another. We’re working to change that.

Your Bandcamp page makes reference to the Suprematism movement and Russian artist Kasimir Malevich. How does this relate to Dead Agent?

This really is about Matt Wallace’s work, which combine geometric abstraction with glitch techniques like pixel sorting. I am loathe to speak for Matt, so I’ll quote this from his Artist’s Statement: Malevich’s note that “planes reveal themselves” is always contradicted by the equally real limit of our ability to intuit them objectively. The role of thresholds between the rational and non-rational, pixel-selection, and chaos and order all play with the theme of the glory and failure of our attempt to understand the numinous.

You can read his full statement at the Bandcamp page for SGT_SLTR_MLN.

I read in your bio about how you and your collaborator were working on music to accompany visual arts. So my question to you is….if you had to create a soundtrack for any historical painting or photograph..what would it be and why?

I admit with some trepidation that I do not have a strong background in art history, and my knowledge of historical painters and photographers is lacking. That being said, I am a huge fan of the fine art photography of Chad Michael Ward, and the paintings of Zdzislaw Beksinski. I think it would be an exciting challenge to try to match their ability to evoke dark, cold, awful beauty.

What I really hope to do is to collaborate with more artists. My collaboration with Matt Wallace resulted in my best work as a musician. I’ve greatly enjoyed the remixing process in the past couple months, working with 5 different projects in that time. I already have plans to work with musicians I’ve admired for years, which is wonderful and exciting.

I also have SGT_SLTR_MLN remixes coming in from other artists, which I’ll likely release as singles and in a collection. And maybe I’ll find time in 2020 to write new music. I’d definitely like to do another EP before the year is over.

I really would like to say, as someone who was pretty active in the US industrial scene back in the mid and late 1990s, that I’m blown away by how helpful and supportive everyone is now. Back then, there was definitely a cooler-than-thou, competitive vibe going on in a lot of it. Maybe it’s just people growing up and understanding things a little better, but so many artists, fans, and journalists have been friendly and willing to help. It’s made getting back into everything a whole lot more enjoyable. I feel at home here.

IC 434 • find it amazing to live in a highly developed society and at the same time having to realize what a mentally mess it really is.
FIX8:SED8 • I Could Talk About The Wonder That Is Skinny Puppy For Hours
BROOK • I’ve soaked up a lot of musical genres over the years, and I like to think that maybe this is reflected throughout the Brook album.
DAVID GEDGE (THE WEDDING PRESENT) • 'I do like to make the song as personal as possible!'
CHRIS HASKETT (ROLLINS BAND) • 'Musicians are more like radios that occasionally pick up and reproduce things from the cosmos.'
EVA - X • An Interview With Synthpop Act EVA - X
ACCESSORY • ‘You Can’t Reach People Alone With Pictures Or Texts’
DEAD HIGH WIRE • ‘Dead High Wire Did Not Like To Be Categorized In One Box’
H.R. (THE BAD BRAINS) • 'I always wanted to play reggae!'
COLIN EDWIN (PORCUPINE TREE, O.R.K, METALLIC TASTE OF BLOOD,...) • 'I’ve always been keen to do everything live, as much as possible!'