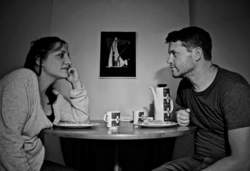 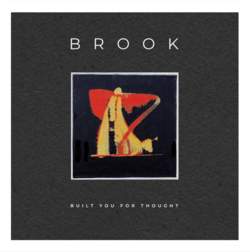 I’ve soaked up a lot of musical genres over the years, and I like to think that maybe this is reflected throughout the Brook album.

Let us introduce you to BROOK, the new signing to Vince Clarke`s VeryRecords label!

As long as the band Erasure is reportedly working on their new album, Vince Clarke signs a new artist on his VeryRecords label - which is a „a very small record label dedicated to releasing very fine electronic music” - and the name of this UK-based electronic duo is BROOK. Their album will be released on 20th September 2019.

‘Built You For Thought’, the debut album by new electronic duo Brook, combines the captivating vocals of Beth Brooks with a delicate, sensitive electronic palette from Howard Rider.

The ten highly personal songs on the album are delivered with an arresting power and a towering emotional resonance. Beth, a seasoned soul and blues vocalist from the UK’s Midlands has a technique unlike any other, capable of switching from quiet introspection to blistering urgency, sometimes within the same song. It’s an effect that can lead the listener to mistakenly think they are hearing a choir of many voices instead of just one.

The temptation would be for Howard’s music to follow Beth’s lead. After encouraging his brother to sell his Renault 5 to buy a drum machine when he was fifteen, Howard was weaned on a diet of dance music. Having previously released upbeat electronic music loaded with melodies, it would have been all too easy for Howard to put Beth’s vocal in a loud, similarly-intense setting. Instead, the music here is a conscious exercise in self-restraint: reflective passages and quietly turbulent, stirring juxtapositions, occasionally coalescing into sequences and arrangements laden with tension and robust rhythms, or nodding to the eclecticism of modern classical composition.

This interesting mix of music immediately captivated our colleague Janos Janurik and he contacted the artists to ask them some questions about their debut album. You can read the result here.

Howard, according to your personal data, you come from Chelmsford, Essex, where the legendary electro-punk industrial band Nitzer Ebb also comes from. They once said in an interview about their good contact with Depeche Mode that those who come from Essex have the same sense of humour and therefore easily understand each other. Is it true? Did that help you get in touch with Vince Clarke, too? By the way, how did you two get to know each other?

Howard Rider: I first met Vince 15 years ago when I started to work as his keyboard tech and have worked on all but one of his tours since. The only way is Essex... Ha, ha!

In the early years of electronic music (i. e. in the 70s) there were almost only instrumental musicians like Jean-Michel Jarre, Vangelis or Tangerine Dream. And of course Kraftwerk, who were the role models of the whole synth-pop generation. Their songs also had vocal parts, but they were rather produced with „robotic voices”. Since the early 80s, there has been a real boom of synthesizer bands who have shown the „soulful side” of this music style thanks to their fantastic singers like Midge Ure, Marc Almond, Philip Oakey, Andy McCluskey, Dave Gahan, Morten Harket or Andy Bell. And then we also have to talk about the bands that have shown that the female voices fit perfectly to this cool synthesizer sound too: Yazoo, Eurythmics and later Goldfrapp, La Roux or Reed & Caroline. Did they also influence you in the founding of your own band?

Howard Rider: I grew up on my dad’s record collection ranging from stuff from the 1960s through to the 1980s, and then I found myself getting into jungle music (drum & bass). I bought my first synth at the age of 15 and basically taught myself how to use a sequencer. I’ve soaked up a lot of musical genres over the years, and I like to think that maybe this is reflected throughout the Brook album.

Beth Brooks: I didn’t really get past the 1990s in regards to pop music, and spent most of my childhood listening to blues, soul and 1980s classics. I guess there are influences from a multiple of genres coming through on the album. I really think that this album is a fusion of myself and Howard’s musical influences, but obviously leans more towards the electronic side. However, I come from an acoustic and live music background, so who knows what our duo may sound like in the future!

So, I would describe your style as „emotional synth music”, because Beth's voice is so rousing and - just like with Yazoo, Eurythmics or Goldfrapp - immediately fills the whole room and captures your heart and soul. Although the musical basis is kept as simple as possible, there is a theatrical feeling with every track, as if you were listening to an unreleased soundtrack. The album took me to another world and released my deeply buried emotions - I think that would be the first aim of art. What stories, own emotions are hiding behind your songs?

BB: Some of the lyrics are taken from notes and journals of mine throughout the years, and all of the songs are based on my own experiences, which means they naturally have a very personal meaning. The majority are about men, mistakes and also about the time I spent living abroad when I was younger. I find that life experiences and also my day job as a nurse gives me plenty of inspiration for lyrics.

Beth's voice is clearly one of the best that I have heard and discovered in recent years. In some places it reminds me of Annie Lennox, then a little bit of Lana Del Rey or Laura Pergolizzi, but it`s still very unique. Did you have singers as role models and if so, then which ones?

BB: I liked to listen to really big voices. I would sing along with - and enjoyed the challenge of trying to keep up with! - the likes of Whitney Houston, Aretha Franklin, Annie Lennox and Dionne Warwick to name just a few. I’d often fail, but they were all essentially my unpaid singing teachers.

Your album will be the fifth release on VeryRecords. What do you think about the albums that have been released on this record label so far? Do you have contact with the other VeryRecords artists?

HR: I’m a fan of Orbital therefore I loved the ‘2square’ album that Vince did with Paul Hartnoll. In fact, I’m a fan of all of the acts on the label! I met Reed & Caroline last year when they were supporting Erasure in the States, and Reed also plays the cello on two of the album tracks (‘Rage’ and ‘Built You For Thought’).

If I were a program director at a radio station or a radio DJ, I would definitely play songs like „Prince”, „Built You For Thought”, „Diamond Days” or „Wasn`t Meant To Be” in the top rotation to reach as wide an audience as possible. Do you plan to perform the album live too? If so, when and where?

BB: Yes, we look forward to curating this for the stage but there are no dates as yet.

As an appetizer, you can watch a beautiful video clip of "Diamond Days" on YouTube. This is a very artistic video with graphic, painterly elements. Whose ideas were realized here, who was the director?

BB: The illustrations are from a piece of art by one of my uncles, Patrick Blower. He’s a cartoonist and the pictures were drawn on a smartphone. We were looking for some moving images and came across his live drawn art and decided to use them. I love the idea of all the faces being created and then disappearing. This ties in well with the subject of the song, which is about people moving in and out of your life. Howard cut it all together and added some of our own images.

And the usual ending question: To whom would you recommend and/or dedicate your album?

HR: Anyone with a love for electronic, classical and emotive music.

‘Built You For Thought’ is the product of two years of work. The tracks began with Beth recording alone with an acoustic guitar before Howard began wrapping her vocals in layers of intricate synths and textures to create the ten fragile pieces here. “While we were making the record, someone said to me that we should keep it simple,” says Howard. “If this had been a solo project I’d have probably made this all sound a lot crazier, but gradually I began to realize he was correct. What we needed was a lot of space for Beth to be the central focus of these songs.”

The result is a suite of songs that are deliberately and delicately understated, presented in such a way as to put Beth’s many voices and her individual outlook on life, society and relationships at the very heart of each song; songs that cannot help but leave a mark on you and which will stay with you long after ‘Built You For Thought’ has finished.

‘Built You For Thought’ will be released as a download, stream and CD.

05. Trying To Forget You

06. Built You For Thought

DAVID GEDGE (THE WEDDING PRESENT) • 'I do like to make the song as personal as possible!'
CHRIS HASKETT (ROLLINS BAND) • 'Musicians are more like radios that occasionally pick up and reproduce things from the cosmos.'
EVA - X • An Interview With Synthpop Act EVA - X
ACCESSORY • ‘You Can’t Reach People Alone With Pictures Or Texts’
DEAD HIGH WIRE • ‘Dead High Wire Did Not Like To Be Categorized In One Box’
H.R. (THE BAD BRAINS) • 'I always wanted to play reggae!'
COLIN EDWIN (PORCUPINE TREE, O.R.K, METALLIC TASTE OF BLOOD,...) • 'I’ve always been keen to do everything live, as much as possible!'
CHRIS CUTLER (HENRY COW) • 'We all shared a common concern with extending the vocabulary of rock...'
TREY GUNN (KING CRIMSON,TU ,SECURITY PROJECT,...) • 'I’m trying to set up an experiential thing...'
IAN EVERETT (SOLID BRONZE) • 'had a lot of time to sit with these songs...'