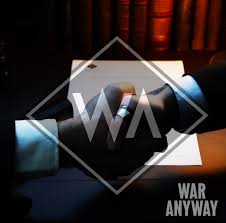 Standing out is important, and War Anyway understands how to do it! We really don’t know who is involved, but just as in a real war, the propaganda machine of this French duo is in top gear, and the two have an image you won’t forget that quickly!

War For Peace is their first EP on which you find five songs. They call their style industrial-martial, and we agree with that. Crossing The Rubicon is a superb combination of the EBM beats of Nitzer Ebb and the theatrical aspect of Laibach. A cheeky song with an incredible energy.

We Are The Army has a completely different style. A bit like Combichrist and Front Line Assembly, without forgetting the martial part.

War Anyway also can sound bombastic and loud. On The Rise Of A Tyrant they let the speakers thunder, but it remains melodic, and it sounds just as good as, say, Die Krupps.

After hearing War For Peace, we’re sure we’ll hear more from these guys in the future!