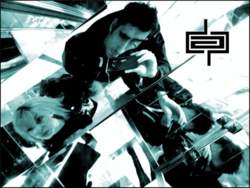 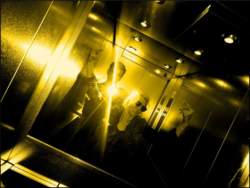 Hailing from the Northern part of France, Dead Astropilots has been set up by Rachel Biggs and Simon DAK. Their debut work “New Control” released in their homeland on Manic Depression Records took me by surprise. It’s a great vintage production mixing elements of dark-wave, electro-pop and post-punk. It’s an album that might appeal to lovers of The Cure, Poésie Noire, New Order etc. There’s a sweet harmony between cold electronics and guitar play. I got in touch with both protagonists to get more info about this promising debut.

How did this band with a crazy band name see the light of day and what were the musical ideas you wanted to exorcize?

At the very beginning, we wanted to escape the traditional ‘five persons rock band’ format and be able to play almost everywhere with minimal equipment. We also wanted to mix electronic and rock influences. We've always been part of the rock scene, but on the other hand, we were going to rave parties. So it was obvious for us to play with guitars and machines.

The name came from two very different mythologies. We decided to be as ‘Dead’ as the Kennedys and to be some sci-fi ‘Astropilots’ as well!

Your music is clearly reminiscent of the 80s and can be defined as post-punk, cold-wave, dark-pop… but what do these ‘labels’ mean to you and what are your main sources of inspiration?

First, we were born in the late 70s, so 80s music was the first genre to hit us as children. It's certainly an unconscious part of our aesthetics to include new-wave elements in our songs. Then, we live just near Belgium and England in the North of France. Way before the internet era, we saw the liberation of the radio waves in 1981, and spent hours listening to new musical forms like new-beat, techno, synth-pop, etc... coming from our neighbours!

So, being a post-punk or cold-wave or punk-wave band is not really important for us. Our music just expresses who we are and using a label is just a practical way to speak about our music to someone that doesn't know us. We are just lucky with this trend and the rebirth of that scene.

Tell us a bit more about the album “New Control”? What is it all about and how did the writing of the album happen? What have been the main difficulties and challenges?

We recorded “And Reach Palm Springs...” in 2012 and played it live for four or five years. This was a very indie-rock sounding LP, and we almost decided to play with a drummer and a bass player, which would have been a kind of failure in our creative process. Then, Simon broke his left hand and found himself unable to play any guitar for seven months. This has been a forced pause during which we had a deep reflection about what would be next for us.

So this time, we began writing the songs with only machines, thinking about minimalist punk bands like Suicide or The Normal. Then, we wrote the lyrics and added the guitars at the very end of the recording, going away from the traditional way to write songs with a regular instrument. This is one of the reasons why we called this album “New Control”.

According to you, what are the main aspects from the album you’re really proud of and are there other elements you would like to improve on further releases?

This album is telling a story. It's not a collection of songs placed one next to the other on a record. There's a ‘bright’ side and a ‘dark’ side featuring five songs each. It's not a concept album but it sounds very compact though, just like a very long song with ten parts.

We also included experimental elements in those compositions. It's the background of the album. We used different techniques like tape-music for instance and included concrete sounds to create subtle and unpredicted atmospheres within the songs. If you listen to them with headphones, you'll hear all this detail that you may not have paid attention to.

In the future, we would like to go further with this random experimental process. Sometimes, the music is already here, and you just have to catch it and trust it. We're trying to be like sound explorers to discover new territories.


Tell us a bit more about the lyrical content and how important are the lyrics (and maybe message behind the lyrics) for you?

We both studied literature in college and we're story tellers. Sci-fi and cyberpunk culture have always been very important for us. We grew up reading novels by William Gibson, Isaac Asimov, Frank Herbert, Philip K. Dick and it's definitely an influence in our lyrics. At the other hand, the ‘random process’ we use to make music is also very useful to write the lyrics. Brion Gysin and William Burroughs created the cut-up technique to write poetry. We are using it for our songs. One more time it gives us a way to reach unpredictability.

And sometimes, we just express feelings. No politics or big demonstration but something we want to share with others, to feel the echo in the audience.

“New Control” has been released as vinyl format. Is it all about nostalgia and do you expect more from a vinyl than a CD-release?

It was a very natural decision. We grew up listening to vinyl records. The CD format appeared when we already were teenagers and our music collection has always mixed K7, CD, vinyl and MP3 formats. We also were part of the rave scene back in the 90s and early 2000s, so for us, vinyl format has never really disappeared. There is no nostalgia in this choice. When Manic Depression Records signed us for this album, they asked us what would be the best for us, including the opportunity to release “New Control” on vinyl. We made it all white with beautiful photography by Séverine Delforge and mastered it especially for analogic format. One more time, there was a surprise in this process because the manufacture of the record itself has an influence on how it sounds. There is also something related to decay that we love with vinyl records. They are aging like us and we are very curious to see them in ten or twenty years, with all their time marks.

MICK HARVEY • Interview with Mick Harvey (The Boys Next Door, The Birthday Party, Crime & the City Solution, Nick Cave and the Bad Seeds, PJ Harvey)
SN-A • I Also Love Telling Stories Without Words
RAT SCABIES (EX THE DAMNED) • 'I never planned to make a solo record... It was something I was doing for fun.'
LIZARD SMILE • 'I still see it as the expression of appreciation par excellence to buy a physical album. It still remains more ‘real’ … one way or another.'
DANA COLLEY (VAPORS OF MORPHINE) • From the beginning to the last note
GROUND NERO • The derailed capitalist system has made luxury wage slaves of many people, in whom the hunger for luxury seems to have no limits.
CHRISTIAN DEATH • 'I think pacifism will be the rehearsal for the ultimate slaughter'
DISTRICT 13 • Many have a “life in chains”, each for themselves.[...] Many would like to be free, but they are trapped.
DANIEL B / PROTHESE • ‘I Don’t Want To Be Confined In A Genre That Creates Expectations And Borders’
THE LIVELONG JUNE • OUR AIM WAS TO PRODUCE SOMETHING THAT SOUNDED LIKE NOTHING ELSE THAT WE LISTENED TO