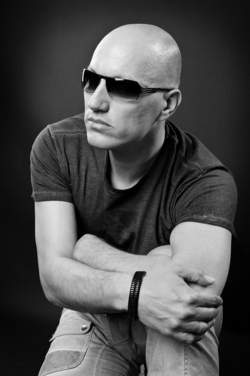 The letters SN-A stand for Sevren Ni-Arb a.k.a. André Schmechta. André entered into history as the creative mind and frontman of X Marks The Pedwalk. Back in the 90s he got involved with numerous other projects. One of them called Ringtailed Snorter was an ambient inspired production. André hasn’t lost his fascination for ambient music and set up SN-A. After a first full length entitled “Transmissions” released in 2013 on Infacted Recordings, we now get the second opus. “Distance” makes me think of a sonic astral voyage but still an intimate work.

SN-A reveals a different side of your creative mind, which is definitely more orientated around ambient electronics and soundtrack music. What have been the triggers and the goals to set up this project?

I’m an electronic music artist since 1988 and so there are a lot of ideas in my mind but still not enough time to create them all. But beside X MARKS THE PEDWALK – my main project – I also love telling stories without words and creating electronic soundscapes the listener can dive into. With my project SN-A I can give this idea a playground.

Tell us a bit more about the new opus “Distance” and what have been the main evolutions in sound, ideas and production from the previous album “Transmissions” to the new one?

“Transmissions” and “Distance” belong together in content but "Distance" is more like an album in story mode. It is designed as the prologue to "Transmissions". Basically "Transmissions" contains individual sound messages - received from space and time, and I have deliberately taken coded track titles but all have a specific reference to numbers from my life. While "Distance" tells the story of a departure - a journey into outer space, a journey that arises from an inner urge, also with threats and obstacles but also try to give outer space a wider meaning.

It is also a kind of a mental journey. The journey develops chronologically with each track - even if we only stop at individual times and locations. At the end of the journey we are far away from the starting point, the place of origin, also mentally. The traveler has not (yet) arrived at a specific destination. What about his feelings, his thoughts? Lost in a journey with no return? However, he now sends messages - these are the sound messages from "Transmissions".

What are the main differences working on SN-A and XMTP considering items such as equipment, recording, mixing and production but still your personal mood?

Working on music is basically the same with XMTP and SN-A but while I´m using more analog hardware synthesizers on XMTP I´m using a lot of software plugins for SN-A. And with SN-A I don´t need to think about vocal lines and lyrics. So I can only concentrate on the instrumental side.

Some passages from “Distance” seem to evoke electronic pioneers and I especially want to mention Jean-Michel Jarre. Do you feel related to the work of Jarre and/or other musicians? Do you have some references/examples when it comes to SN-A?

No I don´t feel related with any specific artist but I´m an 80s child; it was the time when e.g. Depeche Mode and the ‘Neue Deutsche Welle’ came up. I have never listened that much to Jean-Michel Jarre. Even though I like his work and he is an extraordinary electronic music artist in any way. Today I don´t have that much time to listen to music and I prefer to use my rare time to work in the studio instead of listening to music. So it is more a casual listening during cooking or talking with friends or listening to soundtracks while watching a movie. There are no references, just me and my gear to start creating my own electronic music worlds.

During the 90s you were involved with multiple projects and there was still an ambient one called Ringtailed Snorter. Compared to SN-A it was something darker and different but how do you look back on this early ‘ambient’ experience?

Yes, Ringtailed Snorter was darker compared to SN-A, like XMTP was in those earlier days but it was the same initial trigger to start that instrumental music project – creating new soundscapes, different to my other projects. I still like Ringtailed Snorter and there are some special memories.

Most musicians dream of composing soundtrack music for movies, documentaries, games etc… I can imagine it’s something you like as well but what are you really dreaming about and for which movie would you have liked to compose the music?

I love soundtracks. There are many fantastic scores by great composers. Sure I´m interested in producing soundtracks for movies but there are no preferences. It´s a question of story and dramaturgy.

RAT SCABIES (EX THE DAMNED) • 'I never planned to make a solo record... It was something I was doing for fun.'
LIZARD SMILE • 'I still see it as the expression of appreciation par excellence to buy a physical album. It still remains more ‘real’ … one way or another.'
DANA COLLEY (VAPORS OF MORPHINE) • From the beginning to the last note
GROUND NERO • The derailed capitalist system has made luxury wage slaves of many people, in whom the hunger for luxury seems to have no limits.
CHRISTIAN DEATH • 'I think pacifism will be the rehearsal for the ultimate slaughter'
DISTRICT 13 • Many have a “life in chains”, each for themselves.[...] Many would like to be free, but they are trapped.
DANIEL B / PROTHESE • ‘I Don’t Want To Be Confined In A Genre That Creates Expectations And Borders’
THE LIVELONG JUNE • OUR AIM WAS TO PRODUCE SOMETHING THAT SOUNDED LIKE NOTHING ELSE THAT WE LISTENED TO
LEAETHER STRIP • ‘MY BIGGEST HERO IS ALAN WILDER’
PARADOX OBSCUR • EVERY NEW ALBUM IS GETTING CLOSER TO THE FUTURE…