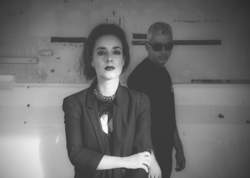 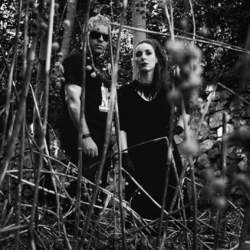 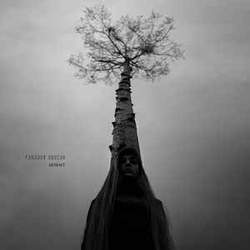 EVERY NEW ALBUM IS GETTING CLOSER TO THE FUTURE…

Paradox Obscur is a Greek duo featuring Kriistal Ann (still involved with Sine Silex and others) and Toxic Razor (Werkstatt Recordings label owner and involved with Beatbox Machinery, Metal Disco and others). Both artists were also involved with Resistance Of Independent Music. The newest work of Paradox Obscur entitled “Artifact” has been released on vinyl format on Young & Cold Records revealing a new minimal exploration of vintage electronics. Time for an interview with both artists.

Let’s start by asking you who’s hiding behind Paradox Obscur and what were the initial purposes (referring to sound, influences…) when you set up the band now four years ago?

Paradox Obscur is a path within the shadows of a crestfallen battlefield coughed to unveil the infinite light, without real purposes but just to bring pure gritty raw morbidity into a dying incorporated carcass… The sound is the vehicle to unfold the vigorous spells of eerie synth-scapes.

You both are still involved in multiple other projects – which all are more or less dealing with similar minimal-electronics and 80s influences, so what makes Paradox Obscur different to you?

Paradox Obscur consists of the influences-visions-dreams from both of us, unlike the solo-projects pointing to a vast lone walk, hanging afterwards like a profound vanity…

I already referred to the minimal and vintage electronic format of Paradox Obscur but what can you reveal about the global writing and production of the music and the equipment you’re using?

We record all music with hardware gear exclusively and perform all actions in real time mode, as we wish to capture a full crescendo of the human condition.

There are tracks flowing out of improvisations, sustained to build a weird task, a prolific storm of enormous resurgence.

The third album “Artifact” has been released for a few months now. What kind of album did you want to achieve and how would you compare “Artifact” with previous releases?

Right at the beginning of recording a new album, we are not entering into the process of thinking about what we would like to achieve. The common feature in our albums, perhaps in all the projects we are involved in, is that there will always be a diversity of songs. We are not one of those bands following a stereotypical line to create something similar or homogeneous. One reason is that we are easily bored of composing always the same and we do not follow the fashion moulds. Every new album is getting closer to the future…

I noticed you already released several ‘official’ video clips for Paradox Obscur. What’s the importance of releasing clips and what do you try to express in the clips?

Yes, we have three videos so far with tracks taken from the new album, which can also help to promote it. We want these videos to reflect the atmosphere and dynamics of the songs, adding vision in the scaffold of sound.

It’s quite interesting to see most of your work has been released on vinyl and even cassette format. Tell us a bit more about this aspect? Is it because of the vintage sound of your music or do you no longer believe in CD releases?

None of both; the issue of the format is not something which we designate anyway. The label that will take over is the one that will define the format of the music it will distributed, according to its purchasing public, perhaps according to the trends of time.

Whatever the form, our main concern is that our music can be discovered by the audience so it has to be easily accessible for the listeners. That's why we also have the digital distribution in all major digital platforms along with some physical copies.

FIRST AID 4 SOULS • Composing Songs Begins By Reading A Lot Of Books
PERSEPHONE • Maybe You Can Describe The Production Like A Puzzle: You Have To Find Each And Every Piece And Put It Together
ERIC BILITCH • 'I WOULD NEVER WANT TO MAKE A MOVIE FOR EVERYONE!'
WHISPERS IN THE SHADOW • 'I have no high hopes for humanity anymore...'
MARTYRIA • The Process Of Creating Our Music Is A Way Of Expressing This Spiritual Transformation
ELECTRO SYNTHETIC REBELLION (ESR) • ‘My Work Has Never Been Driven By The Trends Or The Dancefloor/Club Appeal’
WARM BODIES • Live - 27th of March - Antwerp Music City
SHEDIR • ‘I Always Think I’m Gonna Die Tomorrow’
BYSENSES • We are Just 'People', Not A Superrace
ADAM USI • You know, art, music and visuals are the package, they are one big thing, they belong to each other. I try to find the jigsaw pieces to paint a all in all picture.