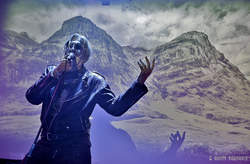 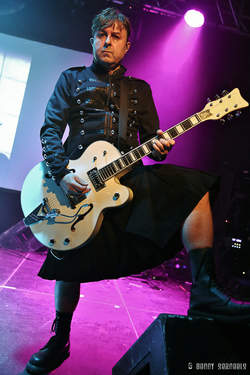 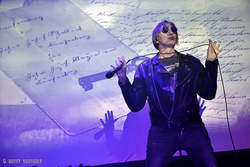 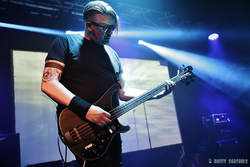 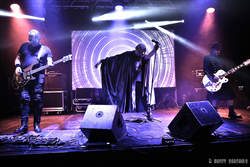 The derailed capitalist system has made luxury wage slaves of many people, in whom the hunger for luxury seems to have no limits.

Ground Nero has been able to become one of the best Belgian gothic rock groups in a short time. After their first EP BEYOND from 2016 they are now back with a second EP called SCALES, which contains four magical tracks. But where is that full-length record then? Dark Entries put on their bravest stance and asked the gentlemen themselves.

After the wonderful debut BEYOND you are now back with SCALES, a second EP. Two EP's in a row, is not that too much?

After BEYOND, we continued to work and soon we had a lot of new material ready but we thought it was too early for a full album. As the name implies, SCALES is a kind of "trade-off exercise" in which we explore and scan the quadrants within our genre, the cold / dark wave & gothic rock genres. We did that already with BEYOND but with SCALES we have gone a lot further, especially in terms of production. That is why we also chose 4 completely different songs.

Personally, I think that SCALES is very much a sequel to BEYOND but I know that you have worked hard on the arrangements and that there is additional electronic programming. Can I say that you have chosen to work in depth, more quality instead of quantity?

SCALES is a deliberate choice and it follows as a logical evolution on BEYOND but also as an intermediate step, one leading up to a full album. Indeed, compared to BEYOND, the arrangements are much more complex, which has also been translated into extra studio time. It has taken much longer than with BEYOND. That has also led to the songs sounding richer and fuller. In that sense we have indeed worked more on quality, rather than on quantity, and we will probably continue in that direction in the future.

Shall we take a look at the songs? 'Bannockburn' refers to the Battle of Bannockburn in 1314, a major victory of the Scots against the English. How did you come to that theme?

That is actually pure chance. Our guitarist, Nomad, was experimenting with new sounds. After listening to those sounds, we found that there were certain riffs, which looked very much like the sound of a bagpipes. We have worked on this and have made a "Scottish" song out of it, which sounded very militaristic because of the beat and from there to the Battle of Bannockburn, which today is mentioned frequently when it comes to the Scottish independence struggle, is but a small step. But in terms of content the song also has a double layer: in addition to the historical character, there is also the story of the "universal soldier" who is eventually confronted with his individual situation on the battlefield, and his choice, which he has or does not have...

'Parasites' is a very dark number. The title suggests that you have a hard time with people who 'parasitize'. What should I imagine?

Yes, despite the fact that some of our songs contain an autobiographical content, this song has a universal character too: everyone does have people in his or her environment who benefit from the goodwill of others: at work or in the family, friends, neighbours or in politics, you always meet them: people who think they are entitled to the goodness of others and who abuse it without any scruples.

'Plethora' is one of those songs where you have clearly made work of danceable programming. A conscious choice, I assume...

Indeed, the song has been developed from the beat and the associated programming. That is also one of those differences with BEYOND: the percussion and the arpeggiator synths that we have used on SCALES give the songs more vibes and power but on the other hand, and specifically in this case, more danceable.

We also hear a quote from Churchill in the song. That makes me curious about the theme of the song...

Yes, it is in fact about the "abundance (Plethora) of information" with which we are confronted on a daily basis, and which also manipulates us enormously in forming our opinions.

In the time of Churchill, there was the radio - or a TV for some people - as almost the only mass communication medium. It was only one voice that communicated to the masses. Today you have "multi-level" communication from everyone to everyone, including through social media and so on, which makes it very difficult for people today to develop a "consistent" opinion about something and to act accordingly. In that sense, the text of the song is also pretty ironic.

'Karoshi' closes the record. It is a Japanese term for dying from too much work. I don’t think that is a purely Japanese phenomenon anymore today. Many people break down because of the burnout epidemic. How do you see this problem evolve?

Yes, Karoshi is no longer an exclusive Japanese phenomenon but Japanese is the only language - as far as we know - that has a specific name for this. And that is very interesting from a linguistic point of view, in the sense that the language is a reflection of a society and a culture.

How do we think it will evolve? The derailed capitalist system has made luxury wage slaves of many people, in whom the hunger for luxury seems to have no limits. This extreme materialism makes people ill, because their dependence on that luxury is directly linked to the fact that they are not allowed to lose their work and have to earn more and more. That gives people so much stress at work that they get burn-outs. That will probably continue for a while and get worse, until people start to see that they do not need that mess and start to detach themselves from it. Some people need a burn-out to come to this insight and see that all those luxury products have no value at all.

You pay a lot of attention to the lyrics. Why are they not published?

Indeed, much attention is paid to the lyrics and they are now being published. They were not there yet at the first vinyl version of BEYOND but they were later on with the CD version. Future releases will also contain the lyrics.

You had a contract with Gothic Music Records to release the EP on CD but I now understand that this is not so certain anymore. Will there be a CD release or will it remain a digital publication?

That's right, there will be a release. We have a new record label, the German "Danse Macabre", known in the scene, and SCALES will be released on CD by them. That will happen sometime in the coming weeks.

And finally: when can we expect a complete record from you?

We are working hard now. It will be planned in consultation with Danse Macabre somewhere in the Spring of 2019, but a concrete release date is not yet fixed.

CHRISTIAN DEATH • 'I think pacifism will be the rehearsal for the ultimate slaughter'
DISTRICT 13 • Many have a “life in chains”, each for themselves.[...] Many would like to be free, but they are trapped.
DANIEL B / PROTHESE • ‘I Don’t Want To Be Confined In A Genre That Creates Expectations And Borders’
THE LIVELONG JUNE • OUR AIM WAS TO PRODUCE SOMETHING THAT SOUNDED LIKE NOTHING ELSE THAT WE LISTENED TO
LEAETHER STRIP • ‘MY BIGGEST HERO IS ALAN WILDER’
PARADOX OBSCUR • EVERY NEW ALBUM IS GETTING CLOSER TO THE FUTURE…
FIRST AID 4 SOULS • Composing Songs Begins By Reading A Lot Of Books
PERSEPHONE • Maybe You Can Describe The Production Like A Puzzle: You Have To Find Each And Every Piece And Put It Together
ERIC BILITCH • 'I WOULD NEVER WANT TO MAKE A MOVIE FOR EVERYONE!'
WHISPERS IN THE SHADOW • 'I have no high hopes for humanity anymore...'