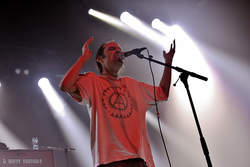 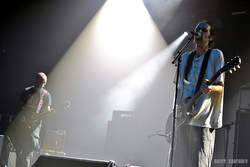 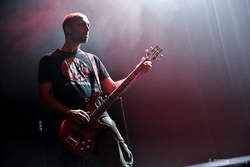 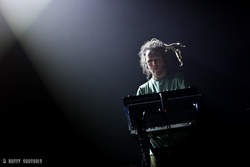 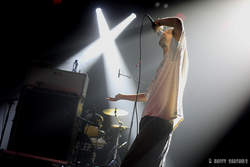 Donder, Hel & Hagel is the newest band of three veterans of the scene in and around Leuven, Belgium. The three band members have been making music since the 90s but this time they’re creating their most accessible music to date. Some might even call it good. In fact, during their first few concerts literally everybody did. The first question is of course obvious. What are the origins of that strange band name?

Hans Hagel (HH): We’ve been looking for a name for months and then, accidently, we’ve run into Captain Haddock and he shouted at us:”Donder, Hel & Hagel!!! Stelletje Zoetwaterpiraten!!!” (Thunder, Hell & Hail!!! You bunch of fresh water pirates!!!) Since that day everybody calls us “Donder, Hel & Hagel”

A new band but the people involved aren’t new. What urged you to digress from the more punky sound of your other projects and try a completely different, more electronic sound?

Hans Hagel: The urge to get a new band after the previous split-up. I want to make danceable music, but I do not want to repeat the ska-punk-dub I played before. I had never worked with synthesizers before, it seemed fun to try it and I do not regret it.

Anton Donder (AD): Same here, after playing ska-dub-punk for 14 years it was time to do something new to challenge myself. With my activist roots, the question how to undermine the current mainstream rightwing ideas and traditions is always there. Finding a new audience, while hopefully entertaining the old one as well.

Does this have any repercussions on your other bands, like Ulrikes Dream or Cop on Fire? Will these bands be pushed to the backseat while you try to promote DH&H?

HH: Playing in other bands gave me more live-experience, which helped Ulrikes Dream the past 20 year to become better every year. So I think most repercussions will be positive. We’ve all been active in different musical projects at the same time, so we think we can manage that.

What would you like to focus on most, live performances or sound recordings? Do you consider DH&H a real live band or more of a studio project?

HH: A bit of both. I love to work for hours writing and arranging songs but nothing beats a good live set. The feeling you get standing on a stage before a crowd that goes mental for your music, it’s addictive. The goal always was to come out with the music and play gigs, get people to dance, and inspire them to change the world.

It’s not easy for new and/or unknown bands to find opportunities to play. Your first shows all took place in Leuven, where you have the advantage of knowing a lot of people. How will you try to reach audiences outside of this provincial town?

HH: We’ve been asked to Gent, Peer, and Hengelo (NL), so people aren't only interested in Leuven or Belgium. We’re considering a booker but for now we’re sticking to the DIY-way. So we ask around, send demos … I want to concentrate on an album first, before looking intensely for gigs.

AD: It's harder with so much of the squat-scene, our natural habitat, succesfully torn down (not killed) by the right, yet when you provide some good protest songs, you can end up playing interesting places. I'm excited to play activist gatherings and demonstrations as much as playing street parties or “bigger” official-ish venues to people not yet exposed to something more radical-minded.

What can people expect from a DH&H concert? Do you emphasise perfect renditions of the songs or do you prefer to create a real live show that is more than just music?

HH: Rock ’n' roll with a drumcomputer, synths, a lot of bass and some guitar solos. When I’m performing my music I kind of explode. I think I’m a better live-performer than a studio-musician, though I like both.

So far, the band has only released one demo and even that only consisted of three songs. Are there any plans to release more material and, if so, when will this probably happen?

HH: We’ll start working on a first album in 2018. We’ve learned a lot during the demo-sessions. We want it to be good, so we’ll take time for it. The songs are ready but we’re still looking for the right sounds for each song.

All three of you are strong supporters of the DIY ethic. For a punk band like Ulrikes Dream this seems quite obvious but DH&H is a band with a predominantly electro sound. You could potentially reach quite a different audience. Will that affect your general attitude towards the music “industry”?

HH: The punks have already got the message, so it’s nice to reach out to other audiences too. If it ngs us to bigger venues or festivals, why not?

AD: I may shoot myself in the foot saying this but I never felt I had to behave better towards corporate music culture. When playing more mainstream events with past bands, it happened that the advertising banners of festival sponsors - especially banks and multinationals - got covered or torn down onstage. You can't ask for radical bands because it looks trendy and then expect them to put up with the conformism and consumer-mentality present on so many of those happenings. To me, if there are compromises, they'd have to be a win-win situation for the things I stand for, not for my ego or my wallet at the cost of being honest.

A lot of the electro bands reviewed or interviewed in Peek-a-boo share their social criticism with their audience, but DH&H is taking it a step further. Instead of general statements on the pitiful state of our civilisation, you write very direct lyrics that stimulate people to protest. Some newspapers even picked up your derisive rant on the incompetence of Joke Schauvliege, currently minister for the environment. Would you consider making less direct and less rude lyrics to reach a wider audience?

HH: I think we’re not rude at all in comparison to the powers that be. As long as injustice is law, resistance is our duty. If by any miracle next week the people of this planet send all the CEOs , governments, armies and rich assholes with a rocket to the moon and start to organize our world in an anarchist way, with respect for our planet and all its inhabitants, I might consider writing less direct and rude lyrics.

AD: I agree. Flemish people are often a bit hypocritical when it comes to openly voicing their opinions outside of “social” media. Less so when they happen to be on the winning side - in this case racism - but things are so bad right now, with so many warning signs akin to the rise of fascism in the '30s, that being polite is not an option. In fact, shouting at the sideline is the least we can do. And people have to start getting over the fact that you are allowed to swear and can still have a valid point. The classist justice system on the other hand forces people to defend themselves in near-Latin. Our message will be more inconvenient than that.

Last month, the band played the Breaking Barriers festival in Het Depot, Leuvens independent music centre. Was it an instructive experience for people who learned their trade in not impressively equipped squats or doesn’t it make it difference where you play?

HH: We’ll be happy to play there again one day, a good PA, super acoustics, nice lightshow, friendly and helpful crew. The stage felt like home, just as any stage, it doesn’t matter where you play, you always have to rock. Even if there are only three people attending the gig and the sound installation is shit.

AD: Some places can be horribly sterile, but Depot was very enjoyable. I've shared the stage with Christina Aguilera - even if it was just putting on yellow tape so she wouldn't fall off playbacking - but I value spirit no less then professionalism. A good mix is ideal. We've had rotten sound to a great atmosphere and the other way round.

As a band that’s still rather obscure, most gigs in the near future will probably be support slots for other acts. If you could choose one well-known band to open for, which one would it be?

To conclude, how can people contact Donder, Hel & Hagel?

LIVINGTOTEM • ‘INDUSTRIAL INFUSED ROMANTIC TECHNOID MUSIC’
MESH • Richard Silverthorn Of Mesh On “Gothic Meets Classic” And The “Live at Neues Gewandhaus Leipzig” Album
KMFDM • Sascha Konietzko Gives Us The Latest On KMFDM
NERVENBEISSER • ‘WE'RE DOING OUR THING AND WE'LL KEEP IT THAT WAY’
MILDREDA • 'It's is very nice feeling to let dark bombastic music hit an audience'
DER HIMMEL UBER BERLIN • ‘EVERYTHING IS FASCINATING IN DARKNESS’
SCANNER • ‘FAILURE IS ALSO AN ESSENTIAL PART OF ANY SUCCESS’
EUFORIC EXCISTENCE • Euforic Existence: We like to be put under the heading of EBM, but realize that we are an outsider. I would not want anything else.
GEORGIO 'THE DOVE' VALENTINO • 'Everything I've learned I know from records... (though I often misheard the words)'
EIRIKURA • 'Music can be an uniting and uplifting force and very much a redemptive one for all mankind'