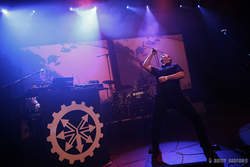 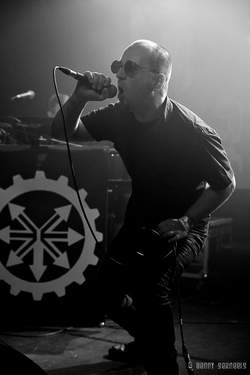 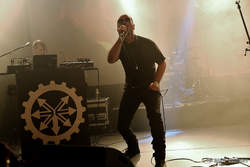 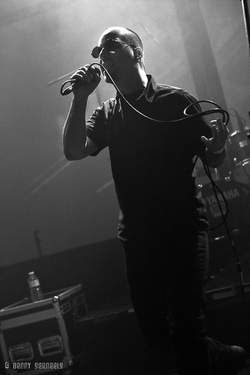 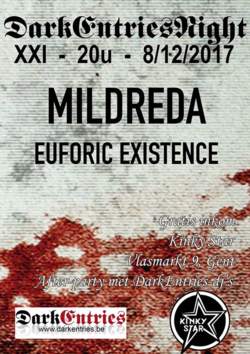 Euforic Existence: We like to be put under the heading of EBM, but realize that we are an outsider. I would not want anything else.

Euforic Existence will open for Mildreda on our 21st Dark Entries Night on 8th December. Euforic Existence is the project of Koen Van Dappernest - also known from KnK - assisted live by Bart Peeters. The project has been around for 17 years but after a long silence between 2003 and 2013, the project - which combines typical EBM sounds with structures from metal and industrial - is in very good shape. And the energetic performances are an important part in that. Koen told us all we needed to know in this interview.

Your latest CD 'MMXVI - IIIIII00000 - 2016' was, to say the least, well received at Dark Entries Magazine. Colleague Peter De Koning even wrote that you have never sounded so good. Do you also think so?

It is of course the intention to improve a bit every time, but we only know that we have succeeded when others say it, haha. We read the reviews and take every point of constructive criticism. It is the criticism of the same Peter De Koning who has moved us to use certain buttons slightly differently to previous releases. And of course experience usually leads to evolution in a positive sense.

EBM sounds to many like a retro genre from the 80s but you manage to update the sound by adding influences from industrial and especially metal but without using guitars. Is this the way that EBM needs to go to stay relevant?

EBM is very widely interpretable for some - including myself - and very limited for others. I do not discuss this and do not have an opinion about what others should or should not do. I am a music fanatic myself with a very broad view between the different genres and I grew up with a lot of influences. And everything that comes in to me, also comes out in my own version. Our sound spectrum is strictly EBM, but the structures of the songs go in all directions. We just do not like to make the same song twice.

We like to be put under the heading of EBM, but realise that we are outsiders. I've always been a rebel, so I would not want anything else, haha.

A question that I always ask myself with EBM, and that certainly applies to you: the music is meant to be danceable, so enjoyable but the lyrics are hopelessly pessimistic. Is this not a contradiction?

I have been thinking too much my whole life, and only by writing those lyrics can I put structure in the hopelessness, the worldly and philosophical disappointments in my head, and learn to accept it. Think of it as a kind of therapy. 90% of the texts are about personal experiences, world / universe views and hatred / feelings of love (some traumatic, others less bad). Everything that concerns me creeps into my lyrics. I think it's great when colleagues write about beer or a fat factory, but I'm not going to imitate that.

Most EBM sounds pretty nice, but with us everything is written in minor. A habit that I have never unlearned after my experiments with my Doom Metal project Cold Bleak Irrelevance.

Koen, you are also the man behind Fear The Light, the Antwerp organisation that promotes EBM. You have been working since the 90s and have undergone a major evolution, from many bands to just the nucleus: Euforic Existence, KnK (which you are also active in) and Slave Separation (the project by KnK singer Koenraad Vercammen). How did that go?

First of all, the name ‘Fear the Light’ was invented at the afterparty of the first performance of Euforic Existence in 2000 (not the 90s), where Slave Separation had also performed. At that time we had the plan with some of the artists present to organise several mini-festivals under that name. After a small setback and lack of coherence, this stopped and Koenraad Vercammen (K1) and I (K2) decided to set up the website with which we would then promote dark musicians without contract (it went much further than just EBM). We have then released and distributed some samplers with sponsor money and gifts (the third of which was added free of charge with a Dark Entries magazine in the paper age). Due to time pressure from my professional life and the gigantic expansion of my family, this has completely disappeared in the background at a certain moment. The site was reduced in 2010 to the promotion of K1's own music projects and myself, due to lack of time.

At the moment, ‘Fear the Light Underground productions’ is not much more than a brand. The brand symbolises the friendship and musical cooperation between Koenraad Vercammen (K1) and myself (K2) since 17 years, from which KNK was born in early 2015.

Sometimes I dream to set up great things under that name, but I still have my busy job, 6 children and 2 musical acts. It's enough.

Between 2000 and 2003 I was very active with 5 music projects, but as just mentioned, I had to give priority to career and family between 2003 and 2013. Euforic Existence hardly existed between 2003 and 2013. In 2013 I was present at WGT Leipzig at a performance by Orange Sector when my best friend came to ask if I would like to make such music again. I told him that I had no time for that, so he started talking to my wife. She then told me that I would better get rid of some frustrations (and those were there!). 6 months later, the CD 'MMXIII - IIIIIOIIIOI - 2013' was a fact. So I just needed a push from my two major partners. The difference between EE 2000 and EE 2013 is indeed very large: in 2000 I started experimenting with electronics without experience, in 2013 I already knew how everything worked. In 2000 I was only 21 years old and quickly satisfied with every sound that I made, in 2013 I worked on every song for weeks until it was completely what I wanted. The self-confidence of an average thirty-something is also much stronger than that of a 21-year-old, and that translates into stronger vocals.

As far as the texts are concerned: in 2000 I was a happy young lad with no responsibilities and in 2013 I had a busy job, 6 children and I had recently recovered from a painful family break (2010).

17 years is long. You have seen the scene evolve in those 17 years. What thoughts do you have about that?

In the early 2000s it struck me that the scene was dominated by techno influences, which I absolutely could not and did not want to play with. We then profiled ourselves as ‘Old school’ and Fear the Light was given the subtitle ‘Underground stubborn’. We did not fit in any picture, and had to do it with a sympathiser here and there.

It may sound strange, but between 2003 and 2013 I personally have not been present in the scene. My involvement was completely gone and absorbed by my career. The family break that I experienced in 2010 changed some of that, and in 2013 I really started to get back into the EBM scene. I saw many familiar old faces and what struck me very hard was that this techno-dominance almost completely disappeared. Everything seemed back, however. The very young people are now a bit on separate events (‘cybergoth’ and other new terms) and the ancients seem to be grouping together in an unadulterated old school scene. On the one hand I think that's okay, on the other hand I fear that this cannot last for 20 years... I see the difference between the past and the present, but unfortunately I did not see it evolve.

I would not know how to do it differently. I have a degree of autism and it’s very hard for me to work with others. I am glad that I have learned everything while by doing it myself, and I am aware that I can learn a lot more. That is the big advantage of doing everything yourself: you learn everything!

The involvement with my lyrics is very intense. Every word comes from the deepest caves of my soul. On stage, we want to convey the feeling we had when we first wrote a song. If you view a song as a kind of box, we put everything into it during the writing process. When a CD is played, that box is partly opened, but unfortunately not everything comes out. On the stage we try to tear open the box completely for the fullest possible experience of the content. Emotions are also clear in the stage mimics, and it is not fake.

Bart’s role in this is also very important. Although I do everything at home in the studio, I was still a layman in terms of live sound, stage material and technical knowledge in 2013. After all, studio and stage are two completely different worlds. Bart has shared a lot of his knowledge with me and is a very important pillar on which the live performance is based.

And yes, what is the greatest intention of performances? Have a nice evening and share this with as many people as possible, which in turn provides more performances. Creating unforgettable parties and getting to know wonderful people; get fans and make them friends.

20.01 @ The Rise Of The Belgian Empire (With A Split-Second, The Juggernauts, Pro-Patria, Stin Scatzor) @ Naumann's; Leipzig, D

GEORGIO 'THE DOVE' VALENTINO • 'Everything I've learned I know from records... (though I often misheard the words)'
EIRIKURA • 'Music can be an uniting and uplifting force and very much a redemptive one for all mankind'
GENE LOVES JEZEBEL • About their brand new album Dance Underwater and more...
STURM CAFE • ‘WE DO ENJOY THE 100% CONTROL BUT IT COMES WITH GREAT FINANCIAL RISKS’
SWEET WILLIAM • FOR ME MUSIC IS GOOD WHEN IT LEAVES YOU ROOM FOR YOUR OWN ILLUSIONS AND OF COURSE A CERTAIN DEPTH’
THE VIOLENT YOUTH • 'When you see that some chords that you have composed become a song, it's a very special feeling.'
BLANCMANGE • 'We were making experimental music for a while, really just for ourselves, not thinking anyone would want to listen.'
A SPLIT-SECOND • Marc Ickx talks about A Split-Second
KOL BELOV • I make strange animations, that look like music videos and strange music videos, that look like animation.
THE HORRORIST • 'Sometimes I cringe when I hear some of my songs about sex or pain but at the same time it’s my diary.'