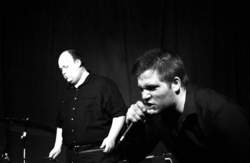 The Swedish EBM duo Sturm Café started releasing their first work in the early millennium years. They rapidly became a recognized and praised formation in the EBM genre. They this year strike back with a new- and self-released production, which is a mini-album entitled “Es Geht”. We got in touch with Gustav Jansson.


Sturm Café is slowly becoming a kind of ‘veteran’ band, which has already been active in the EBM scene for numerous years now. What are the first- and probably main things that come into mind when you look back to all that you’ve accomplished?

That people still think we are relevant after all this time. We have noticed an increase in interest of making covers of our songs, maybe because many of our songs are so simple but yet catchy. We see that as the ultimate tribute to our music legacy. We also brought a more playful, clever and melodic touch to the rather brutish Old-School EBM scene. Otherwise, we are just thankful that our music makes people and promotors bring us around the world to perform.

Your newest production “Es Geht” is a kind of mini-album featuring 6 tracks. What is the work all about and what are the main aspects you focused on?

When we make music we don´t have a grand idea, we just focus on recording whatever loops, samples or melodies that sound good and build tracks around that. “Es Geht” is a kind of continuation of the “Europa!” album; we use most of the same equipment and concepts. We would have preferred to change up the music and production even more but felt that the few songs we recorded were good and needed to be put out for the masses and the EP/Mini-album format was good for that goal.

The song “Traummann” reminds me of good-old New-Beat influences, which have been mixed with EBM. Is it something you recognise or is it pure coincidence?

It was not on purpose but we did listen a lot to New Beat and EBM during our youth which must be hidden away in our unconsciousness. The idea was very spontaneous; we sampled the vocals of an old song, still to this day, non-released and did a kind of techno-EBM remix of it. It´s like a club remix of a Sturm Café song that nobody has ever heard.

“Es Geht” has been released on CD and vinyl format, of course on digital format, but also on cassette! I get the impression that there’s a kind of ‘come-back’ for cassette releases, maybe as collector items. What does it evoke for you?

Cassettes are fun but we are not big collectors ourselves. We were asked by a friend who runs a label called Repartiseraren if he could release “Es Geht” on cassette when we told him that we were about to put out a new release. We thought it was a fun idea so we let him and the cassette sold out in day. We released a second edition of the cassette during the Summer and it was sold out in a a few hours too. We could never have imagined that the demand would be so high but we get the feeling the majority of the people keep it as a collector’s item more than actually listening to it.

Except a few productions that were released on Progress Productions, you mainly self-release your work. What does this ‘DIY’ approach mean for you and what does it say about your perception of labels?

Labels can be great and we had a good time on Progress Productions who supported us well. However, we temporally broke up the band in 2009 but when we did reunite again after the 6 month break things had to change and releasing our own music was part of that. It fits us well at the moment since we both have very demanding “day jobs”, with this concept we can work as fast or slow with the music as we want without having to think about a third party. We do enjoy the 100% control but it comes with great financial risks, luckily we do have a loyal following and sell out most of our releases.

You already did a few new live gigs and have a few more planned later on this year. What does performing mean to you and how do you see yourself as a live band?

It is the best way to connect with the people who enjoy our music. We love to hang out among the people before and after the gigs to chat, sign records, take photos or do whatever people want. It also brings us to places we would never have seen otherwise like small hidden towns in Europe, mega cities in Latin America or on a cruise ship in the Baltic Sea.

The on-stage performance in itself is always magical and we try our best no matter if we perform for 10 people or 1000 people. We also try to change the songs a little bit, like incorporate some acoustic drum elements to make it sound bit more powerful and dynamic while still retaining most of the original sound.

SWEET WILLIAM • FOR ME MUSIC IS GOOD WHEN IT LEAVES YOU ROOM FOR YOUR OWN ILLUSIONS AND OF COURSE A CERTAIN DEPTH’
THE VIOLENT YOUTH • 'When you see that some chords that you have composed become a song, it's a very special feeling.'
BLANCMANGE • 'We were making experimental music for a while, really just for ourselves, not thinking anyone would want to listen.'
A SPLIT-SECOND • Marc Ickx talks about A Split-Second
KOL BELOV • I make strange animations, that look like music videos and strange music videos, that look like animation.
THE HORRORIST • 'Sometimes I cringe when I hear some of my songs about sex or pain but at the same time it’s my diary.'
PARADE GROUND • 'We play with our figure as acrobats. We see the audience as instruments and love to play with them.'
SOL INVICTUS • Tony Wakeford Talks About Sol Invictus
NO MORE • 'We are preparing a mind blowing show of raw, pure Rock'n'Roll.'
THE WEATHERMEN • The inside story of how The Weathermen's big hit 'Poison' was made...