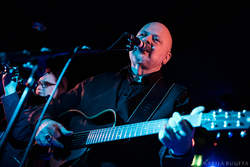 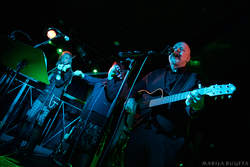 On 11th April Sol Invictus played at The Underworld in London, where they were accompanied by Of the Wand & the Moon and King Dude. After the show, I asked Tony Wakeford, the driving force behind the band, to kindly answer a few questions for us. I have been following Sol Invictus since my early 20s and at that time I was completely unaware that Tony had in fact started his music career in a punk band Crisis. Since the 70s, he's moved quite far from the punk genre. He was one of the founding members of Death in June and soon after parting from DIJ he started his band Sol Invictus. DIJ, Current93 and Sol Invictus are named the founders of the neo-folk genre. Over the years, Tony's been involved with many other projects, either as a main figure or a collaborator. However, his main project has always been Sol Invictus. After so many releases since the late 80s, Tony seems unstoppable. We will try to find out where Sol Invictus goes from here.

It's been a long time since your punk days in Crisis. Transition from the aggressive punk sound to acoustic music expression may not seem logical. What drew you towards the “neo-folk” genre? How and when did it all start for you?

Tony: Well my instrument had always been bass in both Crisis and DIJ but I thought with Sol I would try guitar and I went into town one day and picked up an acoustic just to see if I would be any good and I didn't want to buy an amp if I was not any good. I wasn't any good as is now obvious but hey I paid £50 for a guitar. It was silly to waste it.

You have worked with various musicians under the name of Sol Invictus. How did the collaborations with some of the members start? Who is in the current Sol Invictus line up?

Tony: Eilish violin, flute, and Guinness. Lesley drums but she is a girl so it's called percussion and Caroline bass and Lesbian boots. On the whole it's been friends, friends of friends, and Matt Howden.

During your career, you have collaborated with other bands and projects. Do you find collaborations with other people's projects as inspiring and rewarding as doing your own music? What are your experiences?

Tony: A real mixture, from lifelong friendships to vermin you would be happy to see ripped apart by wolves.

I have listened to some of your solo work releases. What do you wish to express with your solo work that you couldn't put into Sol Invictus work? Why did you feel the need to separate the two projects?

Tony: A lot of it was that I was advised not to put too much stuff out as Sol. Looking back it was bad advice as both Into The Woods and Cupid & Death are really Sol albums but just didn't sell as well because none of the other stuff does. Now almost anything I write now will come out under the Sol name. Apart from Owls and Twa Corbies but as they only do anything every 10 years it's not a major drain on my vast talent.

You founded your own Tursa records in 1990 which, if I'm not mistaken, is not as active anymore. You've released both Sol Invictus and other artists through Tursa. In your experience, how is it to run your own record label? Do you find it's easier to put your music out on your own than finding a suitable record label?

Tony: It no longer exists. Certainly not to release other artists, anyway. It's less stressful just to burn money. In the end I couldn't really offer anything more than anyone not in a coma could do themselves and even someone of my low morals couldn't justify gouging a % out of it. If you can't find a proper label like the ruthless Teutonic automatons at Prophecy you may as well do it yourself.

Sol Invictus music can be described with various terms, such as neo-folk or apopcalyptic-folk. On your Facebook page you state that Sol Invictus plays prog-folk. Sometimes I get confused by the labelling. What do these terms represent? What elements or musical influences have you incorporated in your musical expression?

Tony: It doesn't really mean anything. People like labels. I prefer Jazz Skiffle but it never really caught on.

In your lyrics, you talk about the world, the society, values, beliefs, spiritual nature of life and all that should concern us as human beings living on this planet. However, we can find some more personal subjects as well. Has the inspiration changed during the years and if yes, how? What do you like to focus on when writing lyrics?

Tony: It's more therapy then inspiration. My lyrics are much more personal then polemical.

Your last album, Once Upon A Time, is a rather big step from the previous, more acoustic albums. You flirt with rock influences and psychedelia, which combine pretty well with Sol Invictus sound tradition. Can we expect Sol Invictus to continue in this direction or you'd rather keep all the options open?

Tony: All options are open. The next one has piano and a choir.

What era in the music history do you find most inspiring? What genres and music styles do you personally like?

Tony: I listen to anything as long as it's King Crimson.

Prophecy Productions re-issued old Sol Invictus releases. How did that come about?

Tony: They offered me a shit load of money and I said yes.

Cupid & Death was originally released in 1996 under Tony Wakeford. Why did you decide to re-release it later in 2012 under Sol Invictus name?

Tony: Because it was seen as a bad thing to release too much stuff. To all intents it was a sol album.

You played in USA, UK and the rest of Europe, probably also in some places that I'm not even aware of. Where do you feel most at home besides UK when it comes to playing live? To what extent do the audiences in different countries differ?

Tony: Well I feel more at home in continental Europe to be honest. The UK is now way down the list. I have always considered myself a patriot but I now loathe this country and would quite happily watch a worryingly high % of its moronic Express reading Brexit knuckle draggers fed into a wood chipper. If I wasn't too thick to speak the language I'd bugger of to Krautland tomorrow.

You played various festivals and solo shows. How do you feel about playing festivals before larger audience as opposed to more intimate club solo shows with a full set possibility?

Tony: On the whole I enjoy festivals. We just played one in Leipzig and had an amazing reaction. Short sets are good.

Recently you played in London together with Of the Wand & the Moon and King Dude. Each band we saw that night gave an amazing performance. It was indeed a special event, that will surely be remembered by everyone present. How did you guys come together for this special occasion? How was the whole experience for you?

Tony: A promotor came up with the idea so the credit should go to him. I think it shows the cultural sea change in the last few years that two drunk men can make love on stage while we play 'Lucifer before Sunrise' and not get arrested.

During your London show we could hear the selection of your 90s material and some new millennium material. We could hear songs from Lex Talionis, Death of the West, In the Rain, The Devil's Steed and The Cruellest Month. The last track you played was “Lucifer Before Sunrise” during which you were joined on stage by Kim Larsen and Thomas Cowgill. The set list was a successful choice of songs. How do you chose songs for your set lists? What is your criteria?

Tony: Anything that I can remember which is worryingly less and less.

You played Fire & Sun festival in Leipzig on 24 June. How would you describe that festival? Tell us about your experience.

Tony: It was great. Even warm beer couldn't ruin it. It was a lovely place to play and an amazing audience. Leipzig is a great city.

What are you currently working on? Can we expect a new release from Sol Invictus any time soon?

Tony: We have recorded, mixed and mastered a new album but it is very artwork intensive so that is taking time but it will be ready late this year or early next, I hope.

Since the early days of neofolk “scene” with Death in June, Current 93 and Sol Invictus, there have been a lot of bands who followed in your footsteps. I like to think every band is unique and that every artist brings something new to the table. With all your experience, what do you think would be the recipe for “staying in the race”, being recognisable and successful?

Tony: Well I think that is wishful thinking, to be honest. The ones I consider successful are those that transcend the genre, nod in its general direction but move on. One Sol, Current or DIJ is enough. More than enough some might say.

NO MORE • 'We are preparing a mind blowing show of raw, pure Rock'n'Roll.'
THE WEATHERMEN • The inside story of how The Weathermen's big hit 'Poison' was made...
MARTYR WHORE • ''as a lady orgasm multiply times by 100000000000000'. This night was a big surprise cause we were not programmed in the line up in Madrid'
VERSUS • ‘TO PRODUCE A COMMERCIAL ALBUM WAS NEVER OUR INTENTION’
MASQUERADE • It's too difficult as it is to tour these days when people prefer to stay at home and watch videos from the 80's on YouTube
THE QUINSY • Each concert is unique. But we are famous for our powerful gigs
GOTTERDAMMERUNG • Rose gardens are beautiful but they die too…you might as well dance in that garden during the last night.
ELM • 'ELM brings you... Electronic Lust Music.... or whatever better acronym anyone can come up with'
JEN CLOHER • Jen Cloher, the Australian version of Patti Smith, about privileges, jealousy and the Australian feminist underground music scene
BLACK LINE • BLACK LINE, the music collective leading LA’s EBM revolution