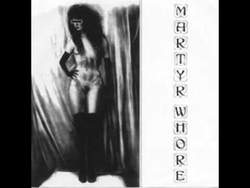 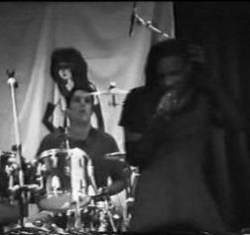 Martyr Whore is a French goth / post-punkband and they saw the light as a band in the mid 90s. Playing deathrock a la Christian Death's original style.
In 1995 they released an album entitled "Roseydolvelt Ballet" on Germany´s Apollyon label, home of bands like The Last Dance, Engelsstaub, Ikon and Madre Del Vizio. A second album was planned to be released in 1996 but that never happened. Then, in 2002, they put out a self-released album with the 1996 original recordings entitled "The Blue Coresh Nietzsche Malsaine". In 2017 they released the album “SS SATAN” as a limited edition.

Catch them while you can live in Poland at Return To The Batcave Festival 2017. A line up with many other good bands, classics and newer bands.

How did you came up with the name Martyr Whore?

We wanted to create an anti-sect, anti-christianity band when we listened to Christian Death's "only theatre of pain" the first time. We wanted a virgin art without christianity value. Martyr and his opposite whore (we used to listen to the first album of Hole, Teenage Whore)

What are your songs about and do you hold back things you would like to scream out or you just go for it?

In the 90s, the first album's songs were about delirium tremens and death of reality, death of appearences. Edgar Poe's delirium tremens Ligeia necrophily romance. God is dead, I am crying my dead god. Nihilism, no future in this way. The second album, The Blue Koresh Nietzsche Malsaine's songs were about David Koresh and his sect in Waco. The Manson family (Susan on Blair) apocalypse 19. Gitane Monroe Nietzsche's law against christianity.

Have you ever been in other bands before?

Which kind of music do you like more? Any guilty pleasures you want to share with us?

I play guitar and bass. I wish I could play the harp.

How is the atmosphere in France for a band like yours to perform your show?

Impossible. In France deathrock does not exist. So we don't even try to perform in France. Metal rules in France, too many superficial batcave bands production made metal the king of France. Also rap music got his crown, techno, electro and graphist band.

Anytime while I make love...

Vinyl is the best, cassette why not ? CDs yeah.

People that don't know Deathrock, Goth or Punk are kind of scared of it or have a weird vision of it, how do you think they come to such a way of thinking?

Christian Death's only theatre of pain. It’s a shame there are no music video. Shadow Project.

Any artists who you would like to collaborate with for the cover of your music album?

How is it going on stage and what was the most memorable night and why?

Any band who offer us to share a big tour with a lot of dates and we sign immediately with them.

Deathrock in Brazil is ok, Spain, Italy, California, Los Angeles sure. Big audience, in the hell of a fest or in a club, why not?

What are your personal thoughts on our subculture these days? What would you like to see differently or do you prefer that it stays as it is?

Subculture with new media as facebook, myspace, youtube ???? Graphic designers still rules as commercial sport music, it’s good and bad for the war inside subculture. MTV is dead. People in France do not want to hear about culture as Hanns Johst in Schlageter. They like their job and distraction and the way they sleep. I do not want change. When I see a stupid guy or a stupid girl I hope he or she is gonna be more stupid or more human.

My most beautiful dream, I watched Nietzsche dancing. My worst nightmare, Lyon a French city….no music…no art….just cash and convictions rules…..as in a colony.

No sorry, no dancing shadows but sleepwalkers, walking on Rozz his voices….have to talk to my doctor called Nietzsche.

VERSUS • ‘TO PRODUCE A COMMERCIAL ALBUM WAS NEVER OUR INTENTION’
MASQUERADE • It's too difficult as it is to tour these days when people prefer to stay at home and watch videos from the 80's on YouTube
THE QUINSY • Each concert is unique. But we are famous for our powerful gigs
GOTTERDAMMERUNG • Rose gardens are beautiful but they die too…you might as well dance in that garden during the last night.
ELM • 'ELM brings you... Electronic Lust Music.... or whatever better acronym anyone can come up with'
JEN CLOHER • Jen Cloher, the Australian version of Patti Smith, about privileges, jealousy and the Australian feminist underground music scene
BLACK LINE • BLACK LINE, the music collective leading LA’s EBM revolution
VIRGIN IN VEIL • A nipple, or a racist politician? What’s more dangerous? Sex, or war?
THE BREATH OF LIFE • 'A True Watchmaker work'
DICEPEOPLE • 'Electro with an Industrial/Gothic edge and broad range of other influences'