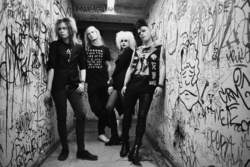 A nipple, or a racist politician? What’s more dangerous? Sex, or war?

Virgin in Veil released its first demo two months after the band came to life and started playing gigs in Finland as well as in nearby countries. A few months later, the band published a 4-song e.p. titled “The Glory Hole“. Initially self-released on CD and quickly out of print, a 7” vinyl version of the record was subsequently released by Finnish label Fairy Dust Records in May 2016.

After countless gigs in Europe, Russia, USA and Mexico, the four musicians were offered a record deal by Danse Macabre Records. “Deviances“, the band’s debut album, was released by the label in October 2016. Many more live performances followed, including a packed show at Wave Gotik Treffen 2017. Virgin in Veil’s sophomore album is scheduled for released in Autumn 2017.

Virgin in Veil’s mix of catchy decadent melodies and fast beats – as well at its members’ debauched behavior on and outside of the stage – have granted the band to be acknowledged as one of the most interesting deathrock bands of its generation.

How did you came up with the name Virgin in Veil?

Jacques: I wanted a name no-one used before, which had a certain dose of mystery in it so everyone could make their own interpretation.

Which bands or artist has affected you the most so far?

Jacques: There are the obvious influences, bands like Christian Death, Cinema Strange's 1st album, Tragic Black, Bauhaus, etc. But we have also been very influenced by other genres and artists, sometimes very unexpected. All of us are listening to a wide selection of music... William has a lot of influences coming from a more “classic rock” background. Suzi is eclectic as fuck, always listening to different stuff and loving to discover new artists. Myself, I have a very “goth/punk” background but I also love to listen to totally unrelated artists, for example a lot of rap influences the way I craft my lyrics and the way I perform as a vocalist. And these days I listen to a shitload of 81/83 era Ministry.

Jacques: On the first album, the lyrics revolve primarily around sex and debauchery, with a reflection on the fact that people tend to see sexuality much more negatively than they see violence. For example, on Facebook you can't post a picture depicting a woman's nipple but people like Donald Trump or Bart de Wever have their own pages and spread their right-wing shit around without any kind of censorship. So I'm asking you, what's more offensive? A nipple or a racist politician? What's more dangerous? Sex or war? I tend to be brutally honest, I'm not the introverted type, so I most generally speak my mind. There are of course many topics I'd like to explore lyrically, and there are already many different subjects covered in our upcoming album.

Can you tell us about the bands you were in before?

Jacques: I've been in a myriad of bands when I was a teen. After, there was Sleeping Children from 2003 to 2006. We played a few times in Belgium, maybe you were in the audience? Then there was Secular Plague which was way much more punk-oriented.

Would you like to start another band or project alone? In which genre if so?

Jacques: I don't. I'm fulfilled with Virgin in Veil, and I also play in Masquerade where I'm as well writing songs, so it's enough work already. I'd rather concentrate on 2 projects and do things seriously, rather than playing in a lot of bands without having the time and energy to dedicate to them properly.

Jacques: It depends but I'd say dusk is my favorite time to make music. I'm kind of crepuscular, like our kitty. This is by far the moment of the day where I'm more alert and artistically inspired.

Jacques: Absolutely. We just finished the mixing and mastering yesterday actually and the album is now in the post-production phase by our label Danse Macabre. It will soon be at the pressing plant, so I think you can expect it around October, more or less one year after our debut album “Deviances” came out. The album is named “Twisted Thrills” and contains ten songs, including “Of Tears and Poisons” for which we released a new music video last month. We've been working really hard on this album, in terms of songwriting and production. You'll find the “classic deathrock” sound we used on “Deviances”, but also a few surprises since this album is way more diverse than the first opus was.

If it was up to you would you like to release music on cds, vinyl or cassette and why?

Jacques: CDs and digital are the best. Vinyl looks awesome but they are expensive to make, expensive to ship and it's a nightmare to carry them on tour. We favour the CD format because it allows us to sell our albums way cheaper. Being accessible to more or less everyone matters to us more than the current vinyl trend, to be honest. But if a label wants to press vinyls of our stuff, we'd gladly do it. It's just not a priority.

People who don't know Deathrock, Goth or Punk are kind of scared of it, how do you think they come to such a way of thinking?

Jacques: People are always scared of what they don't know. It's ignorance, and it's sadly a part of human nature. But to answer your question, I think people are uncomfortable seeing individuals who are ostensibly different because it acts like a mirror and brutally shows them that they are just sheep following the trends and fitting society's mould.

Jacques: If I was to work with a famous director, I'd love to pick someone who has nothing to do with the goth scene. Maybe Spike Lee. His work on that old Public Enemy vid was awesome. It would be very interesting to work with someone totally unaware of those music codes and cliches and see where it goes. We love to break codes anyways, so I suppose it would bring a very interesting result.

How was touring so far and what was the most memorable night and why?

Jacques: Touring is always fun and most of the time pretty out of control, although I have to admit we have kinda slowed down on the debauchery lately. The most memorable night? Well, amongst the recent ones, I'd say our gig at the Wave Gotik Treffen was super intense. The venue was completely packed, the sound was loud and the atmosphere was hot. We had no merch table, we just sold our fucking CDs by going in the crowd after the show. We chatted with people, had pictures taken with them... It was cool and I think they were happy to actually get to meet the band instead of buying merch from a goddamn table.

In which country would you like to play when you are on tour again and do you prefer to play for a small audience or big audience and festivals or in a club?

Jacques: I'd love to play where most bands don't go. There are goth/deathrock scenes in China, Taiwan, Angola, Kenya and so on. I'd love to visit those countries, whatever, if we only play a in a small club or squat. That'd be a very interesting experience. I generally prefer small, packed, ultra-hot clubs. I love to have the audience super close to us when we play... You know, Virgin in Veil on stage is all about energy and intensity, so I think it fits more a dark cave or a squat than a shitty hipster venue where people can't smoke inside.

Jacques: As I just said, I'm glad to see that goth and deathrock scenes are emerging in many new countries, that goth/deathrock is becoming more widely available and accessible.

Jacques: Only when I'm drunk.

THE BREATH OF LIFE • 'A True Watchmaker work'
DICEPEOPLE • 'Electro with an Industrial/Gothic edge and broad range of other influences'
THE MESCALINE BABIES • 'I love Christian death, but their first album is nearly 40 years old, we should try to evolve the concept.'
SEEMING • I'm trying to paint a world where humans are not the stars or the narrators—where it's not about us at all.
LIQUID TRAUMA • OUR MEMORIES OF A BETTER PAST ARE OFTEN FAKE
DEAD BORN BABIES • 'They are about the livings who spoke us out. We adapted all the haunted and horror idioms to make them synonyms of “politicians”, “Global corporations”, “society “'
ELENA ALICE FOSSI (KIRLIAN CAMERA / SPECTRA*PARIS) • I can in total freedom listen to Joy Division, SPK, Muse and Britney Spears...
NYTT LAND • ‘OUR MAIN SOURCES OF INSPIRATION ARE THE SIBERIAN NATURE’
LIFELESS PAST • In October 2017 we are going on our first international tour.
CLAN OF XYMOX • ‘THE SONGS DICTATE ME INSTEAD OF ME DICTATING THE SONGS’

Other reviews from VIRGIN IN VEIL
VIRGIN IN VEIL • With those covers, we wanted to make people ask themselves why they are more shocked by seeing tits, cunts or cocks than seeing images of war and messages of hate