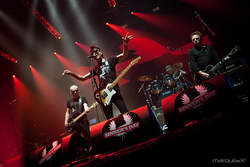 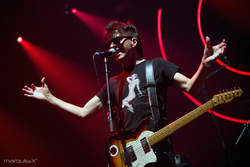 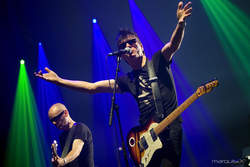 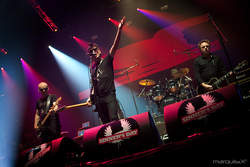 About their brand new album Dance Underwater and more...

On a gorgeous fall day in London, strolling through Kensington Gardens, Peek A Boo Music Magazine recently caught up with Gene Loves Jezebel founder Jay Aston, to discuss their beautiful new album Dance Underwater, released on CD in June 2017 and on vinyl in late September. We had some questions, and Jay had some answers.

Upon approximately seven listens, to my sensibilities the stand out songs are "IZITME", "Flying (The Beautiful Blue)", and "World Gone Crazy", which recently appeared for two months on an alternative chart in the USA (congratulations). What comes to mind when I mention those songs, and secondly, besides the first single from the album "Summertime", what song(s) to you feel could be the second single from the album?

Well all the songs mean something to me. "IZITME" was the last song selected for the album. I wrote it, & "Flying (The Beautiful Blue)", a long time ago in Atlanta, Georgia (USA). My life had fallen apart & these were the kind of songs I wrote as a result of the turmoil. I remember thinking that “Flying” had a very unusual & long high vocal going through it, which pleased me. I liked my riffs too, but Peter Walsh decided not to use them. Producers have to have the last say, otherwise nothing would get done!

The spelling of "IZITME", and “Cry 4 U”, is a deliberate homage to Slade’s incredible recordings in the early 1970s. I’d written a song called "Palestine" which didn’t fit the vibe of the album, so we all sat round in a circle & I played songs I had on my iPhone. Everyone loved that, that’s how it made it. It might never have seen the light of day otherwise.

I would love to hear "Palestine" one day, perhaps at a future solo gig! "How Do You Say Goodbye (To Someone You Love)" is a beautiful song and sentiment. James' guitar is stellar on this track, and I really appreciate what Tony Visconti has brought to it. How did he (Tony) get involved? And if not too personal, the lyrics are sad and yet beautiful, who or what are they about?

Tony heard the song through James’s involvement with “Holy Holy.” He loved the song & wanted to do the string arrangement. He’s obviously a massively important influence on us (especially James & I). The lyrics are about complete & utter devastation after great personal loss.

I'm sorry, and won't delve deeper into that. So then, let's get down to the nitty-gritty, with perhaps an uncomfortable question: Opening track "Charmed Life (Never Give In)". I really think it is a great song, but I'm not loving the vocoder used in some parts. An unusual element for Gene Loves Jezebel, to be sure. How did this come about, and how to you feel about it?

Often when I write, I drown my vocal in effects. I find it can help me twist odd lyrical & vocal angles out of a piece of music. Peter Walsh & the band all liked this in its raw form & kept it. I sang the record & left the rest to the boys.

During the actual recording of Dance Underwater, were all four members (James Stevenson, Peter Rizzo, Chris Bell, and yourself obviously) in the studio together, or were each of your parts recorded separately, in different parts of the world?

Of course not! Our strength is being together. That’s what makes us the real thing & it’s also why the album was expensive to make (but nothing compared to our budgets when there was a music industry!).

Were any of the songs conceived in the studio, or were they all pretty much written by the time it came to record?

“Cry 4 U” had a chorus that Peter Rizzo wrote. I wrote the rest in the early hours. I found the new music created in the studio was great to bounce off. There were lots of tweaks to all the songs. The lyrics & vocal melody to “Charmed Life” was 90% written in the studio. “Flying” was almost an instrumental.

Besides the album's producer, Peter Walsh, who in the band has the most interaction / authority in the final edit of this collection of songs?

I’d have to say Peter Rizzo. He came up with a lot, but James was very important too. He chose many of the songs & added so much. Peter Walsh was of course... huge!

When I first discovered Gene Loves Jezebel, in the states during the 80s, your earlier albums could have been categorised as "art rock", "indie rock", or even "goth" to some degree. With House of Dolls and beyond, including 2017's Dance Underwater, you are being labeled "alternative rock". How do you feel about the labels, past and present, and do you feel they are fair assessments of your talent, your art, and your music?

That was a quick answer! Good. Throughout your career, is there one particular song that you thought should have been a hit, that wasn't?

I’m not very good a choosing my own songs. You tell me.
OK, since you asked. Off the top of my head I think one of your newest songs, "Flying (The Beautiful Blue)", as well as older songs "In A Lonely Place" (from 1992's Heavenly Bodies), and "It'll End In Tears" and "Why Can't I?" (both from 1990's Kiss Of Life), should receive, and received, significant radio play. Or however it's done these days (a computer algorithms making decisions?).

Lastly, what is a question you wish someone would ask you (and what would your answer be)?

I wish I could just put music out & never have to comment on it. That’s my plan...

Dance Underwater was produced by Peter Walsh, for the West World Recordings label. Gene Loves Jezebel has plans on some Japan and Europe shows before year's end, and are planning on a small US tour in 2018 as "Gene Loves Jezebel with Jay Aston".

STURM CAFE • ‘WE DO ENJOY THE 100% CONTROL BUT IT COMES WITH GREAT FINANCIAL RISKS’
SWEET WILLIAM • FOR ME MUSIC IS GOOD WHEN IT LEAVES YOU ROOM FOR YOUR OWN ILLUSIONS AND OF COURSE A CERTAIN DEPTH’
THE VIOLENT YOUTH • 'When you see that some chords that you have composed become a song, it's a very special feeling.'
BLANCMANGE • 'We were making experimental music for a while, really just for ourselves, not thinking anyone would want to listen.'
A SPLIT-SECOND • Marc Ickx talks about A Split-Second
KOL BELOV • I make strange animations, that look like music videos and strange music videos, that look like animation.
THE HORRORIST • 'Sometimes I cringe when I hear some of my songs about sex or pain but at the same time it’s my diary.'
PARADE GROUND • 'We play with our figure as acrobats. We see the audience as instruments and love to play with them.'
SOL INVICTUS • Tony Wakeford Talks About Sol Invictus
NO MORE • 'We are preparing a mind blowing show of raw, pure Rock'n'Roll.'